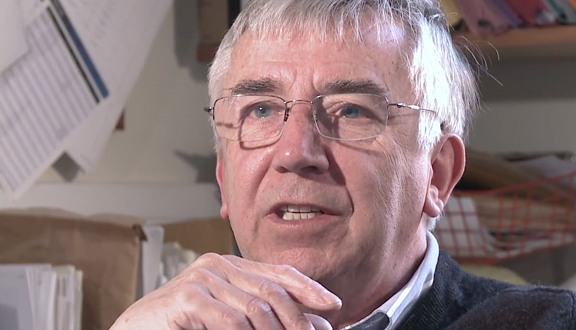 Mike Hall describes the practice and equipment of radiocarbon dating.

C14 dating is based on the C14 in the atmosphere that’s absorbed by organic material. So when the organic material dies then the C14 starts decaying and this is how you do C14 dates, because it has a half life of about five and a half thousand years. So it gets half as active every five and a half thousand years. You put your sample inside the furnace tube and passed a string of oxygen round the outside and down the inside of it and with Bunsen burners you burnt this under vacuum. It produced a carbon dioxide gas and other gases as well and this went through potassium propanganate, I think it was, and then was collected as barium carbonite, by bubbling the – barium carbonate, by bubbling the CO2 gas through barium hydroxide. And then the barium carbonate was dried and this contained the CO2 gas that you wanted to analyse. The CO2 gas was then liberated by adding acid to the barium carbonate producing the CO2 gas and this was then purified again through another drying trap and then into the main central area where the CO2 was analysed. In the centre of the room was a large selection of glassware and we were able to handle something like twenty different samples at a time. And it was a manifold system with glass thimbles coming off them, which is shaped very much like a carrot, and you could freeze your carbon dioxide sample into those with liquid nitrogen. So this would freeze into the vacuum system and then you could shut it off and you could store it in these glass bulbs. And then it would subsequently be purified by passing onto various furnaces and chemicals and then transferred into what we called a counter, which is a proportional counter, which is a copper cylinder, which has a sensor wiring down it with a high voltage and you can see a number of pulses hitting this that are generated from the carbon dioxide in the – in the gas. With this new system you then actually had a digital display and you – over a certain period of hours, you used to count the number of beta particles that were hitting the central wire. And depending on the number of particles that were hitting the central wire, you could see the age of the material, because if a thing was younger there were more particles to hit the central wire and if it was older there were less. So if you had a material or sample that was particularly old, you had to count it, as it was called, for a number of days in order to get enough particles – enough for a measurement. We could go back to probably maybe 40,000 or 45,000 years.

Mike Hall describes the revelation of glacial and interglacial cycles in deep ocean cores in the late 1960s and early 1970s.

Senior technician and laboratory manager Mike Hall reflects on his retirement from the University of Cambridge where he worked with mass spectrometers to determine past climates from deep sea sediment cores.

Mike Hall: how to determine climate history from cores of deep sea sediment