Norman Smith: the family back at home 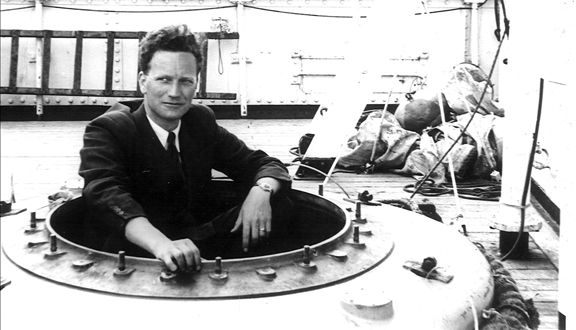 Norman Smith tells stories of his wife and children coping with his periods away from home on oceanographic cruises in the 1950s and 1960s.

Well, we had another friend in Beacon Hill and the – I used to go to sea quite a bit, so my wife and she had both had children about the same age, so she joined up with them and made it a sort of – a group, the two of them. Of course it stopped her from being too lonely, just looking after the children. But they did very well at the local school.

What do you remember of sort of particular things that you might have done with your son or your daughter?

I don’t know. I say that my son, when he was about six years old, wanted to use the petrol mower, so I gave him the problem. The petrol mower was twelve inch wide. You had to overlap by two inches, how many times you went up and down the lawn and that sort of thing. He used to love doing that sort of thing. I made all the children’s toys for them. In fact I used to do Thomas the Tank Engine with a – a milk tin and cotton reels and things like that [laughs].

And as the – as they grew up, as the children grew up, what was their level and nature of interest in what you were doing at work?

Well, all they seemed to be worried about, me going to sea. In fact one time when I went to sea, I think Diana was ten years old and she wrote a letter to me when we called in at Lisbon at one time. And she said, ‘Hello Daddy, I hear a beard you have grown. Please keep it on till you get home. Long and curly may it be. Please leave it on for me to see.’ And that was when she was about ten years old [laughs] and that sort of thing. They wanted me back, I think, but I had to do the things for my job.