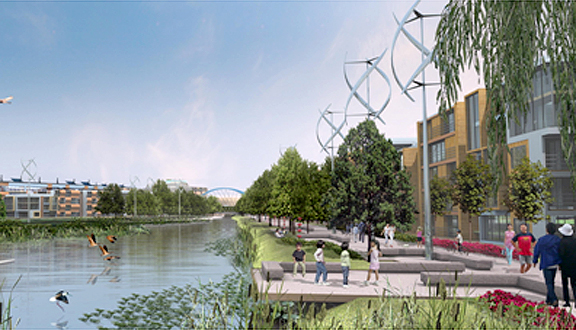 So the sort of things we discovered, which were quite transformational, first of all the client wanted to run this on renewable energy.  And for electrical grids, most people probably would know that we are – you are talking about wind, solar energy, tidal energy, all sorts of things are possible.  But for transport it’s not at all straightforward, because transport hasn’t moved to a point – you know, we’re still using petrol and diesel.  So there, we were basically saying to ourselves, ‘What on earth do we do about renewables?’  We at that stage didn’t think biofuels made a lot of sense, because China didn’t see – didn’t have the land area to grow biofuels particularly, so they weren’t interested in biofuels.  They were very interested in electric cars and trucks, and potentially in hydrogen fuel cell development.  So basically we decided to have a city that we ran entirely with electrical hydrogen fuel cell cars and vehicles, no petrol or diesel engines at all, because we want it to be all renewables.  And that then led to some very exciting discoveries.  Because what we discovered was, if you have a city with – entirely with those vehicles, they don’t emit noise and they don’t emit pollution.  And those are two big issues.  Now every building the world, currently, is designed – the skin of the building is designed to keep pollution and noise out.  Our building designs are now standardised around that, the need to do that in cities.  Whereas we suddenly discovered we didn’t need to do that anymore.  So the building designs could be quite different and they, we could use what we call natural ventilation.  So instead of having a closed box, where you have to have air conditioning and vent, you know, forced systems, you could open windows, you could have natural ventilation flowing through, which would enable cooling to happen in the summer.  And therefore the energy consumption of the buildings went down dramatically as a result of that new thinking.  So actually we found a sort of collapsing down of energy needs in the city, through a process of evolving a completely different approach.  And that was just one example of lots of other examples, and by using trees to shade naturally ventilated buildings you could also reduce heat gain and so on.  So we began to discover we could have dramatic improvements because of this sort of systems approach.  And we then got into food growing in the cities, you know, growing food on rooftops, growing food in underground situations with – with artificial lighting, of recycling water into food growing, recycling nutrients from waste into food growing.  All of these things we were discovering were very exciting opportunities, of using a given set of land to enable people to live off a lot of waste and to live a lot more efficiently.  But actually the city doesn’t look any different.  It’s four to five storey buildings, not very tall buildings, it’s canals.  And it probably looks a bit like the Regent’s Canal area in London, fairly high density four or five storey buildings, some of them more industrial, some of them residential.  Nothing very radical in the look of it, lots of green, lots of walking and cycling.  Not very many big roads, so most of the roads are dead ends, so you have to use the public transport or walk and cycle to get around the city.  So the roads are not conducive to getting in your car, they’re conducive to walking and cycling and using rickshaws to move stuff around, but modern versions of those.  So in some senses it’s a very different place to live, but actually the look of it isn’t so different.  It looks really a nice place, actually.

Are there any sort of metrics you can give me for how much more efficient this is than a traditional city?