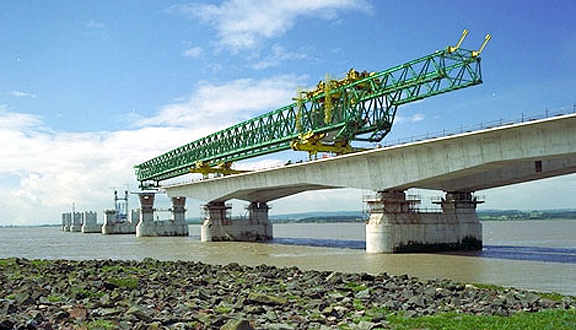 It was quite long hours, particularly in the summer because the contractor tended to use the long hours and, because we were in Scotland, tended to use the better weather and the long hours to try and get ahead of schedule, so during a summer, you know, we’d be at work at – before eight in the morning, probably half seven in a morning and probably wouldn’t leave till nine at night, so pretty long days really. And it’s quite physically exhausting ‘cause you’re up and down huge long ladders, up and down these very high piers and crawling around on steelwork and up and down ladders and in and out of things and setting up equipment. And – and in the winter, you know, very cold winds and extremely cold conditions, where even with gloves and heavy coats on you were frozen really, and pretty wet at times having to carrying on in, you know, seriously heavy rain and cold conditions. So it’s quite a tough environment to do precision work in and I suppose what I learned is that you can do precision work in very tough environmental conditions, which is something perhaps not a lot of people think a lot about, but actually that’s what civil engineering often is. Setting out lines and levels and, you know, positions within four or five, six millimetre precision right on the top of a thirty, forty metre high column you’re setting bearings out to position them both horizontally and vertically within two or three millimetres tolerances, is quite a detailed and important issue. And also things like watching the impact of sun, and the variation of the sun was expanding and contracting girders and things like that, you know, when you’re in – thirty metres in the air and you’ve got a piece of steel there and the sun comes out shining on one side, it acts like a bimetallic strip and it starts bending horizontally so it then tends to move horizontally quite significantly. And so when you’re setting things out you have to allow for all of those things and make sure that you either go and check things in the middle of the night or very early in the morning before the sun comes up so that you know things are in the right place. So that it’s quite – the precision is quite complex, it requires a lot of brainpower to figure out how to do that. And you get different temperatures horizontally and vertically because if you get ice on the deck and not on the underside you get a difference in temperature too, so it’s quite complicated. Well you’re calculating it and measuring it all at the same time, yeah, so you’re checking what it does during a day when the sun comes out and it moves so you’re measuring that and then seeing where it comes back to in the evening and things like that. And all of that gives you confidence that you understand what’s going on, so to some extent it’s a process of constantly monitoring and measuring the movement of the structure. And then of course what happens in very high winds as well which is another big issue on an – exposed construction sites, it’s making sure everything is stable and is not going to bounce around to do anything unusual in high winds. So there’s a lot of things to worry about most of the time.