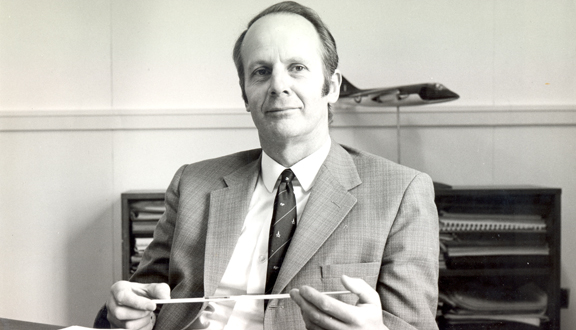 When did you decide what you wanted to do next?

Well, in leaving Cranfield I wrote to all the light aeroplane companies. I’d learnt to glide and fly at Cranfield. There were, before the War and during the War, companies making light aeroplanes, trainers and things like that, and I wrote to all likely ones, Percivals, Miles, Airspeed, Austers. And my idea was that if I wrote to the right aeroplane company I would have a reasonable chance of being able to fly in the company’s products. So I wrote to all these people, but labour was still controlled after the War, either through financial limitations or because the Ministry only wanted to put people into companies where they had contracts, which meant military contracts at the time. So all the light aeroplane companies wrote back and said, ‘Thanks for your interest in our company, but at the present time we are unable to offer employment, however should this change we would very much like to hear from you again,’ that sort of answer. So willy nilly I had to look at the military aeroplane companies. And having learnt to glide, I thought the best gliding club in the country at the time was the Surrey Gliding Club at Redhill, two aircraft companies that one might cycle to and fro from, were at Vickers at Brooklands and Hawkers at Kingston. So I ended up being interviewed by those two. And Vickers did big aeroplanes and they wanted me to go into the stress office. And Hawkers did little aeroplanes, fighter aeroplanes, and offered me a job in the experimental drawing office, which suited me better, and they also offered me five shillings a week more than the people at Vickers. So I ended up at Hawkers. Well the interview at Hawkers was by Sir Sydney Camm and his number two man, Roy Chaplin, and Sir Sydney was a very odd character indeed so it was a very odd interview. It ended up with him spreading out three view drawings of some of their latest ideas and saying, ‘What do you think of that?’ I was sitting in an easy chair which had, I guess the springs had gone a bit, and you either sat right forward on the edge of the chair, or if you sat back you practically disappeared from sight behind your knees. So I was perching on the edge of the chair and trying to look alert and all that good stuff. The secretary came in and produced gingerbread biscuits and a cup of coffee. So I was sitting perched on the edge of the chair with a cup of coffee and a couple of gingerbread biscuits in a saucer, trying to answer questions. And if you’ve got a mouthful of gingerbread biscuit it's [laughs] fairly explosive, it wasn’t a good mixture. However, despite all that, and I remember towards the end I had to think of something to say, I asked if it would be easy getting digs there, and Sir Syd of course didn’t know and neither did Mr Chaplin, it had been a long time since they had lived in digs I’m sure. So Camm got his secretary to get so and so in. Anyway, four chaps came in eventually, and they all stood there looking thoroughly uneasy, thinking what is it this time, you know. [Laughs] And he asked them how easy it was to get digs [laughs] in the area.