Ray Bird: the bookies and the HEC computer 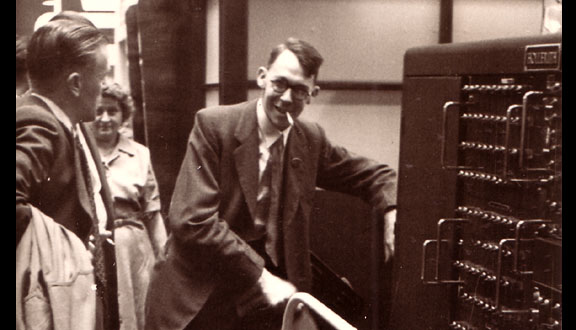 The newspapers, just typical of newspapers, would get hold of this and get hold of the wrong end of the stick and produce all sorts of sort of rubbish in the newspapers, you know. ‘Genius’s overthrow, total computing ability for business,’ I’m inventing that, but right over the top. The forward looking companies knew that computers were coming along, they didn’t know what they were, but they determined to find out. And one of the companies that was strongly knocking on our door was the bookmaker, William Hill. And two Rolls Royces, with our salesman in tow, came to see us, and drew up these guys with their sort of black coats and hats that looked like something out of the Mafia, you can imagine. Came and looked at this and we said, ‘Well why do you want this, what’s it for?’ He says [adopts accent], ‘Well, you see, it’s like this, mate,’ not, I’m being a rude there, you see. But they had a what I might call a betting edge on his – on their voice, ‘Well what have to do is, normal bets, no trouble, but there’s things called accumulators, which means that if you say I win that, all my winnings put on this next one, and if I win that, all my winnings on that one, and then if I win that, all – and on. So accumulators almost always fail because the odds on getting these right are very low. But if they win, we’re in dead trouble. And we have skilled men whose brains work out odds because they live with it all the time, they know the odds on anything, but accumulators are just a bit too much for them ‘cause, as you can imagine.’ There were permutations on the accumulation process as well, such as if I miss that one then I’ll go over and try that one, or so forth. ‘So we’re looking at it as a possibility of quickly calculating the odds on accumulators, could you do this?’ ‘Oh right, I can’t see any trouble at all, if it's definable.’ And so we talked about this. And as we were saying goodbye to them, I said, ‘Well it’s lovely to see our machines possibly being used for sporting purposes,’ and a hard grim – grim look came over the chaps, ‘Brother, this is strictly business.’ [Laughs] And off they drove. [Laughs]