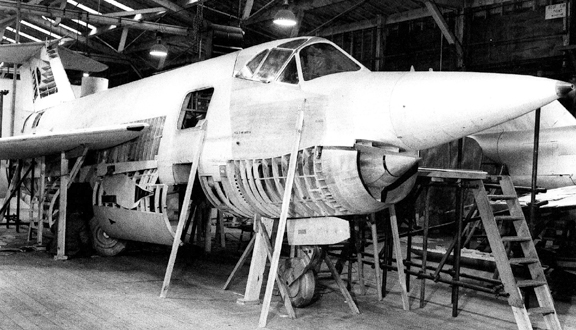 Show full transcript
The chief designer had come up with a concept on a fighter aircraft with a turbine engine and a – a rocket, so that it would have the capability of a really high rate of climb to intercept a Russian bomber coming to do us damage. And this was very advanced and had a very thin wing. It was called the SR53. It never actually got a name. Almost immediately the – as usual, the government required a higher carrying potential for things like radar being advanced and all sorts of things like that, so it had to carry a higher weight. And we built – so it was called the SR177 and it was just a slightly grown up version of the SR53. It was a superb fighter, oh yes. It was just a grown up SR53. And all the – the signals coming back from pilots were how good an aircraft it was. And we had formed a production line for this and everything, very roughly got through ninety percent of the design and fifty percent of the structure in the factory and – what was his name? Sands, was it Sands? Sandys? Decided that the only defence we needed in this country could be provided by guided missiles, and so they cancelled all the fighter aircraft that were in – in vogue at the time.