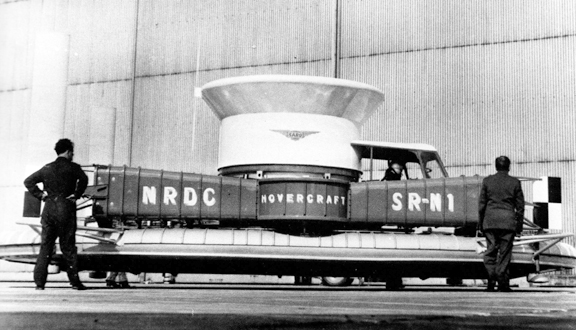 Show full transcript
And we put a proposal to make a manned hovercraft to test the principle. And that – we got a contract to build it. It was only a few months later and we had built the thing. And it was christened a Flying Saucer, ‘cause it looked like one. It looked like a saucer, almost round. It was supposed to be slightly elliptical but we found it was much cheaper to make two round bits, a bow and a stern that was round, and then two straight bits joining on together. The – it was a platform and duct that was something like two feet deep altogether and round – and almost round. And then there was a cabin plonked on the top of that and an engine intake with the engine in it in a cylinder on the middle. And so all you saw really was a – a large saucer with a cabin on it and a – and an air intake. So it did look like a saucer. And because it wasn’t on the sea or on ground it was flying, so Flying Saucer. Well, we were chuffed, of course. I mean, we’d designed this beast and, er, we were very glad that it worked. Not that we’d had a – that’s the strange thing about design teams. You don’t expect what you’re designing not to work. That just doesn’t occur to you. It’s going to work and we’re going to make it work. And that’s something – you don’t even think about failure. You think about failure in the sense of if some precaution’s needed for something going wrong. You do that but you’re not expecting it not to work. You’re expecting it to work. That’s what you’ve designed it for.