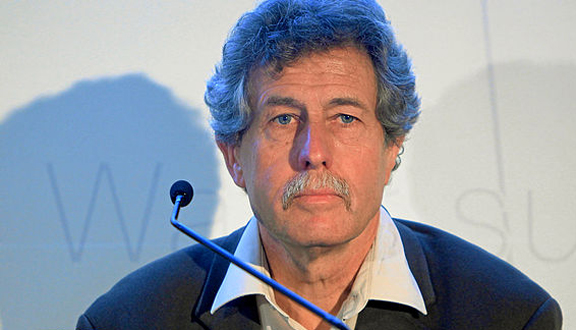 Tim Palmer comments on discussion of the merits of probabilistic weather forecasting with his 'weather aware' golfing friends.

Show full transcript
I suppose golf, you know, I play … golf is another [laughs] sport I took up and I got kind of attached to the game somehow but golfers are certainly very kind of weather aware [laughs] and, erm, especially retired golfers, they tend to sort of plan the day that they go out and play golf with their mates, they look at the weather forecast and if there was a smiley sunny face on the forecast for Wednesday then they go out and plan their golf then. And then of course if it turns out to be rainy they get angry and often I'm the person they take out their anger on. So it sort of comes down to the point that – it comes down to the principle you know you can be right ninety-five per cent of the time but if you’re wrong five per cent even, you know, and somebody’s invested – you know, people have invested their time on the basis of that you’ll get criticised. You know, we know that weather forecasts are enormously more accurate than they were, you know, thirty or forty years ago as a result of better computers, better data, satellites and so on, and yet the world still is chaotic, I mean that’s a basic feature of the, you know, of the underlying equations, there’s nothing you can do about that. And that’ll mean from time to time the inevitable uncertainties in the model and in the data will make the forecasts – well if it’s a single deterministic forecast it’ll make it wrong. And so I am – you know, I am aware of the fact that, as exemplified by golfers but I mean I’m sure it’s true for all sorts of things, people – you know, people remember somehow when they plan to do something on the basis of the forecast and the forecast was wrong, and they kind of forget the other 100 occasions when it actually wasn’t that bad. You see the problem is that what I would like to do, and I do, I mean when I have enough time I do do this, I explain to them how forecasts are by their nature uncertain and whilst most of the time actually we can be confident in making a sort of prediction for say up to five days ahead for the coming week, there are certainly many cases where we can’t and we can quantify that uncertainty and in principle that can be used to … inform their decision. The fact of the matter is if they want to – if they were so inspired, you know, where would they go to get that information because the public – sorry the newspapers don’t publish it and the, you know, on the TV and radio there isn’t that information. So if people want to actually look to see how certain that smiley sunny face on the Wednesday really is, is it really ninety per cent likely that it’s going to be like that or only, you know, forty per cent likely or something. There’s nowhere they can get that information.