Edited extract from Helen Pankhurst's Deeds Not Words: The Story of Women’s Rights – Then and Now

In this edited extract from Deeds Not Words: The Story of Women’s Rights – Then and Now (Sceptre, 2018), Helen Pankhurst explores why, 100 years on from some women being granted the vote, the suffragettes continue to hold our interest.

Although the suffrage campaign, now identified as the defining element of first wave feminism, was momentous in its own era, its influence and that of those involved continues to resonate in the ongoing feminist narrative.

There are four interlocking reasons for a cultural resurgence of interest in the suffragettes. Firstly, their cause was just and most people now agree with women’s suffrage, which has been granted on the same terms as men, almost universally. Women were finally given the right to vote and stand in municipal elections in Saudi Arabia in 2015, and the Vatican remains the only state where women do not have voting rights. In the preface to my grandmother Sylvia Pankhurst’s first book, The Suffragette, published in 1911, her mother, Emmeline, wrote: ‘When the long struggle for the enfranchisement of women is over, those who read the history of the movement will wonder at the blindness that led the Government of the day to obstinately resist so simple and obvious a measure of justice.’[1] 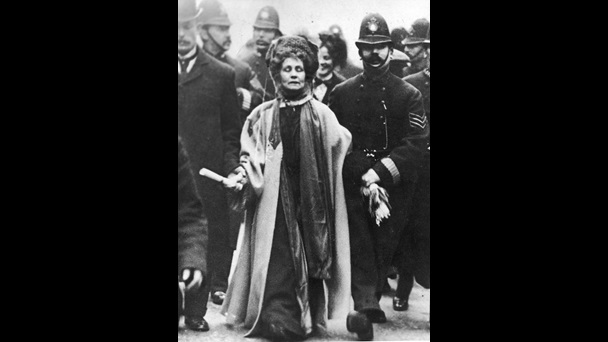 Emmeline Pankhurst is shown in this photograph, flanked by police officers, during the WSPU’s militant campaign for women’s suffrage.

And wonder we do. The absurdity of the government’s longdrawn-out opposition to women voting is expressed in a letter of 20 March 1912 by Myra Sadd Brown while serving a sentence of two months’ hard labour for window-breaking at the War Office. She comments: ‘Mrs Pankhurst and Ethel Smyth came back to this wing yesterday... Oh just fancy these two great women sitting sewing all afternoon on garments for prisoners – can you imagine anything more ironic, it certainly does seem that the world is topsy-turvy. Why not put Asquith and Sir E. Grey to blacking boots?’[2] The topsy-turvyness has, to some extent, been rectified. Years later, reflecting on the struggle, another suffragette, Audrey Rees Webbe, remained both proud and incredulous. ‘I wouldn’t have missed it... Oh it was marvellous! Just marvellous a cloud had been lifted off you... Big celebration oh yes I mean it was so ludicrous because you were a woman, ridiculous, ridiculous, that everybody could vote except women, imbeciles and criminals.’[3]

The second reason for the interest in the suffragettes is the appreciation of the unstinting courage and incredible physical and emotional strength the women showed. They faced private and public ridicule and years of setbacks from a brutal and repressive state. The campaign became ‘for freedom or death’ and the ultimate cost was paid by a few, including Mary Clarke, Emmeline Pankhurst’s sister, who died in 1910 two days after being released from Holloway Prison, having been on hunger strike and forcefed. Then there was the death of Emily Wilding Davison. She had been force-fed 49 times and following many other forms of defiance her dramatic act of resistance was at the Derby in 1913 when she was knocked over by the horse ridden by the king’s jockey. She died soon after. Captured on Ciné film and replayed ever since, her martyrdom became an iconic image of the struggle. 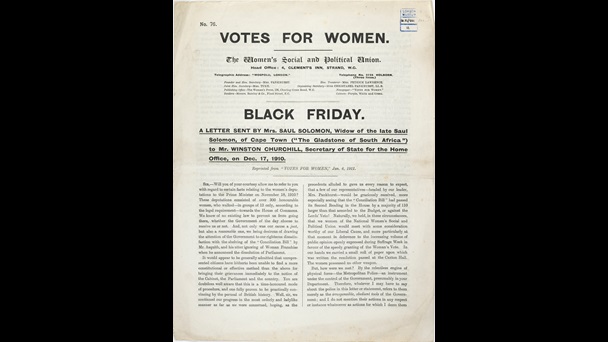 This letter from Mrs Solomon to Winston Churchill details some of the brutality that suffrage campaigners received from the police and public.


Held by© Museum of London

What is striking is the contrast between the suffragette’s femininity, purposely reinforced by particularly feminine attire, with the brutality they faced. The tragedy of the sacrifices continues to be deeply moving. June Purvis, one of the foremost scholars of suffrage, commented:

I can remember when I was filming for a TV programme about Emily Wilding Davison, being allowed to hold in my hand the small, brown leather purse that was on her person that day. It was a poignant moment. There is something about the physicality of suffragette ephemera that is deeply moving – the letter of a suffragette prisoner written on toilet paper with a blunted pencil because writing materials had been denied her, the small purse of a suffragette who died as she was making her protest.[4]

Modern day feminists are often asked if they would have been suffragettes. Most respond they hope so, but they fear that they might not have had the courage to speak up and engage in direct action. Yet women still give thanks to the suffrage campaigners for their bravery and feel inspired to make something of their lives as a consequence. Dee, Annie, Alexander and Noor provide examples of such testimonies:

It is through the acts of such women that I’m able to do my job today. (Dee Collins, chief constable, West Yorkshire Police)[5]

Just as I inherited my rights through the noble and dedicated effort of the Suffragette Movement, I feel it’s incumbent upon me to engage and make a contribution towards global justice, protection and rights for women and girls around the world. (Annie Lennox, singer and campaigner)[6]

The Pankhurst legacy shows it’s possible to make a revolutionary step for women, that equality and empowerment doesn’t just make an impact in your lifetime, but affects generations of women to come. (Alexandra Thacker – aged 17)[7]

The third reason for the embracing of the suffrage activists is that they appeal to people from all backgrounds and across the partypolitical spectrum. The campaigners themselves came from different walks of life, there were factory workers to aristocrats and they provide role models for women from the far left to the far right, and anywhere in between.

A final reason is that, in the sometimes colourless and drab roll call of history, the suffragettes showed panache and humour, using symbolism and merchandising – everything from cups and saucers, to games, jewellery and clothes. They took politics from the tea room, to the street, to the hustings, to wherever they could. They protested at theatres and cinemas. Holiday campaigns took place from the Isle of Man to the Kent coast; women interrupted church services to pray for hunger strikers and were violently ejected for their daring. Other tactics included a boycott of the 1911 Census,[9] with women hiding or partying away from home. Many refused to fill in the census or commented on the form: ‘No vote no census’, ‘If I am intelligent enough to fill in this census form, I can surely make an x on a ballot form’ or ‘Dumb Politically, Blind to the Census, Deaf to the Enumerator’. At least one respondent put ‘not enfranchised’ under the disability column. Emily Wilding Davison hid in a broom cupboard in a crypt in the Palace of Westminster, recording the House of Commons as her location. Her protest managed to combine the imagery of the broom cupboard – a domestic feminine preserve – the religious associations of a crypt, especially important to many suffragettes, and the goal of residence in the Houses of Parliament. 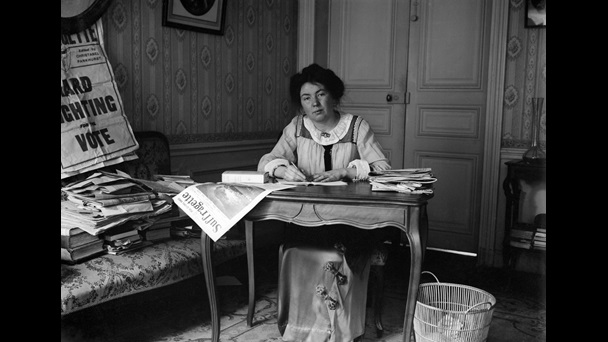 Photographs of the East London Federation of Suffragettes and their work 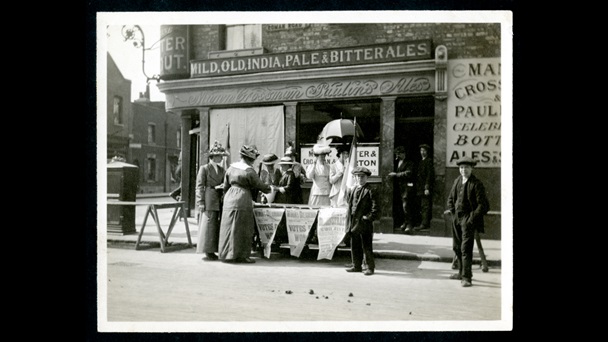 This photograph shows members of the ELFS campaigning for suffrage on Roman Road, Bow in London.

Throughout my life, I have been asked what the suffragettes would make of how far we have come and what I thought. Based on the increasing interest and my own feminist journey it felt like time to answer these questions. The result is my book, Deeds Not Words, with its long lens looking back, but also one holding a magnifying glass to the present – and with expectations of the future. It is a personal – but also a collaborative account.

[9] Jill Liddington and Elizabeth Crawford, Vanishing for the Vote: Suffrage, Citizenship and the Battle for the Census, 2014