Crossings: African writers in the era of the transatlantic slave trade

Marion Wallace (British Library) introduces the leading writers of African heritage in 18th-century Britain, and explains how the pen became a weapon against both the slave trade and the system of enslavement itself.

Between the 15th and 19th centuries, more than 12 million Africans were enslaved and forcibly shipped across the Atlantic. Over half came from West Africa.

Most of those who survived the horrors of the transatlantic crossing reached the Caribbean and North and South America. Enslaved and forced into a system of back-breaking toil and extreme violence, they resisted their captivity through open revolt, and through recreating the cultures of Africa, as well as adopting and adapting new cultural forms. A small number of remarkable men and women – Olaudah Equiano the most famous among them – published autobiographies and other literary works. This article looks at the Black writers of 18th-century Britain.

Ayuba Suleiman Diallo
Diallo (1702-?73) was a high-status, educated Muslim from Bondu, in modern Senegal. Captured by slave traders in 1731, he was taken to North America, but sought and obtained his freedom, with the help of the clergyman Thomas Bluett. He spent most of the year 1733 in England, where he became well-known in London society, was presented at court and had his portrait painted by the fashionable portraitist William Hoare. In 1734 he returned to Senegal.
It was principally Diallo’s learning, piety and personal charm that made him a success in London. While there, he scribed three Qur’ans from memory. During the course of his exile he also wrote several letters home. 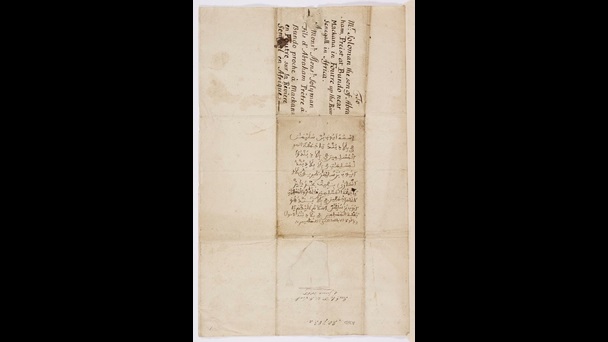 Diallo wrote this letter, in Arabic, probably while enslaved in Maryland after his capture on the coast of Senegal in 1731.

Diallo’s emancipation took place half a century before the rise of other African authors in England, and before opposition to the slave trade became a mass movement. In many ways, he stands apart from these later writers. He wrote in Arabic, did not oppose the slave trade (although he did argue against the enslavement of Muslims), and was prepared to work with the Royal African Company (RAC), which hoped for his assistance in gaining access to the gum arabic trade in West Africa. Indeed, it was because the RAC thought he might be useful that it supported his release and return to Africa. Nevertheless, his is a truly remarkable story, not least for his success in gaining his freedom and his production of Arabic texts in England at this early date.
Writing resistance: Olaudah Equiano and his contemporaries
In 1789, Olaudah Equiano (c. 1745–97; also known as Gustavus Vassa) published his celebrated autobiography, which describes his capture in Africa, his enslavement and struggle to free himself (achieved in 1766). In the book Equiano also tell of his many adventures, including his career as a sailor in the British navy both before and after his emancipation. 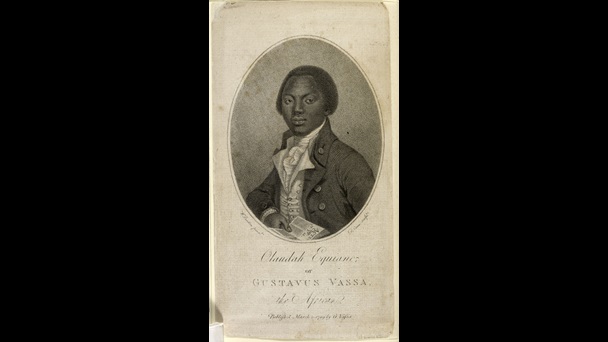 In his autobiography, Olaudah Equiano tells of his early life in Africa, his enslavement and how he gained his freedom.

Equiano eventually settled in England, where he became the leading campaigning figure among the Black population, which numbered several thousand. It was Equiano who brought the news of the Zong atrocity to the abolition campaigner Granville Sharp. The Zong was a slave ship from which, in 1781, 131 Africans were thrown into the sea and drowned in order to save water supplies for the crew and healthier captives on board.

Thoughts and sentiments on the evil and wicked traffic 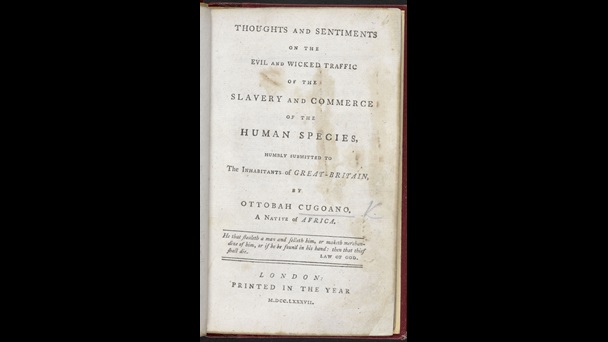 This is the first British publication in which an African writer argues for an end to the slave trade and enslavement.

Equiano’s friend Ottobah Cugoano (c. 1757– after 1791) was the most outspoken of the 18th-century writers of African heritage. In his 1787 book he condemned ‘... that infamous and iniquitous traffic of stealing, kid-napping, buying, selling, and cruelly enslaving men!’ ‘No man can’, he declared, ‘with impunity, steal, kidnap, buy or sell another man without being guilty of the most atrocious villainy’. 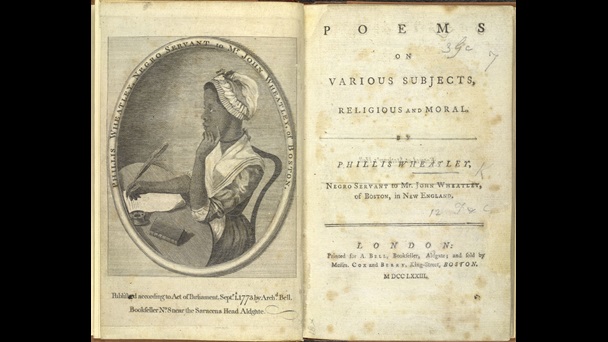 Phillis Wheatley was a literary prodigy who published this poetry collection aged about 19.

Another African author to publish in London was the prodigy Phillis Wheatley, who in 1773, at the age of about 19, brought out her collection of Romantic poetry. Wheatley, born in Africa and enslaved in Boston, Massachusetts, was helped by her ‘owners’ to pursue her vocation as a poet and allowed to travel to London.

Although her work is not explicitly political, it does contain telling comments and coded references. One of her poems, for example, celebrates Africa in a way very unusual for the time: ‘… And pleasing Gambia on my soul returns,/ With native grace in spring’s luxuriant reign,/ Smiles the gay mead, and Eden blooms again …’.

Wheatley returned to Boston to care for her ailing mistress, but it is likely that she only did so in exchange for a promise of emancipation, since she obtained her freedom shortly thereafter.

Ignatius Sancho (c. 1729–80),  born on a slave ship and enslaved in London as a very young child, is another figure of some literary standing. A writer, composer, actor, art patron, family man and eventually the owner of an independent grocery business, Sancho was deeply involved in the cultural circles of his time, and his letters – then a popular literary form – were published shortly after his death.

Sancho is often seen as a conservative figure, but he was opposed to the slave trade, which he called ‘the unchristian and most diabolical usage of my brother Negroes’. Among his many correspondents he numbered Laurence Sterne, the author of Tristram Shandy, whom he asked to ‘give half an hours attention to slavery’. Sterne replied that he had already addressed the subject with a story he described as the ‘tender tale of the sorrows of a friendless poor negro-girl’. This appears in volume 9 of Tristram Shandy.

By the early 19th century, the struggle to abolish the slave trade was succeeding. Denmark ended its transatlantic slave trade in 1803, Britain in 1807 and France in 1818. At the same time, efforts to resettle those freed from enslavement had resulted in the foundation of several colonies in West Africa. These included Sierra Leone and Liberia.

The colony of Sierra Leone 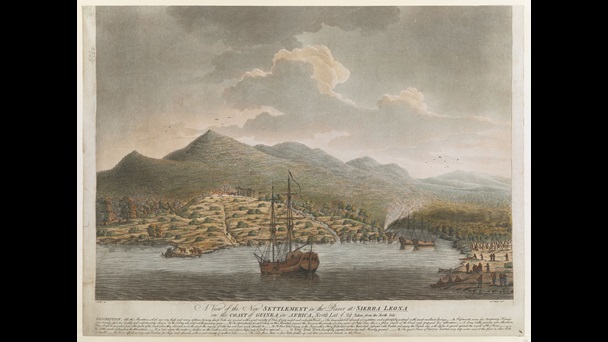 The colony of Sierra Leone was founded in 1787 to provide a home to Africans freed from enslavement.

The slave system itself was maintained for a longer period, despite the frequent rebellions of enslaved populations and the surging political campaign for emancipation. In Haiti, Toussaint L’Ouverture led a successful uprising, becoming the first governor of the independent island in 1801.

In Britain, written accounts by those who had experienced enslavement at first hand continued to play a crucial part in raising public awareness. A rare autobiography dictated by a woman, Mary Prince (1788–1833), was published in London in 1831, stripping bare the the slave system in all its brutal detail. 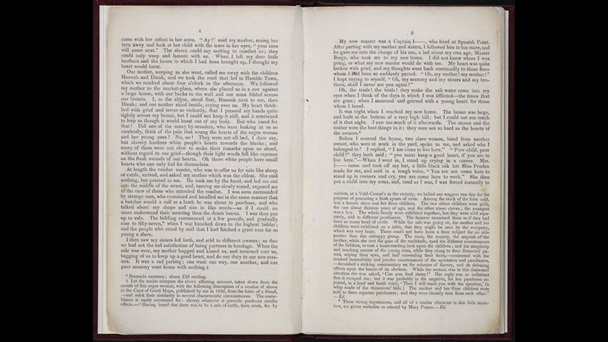 In British colonies, resistance came to fruition when, on 1 August 1838, enslaved people won their freedom. This day saw the end of a period of ‘apprenticeship’, which had effectively prolonged the system of enslavement even after it was made illegal in 1834.

The illustration below is dated 1834, but in fact it probably shows the celebrations outside Government House in Jamaica in 1838. It is published in a book by James Phillippo, a Baptist missionary, who recorded that the island was in ‘a state of joyous excitement’, people waving banners declaring ‘We are free!’.

Jamaica: its past and present state 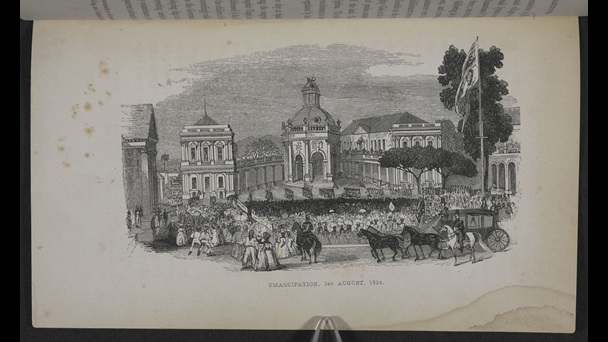 The author of this book, James Mursell Phillippo, was a Baptist missionary in Jamaica who strongly opposed enslavement.

Emancipation was a huge victory, but not an unambiguous one. In British colonies, slave-owners, not the enslaved, received financial compensation. For most, emancipation spelled the beginning of further struggles against poverty and exploitation.