Speaking out: political protest and print cultures in West Africa

West Africans made powerful use of writing and publishing to oppose colonialism and fight for independence. Since then, authors have not been reluctant to comment on the state of their nations and the world. Stephanie Newell (Yale University) and Marion Wallace (British Library) reflect on these developments.

Authorship in West Africa takes a huge variety of forms. It can mean the work of an oral historian or poet whose compositions are set to music, an Islamic scholar writing or annotating manuscripts in Arabic, or a journalist, a novelist or a blogger. The common thread is that, whether oral or written, performed or printed, West African literatures tend to be dynamic and socially responsive as well as creative and inventive. This postcard shows a photograph taken by Edmond Fortier, a French photographer, in Senegal.

Speaking out through print


West African authors have used the medium of print not only to describe the world, but to participate in it. On the coast of West Africa, an African elite started to produce printed books and newspapers in European and African languages in the middle of the 19th century. They built on technologies and innovations brought by Christian missionaries – Western education, the printing press, the roman script (now used to write many African languages) and European languages, especially English. They wrote on a whole variety of subjects, from politics to medicine, history and geography, with varying degrees of radicalism. 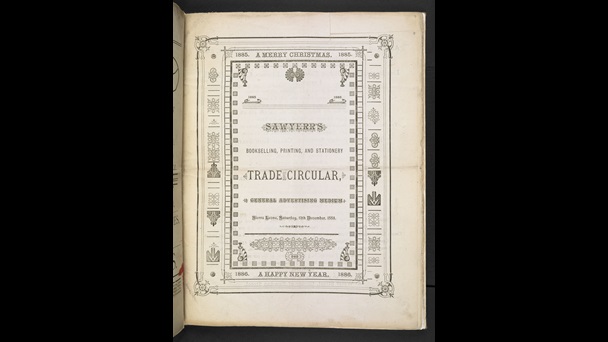 This newspaper was published by T J Sawyerr, who from the 1880s ran the only African-owned bookshop in British West Africa.

Opposing colonial rule
Colonial rule came to West Africa over several centuries, but it was at the Berlin Conference of 1884–85 that Britain, France, Germany and Portugal cemented their rule over the region. Germany lost its colonies after the First World War and by 1922, Britain had possession of what is now Ghana, Nigeria, Sierra Leone, The Gambia and part of Cameroon. Portugal held Cape Verde and Guinea Bissau, and France occupied the remaining territories, including Côte d’Ivoire, Guinea, Mali and Senegal. The only country in the region to retain its independence was Liberia, which dates back to 1820, when freed slaves emigrated there from North America; it declared independence in 1847. At the Berlin Conference of 1884–85 Britain, France, Germany and Portugal divided most of West Africa among themselves.

It was against this background of European intervention and colonial rule that West African authors used their writings to speak out against enslavement and for racial equality. They argued against colonial stereotypes of Africans as ‘primitive’, ‘savage’ and lacking distinctive cultural and political systems of their own. These authors included the leading pan-African thinker Edward W. Blyden (1832–1912), who insisted that ‘[n]o nation or race has a monopoly of the channels which lead to the sources of divine grace or spiritual knowledge’.i Blyden, originally from the Caribbean, emigrated to Liberia in 1850 and later moved to Sierra Leone. 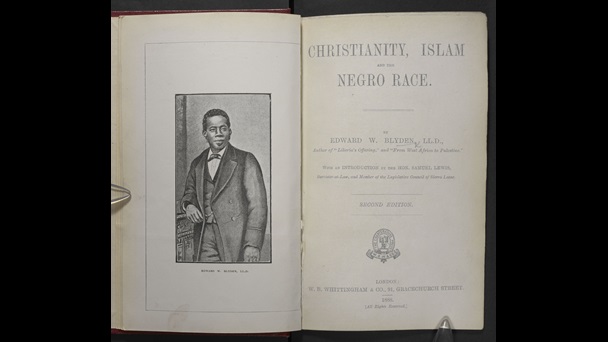 One of the major works of Edward Wilmot Blyden (1832–1912), a pioneer of Pan-Africanist ideas.

In 1911, the Ghanaian writer, journalist, lawyer and politician Joseph E. Casely-Hayford (1866–1930) published his novel Ethiopia unbound: studies in race emancipation. The book portrays the life of a highly educated intellectual, Kwamankra, who probes European religious and legal questions from the standpoint of African spiritual systems. He celebrates the subtlety and humanity of African society, which he contrasts with the European racist belief systems that underpinned colonialism. Authors such as Blyden and Casely-Hayford insisted that all humans are complex and culturally located, and that all societies have rich histories and traditions.

Most of the writers of the 19th and early 20th centuries were men, but a small number of women stood out as published authors and as activists. The earliest major female campaigner and writer to emerge was Adelaide Casely-Hayford, née Smith (1868–1960), an educator, feminist, cultural nationalist and writer who spent most of her life in Sierra Leone. She was ahead of her time in promoting female education, founding a girls’ school in Freetown, Sierra Leone. Her daughter (with her husband J E Casely-Hayford), Gladys May Casely-Hayford (1904-50), was a talented modernist poet. As one of the first writers to break away from Standard English in her poetry, she experimented with the syntax of Sierra Leonean Creole and successfully captured the nuanced voices of non-elite Africans in Freetown in her collection of poetry, Take ’Um So, published in 1948.
Another outstanding woman was Mabel Dove (Danquah), the only African woman to work as a journalist in Ghana in the 1930s. In 1954 she also became the first African woman to be elected to the Legislative Assembly of Ghana.
Dove wrote mainly for the Times of West Africa, where in 1934 she published a bitingly comic satire of George Bernard Shaw’s The adventures of the black girl in her search for God (1932), which was an attack on colonialism and mission. Dove called her version The adventures of the black girl in her search for Mr Shaw. In it, she mocks Shaw’s ‘black girl’ as ‘a very old type long gone out of date’. Dove herself creates a heroine who is a brilliantly sharp-witted ‘modern black girl’, and describes her encounters with racist colonial men, patronising white missionaries and supercilious European women.
Independence
The leaders of the generation who brought their countries to independence from the 1950s were influenced by similar thinking, although many moved in a more radical direction. The first president of independent Ghana, Kwame Nkrumah (1909-72), stated that imperialism and colonialism were ‘unspeakably inhuman’.ii  ‘We affirm the right of all colonial peoples to control their own destiny’, he declared in a resolution adopted by the Pan-African Congress held in Manchester in October 1945.iii
In 1957, Ghana became the first of Africa’s colonies to achieve independence in the 20th century. Guinea followed a year later. Most of West Africa became free of colonial rule in 1960, with the independence of France’s other West African colonies as well as Nigeria. Sierra Leone followed in 1961, and The Gambia in 1965. Guinea-Bissau and Cape Verde were the last, in 1974 and 1975 respectively.
In many of these countries, independence campaigns were led by nationalist leaders with charismatic personalities and great intellectual ability. In touch with international Pan-Africanist, and in some cases Marxist, networks, they were able to frame ideas of equality, nationalism and Pan-Africanism in a way that both reached the masses and resonated at home and abroad. They published their ideas in newspapers, which were hugely important in communicating political messages, in books, and in short pamphlets, which were easily affordable. 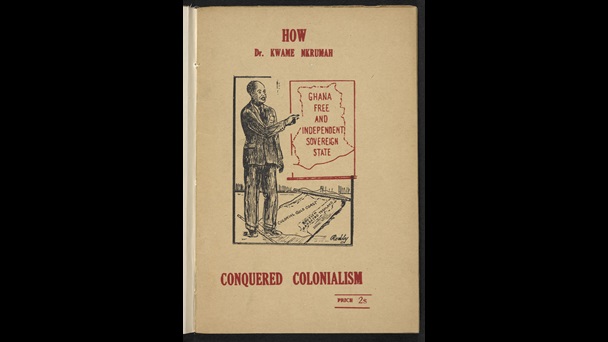 The Nigerian nationalist and first president Nnamdi Azikiwe (1904-96), for example, used his popular newspapers – including the African Morning Post in Accra, Ghana, and the West African Pilot in Lagos, Nigeria – to expose the unacceptable principles on which imperialism was built.

The first president of Senegal, Léopold Sédar Senghor (1906–2001), was an internationally acclaimed poet and one of the co-founders of the Negritude movement. This originated in 1930s Paris and aimed, through the arts, to reclaim Black identity, history and culture, oppose colonialism and assert racial equality. 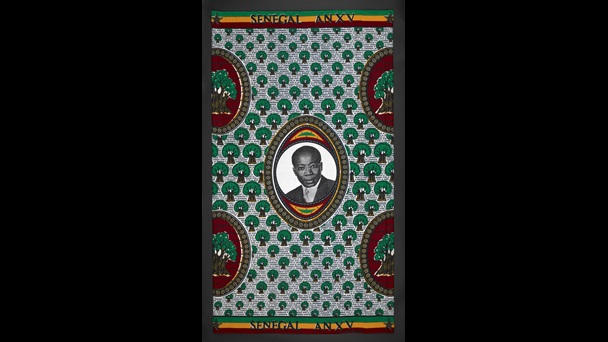 This printed cloth marks 15 years of Senegal’s independence in 1975.

In the period after independence, writers and other commentators including musicians like Fela Kuti have responded to, and shaped, times often troubled by civil war, dictatorship, poverty and corruption. They have also reflected on the damage wrought by colonialism and the hopes brought by independence.
This creativity has taken many forms in different times and places. The Nigerian Civil War (Biafran War) of 1967-70 is one example of an event which led to an outpouring of fiction and poetry. The war broke out when Nigeria’s south-eastern region broke away, as the Republic of Biafra, following a period of political instability and violence. The war caused an estimated 1.5 million deaths and ended with the defeat of Biafra.
Among the dead was the poet Christopher Okigbo, a highly regarded modernist poet who joined the Biafran army at the outbreak of the war and was killed in action three months later. Others lived to produce literature ‘out of an experience red-hot with the memories and physical wounds of a most excruciating civil war’.iv  They adopted a variety of standpoints, some, like Flora Nwapa, concentrating on the violence and damage of war, others taking a position for or against Biafran independence. 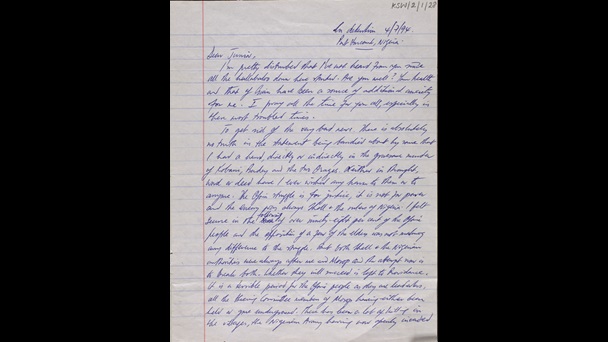 The execution by the Nigerian government of the writer Ken Saro-Wiwa in November 1995 shocked the world. This letter to his son was written from prison after his arrest.

Among Biafra’s supporters was Chinua Achebe. Those who opposed it included Ken Saro-Wiwa, whose novel on the theme, Sozaboy, deals with the experience of a minority ethnic group in Biafra. Saro-Wiwa was both a novelist and a campaigner against the devastating environmental effects of oil extraction in the Niger Delta region. In 1995, to international outrage, he was executed for alleged murder.
Writers, performers and musicians continue to engage with society, to demand rights and freedom and to reflect on political questions. Speaking at the United Nations General Assembly in New York in September 2015, Angélique Kidjo, a singer and activist from Benin, said, ‘What I want to tell [world leaders] is…the world we’re living in won’t be sustainable if we don’t share its wealth more equally. And we have to work at this every day, every hour, every minute. Each of us with our own voice.’
i EW Blyden, West Africa before Europe and other addresses delivered in England in 1901 and 1903 (London: CM Phillips, 1905), p. 132.

ii Kwame Nkrumah, Towards colonial freedom: Africa in the struggle against world imperialism (London: Heinemann, 1962), p. x. This pamphlet was written in 1942 but iii Nkrumah could not find a publisher willing to print it for another twenty years. Nkrumah, Towards Colonial Freedom, p. 44.
iv Emmanuel Obiechina, ‘Foreword’, in Chinua Achebe, Arthur Nwankwo, Samuel Ifejika, Flora Nwapa et al., The insider: stories of war and peace from Nigeria (Enugu: Nwankwo-Ifejika and Co., 1971), p. vi.