Spirit: Histories of Religion and the Word

Insa Nolte (University of Birmingham) gives a new perspective on the history of religion in West Africa. Indigenous belief systems and Islam have deep historical roots in the region, while Christianity is a relative newcomer. But all centre on the word, and all are still practised in the region today.

The history of religion in West Africa is the story of the enduring importance of the word, both spoken and written, which infuses indigenous belief systems as well as Islam and Christianity. While colonialism and literacy in Arabic, roman and other scripts have changed West Africans’ relationship with written and spoken words, all major forms of religious practice place strong emphasis on the word. Words link the past and the present, the everyday and the sacred, the secular and the divine. Incantation, divination, prophecy and prayer all serve as means through which believers communicate with the spiritual world. 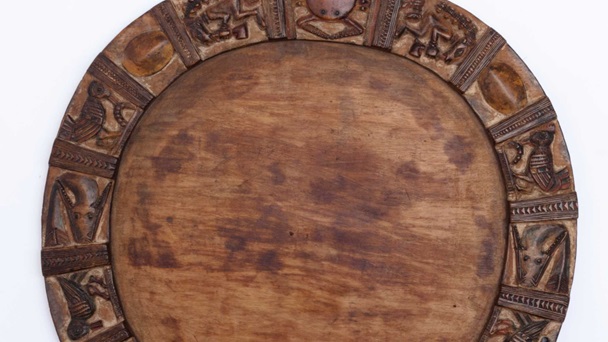 This Ifá divination board, from what is now the Republic of Benin, was used to consult the Yoruba god Ifá about problems and decisions in life.

Historically, indigenous belief systems have relied on oral genres – stories, song, poetry, praise and prayer – as well as ritual and sacrifice to appeal to divine forces. Words were, and are, seen as powerful forces in their own right, and speaking them expresses the importance of human agency, power and reflection in the encounter with the divine. The ability of humans to translate the power of the word into experience also animated communal performances. Beautiful Gẹ̀lẹ̀dẹ́ masquerades were and are popular in south-west Nigeria and Benin. These ensure the fertility and general wellbeing of the community by encouraging women to use their powers in the service of the community, rather than destructively.

Watch an extract from Gẹ̀lẹ̀dẹ́: A Yoruba masquerade

The Ifá divination system depends on a large oral corpus of songs, stories and riddles in the Yoruba language, from which diviners select texts to offer guidance to those who seek advice. As a mediator between human beings and spiritual forces, Ifá itself does not require exclusive worship, and its advice often includes suggestions about the deities and cults that an individual patron should worship.

The image below shows elaborately decorated cups for holding the palm nuts used in Ifá divination. While the nuts can be kept in a cloth bag, priests who can afford it may have cups like these carved as a special display of gratitude to the deity Ifá. 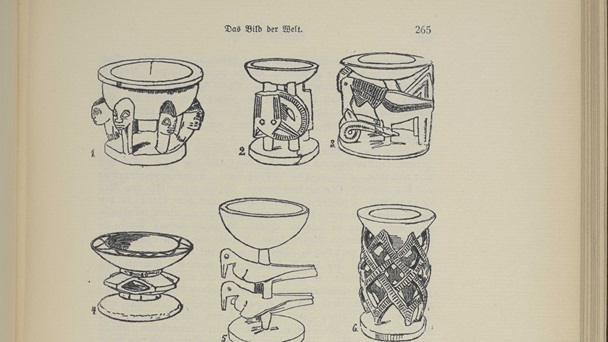 From the 11th century, as Islam expanded in West Africa, the region engaged more and more with the written word. Arabic was valued as the revealed language of the Qur’an. Moreover, knowledge of Arabic allowed West African Muslims to participate in learned debates across the Islamic world, and to document local history and cultural practices. The spread of written Arabic also encouraged the growth of other West African written languages such as Tifinagh (which is known to have been used south of the Sahara at least 1,500 years ago). It also inspired a form of literacy known as ajami, in which West Africans transcribed and recorded their own languages, including Wolof, Fulfulde, Bamanan and Hausa, in Arabic letters. But even for less literate Muslims, Islam’s spoken declaration of faith, five daily prayers and the power of the Qur’an as the word of God, affirmed the importance of the word. 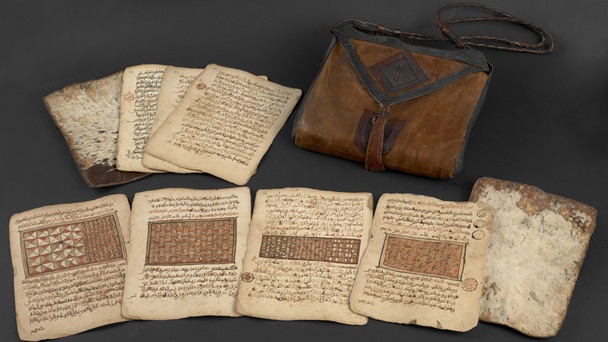 The use of Islamic texts to prepare medicines and charms meant that less-learned Muslims, and even non-Muslims, could benefit from the power of the word, while Islamic writing and calligraphy inspired art across West Africa. Held by© The British Museum

With the arrival of colonialism in the 19th century, Arabic lost some of its political and administrative importance. More recently, the rise of Reformist Islam means that many Muslims now attend secular or modern Islamic schools, where they gain literacy in both European and West African languages. The Qur’an and other Islamic texts have increasingly been translated into West African languages. But in many places pupils still learn the Qur’an in the traditional way, using wooden boards as ‘slates’. 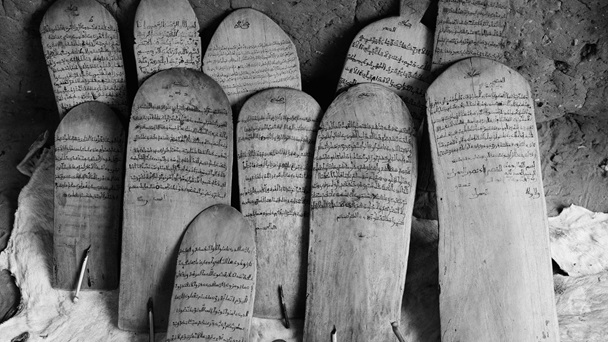 Wooden boards used for learning the Qur’an in Timbuktu, Mali, 2007

When Christian missionaries arrived in West Africa in the 19th century, they brought with them the Bible which they encouraged believers to read for themselves. Colonialism, missionary education and European-type schools all fostered literacy in the roman script.

The Book of Romans in Yoruba 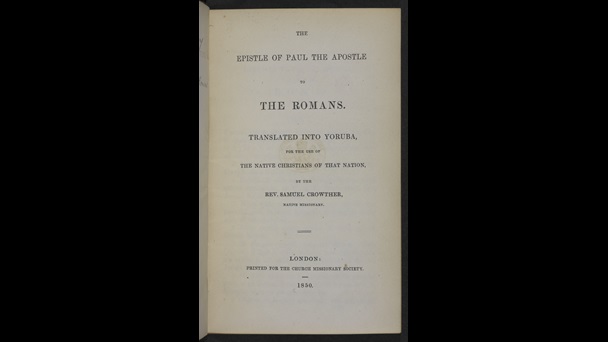 Paul’s letter to the Romans, the first book of the Bible to be translated into Yoruba.

Missionaries and West African Christians such as Bishop Samuel Ajayi Crowther (1807–91) used print technology to publish translations of the Bible and other Christian texts in local languages, and they also produced grammars, dictionaries and primers for those languages. Usually these new works were in the roman script, but the Arabic alphabet was also used for some translations of the Bible. 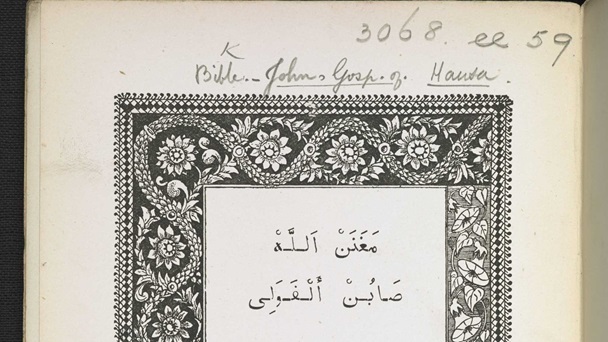 This translation of the Bible into Hausa uses Arabic letters, because the Arabic script was (and is) widely in use in the Hausa-speaking region. 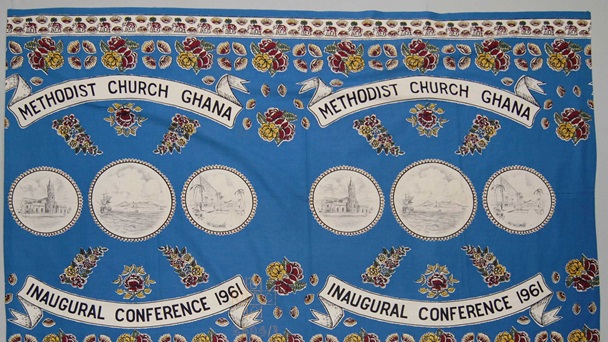 This printed cloth, which commemorates the inauguration of the Ghanaian Methodist Church, is intended to be used as a skirt.

West Africans literate in European languages had a higher status under the colonial state than those who were not, and they formed an urban intermediary class that produced new popular arts and entertainment. Literacy also contributed to West African cultural nationalism and, eventually, anti-colonial politics, by enabling the production of local histories and political writings (this topic is explored in greater detail in the article ‘Speaking out: political protest and print cultures in West Africa’).

The continued importance of the spoken word

Although many West Africans have converted to Islam and Christianity during the 20th century, indigenous practices continue to play an important role in many communities, where they are sometimes accompanied by the production of written texts. In recent decades, the desire to assert Ifá’s equivalence with Islam and Christianity has moved some reformers to produce a written Holy Book of Odù.

Despite the rise of the written word, the spoken word has not lost its relevance or divine potency. Muslims continue to privilege Arabic as the sacred language of the Qur’an, and to use Arabic to pray and praise God. Early West African churches such as the Aládùrá church, and more recent Charismatic and Pentecostal churches, encourage oral practices such as prayer, repeated vocalisation of Bible passages, public testimony and speaking in tongues. Thus even while they base their faith and practice on the Bible and the Qur’an, both Muslims and Christians continue to rely on the spoken word to actualise the promises contained within their holy texts.