The changing image of the West India Regiments

David Lambert and Elizabeth Cooper explore how the portrayal of West India Regiments evolved throughout their lifetime and how their legacy is continued today.

As the West India Regiments were based in the Caribbean and West Africa for almost all of their history, few people from Britain ever saw them in person. However, their military actions – such as fighting against the Ashanti in 1873–74 and 1895–96 – were reported in British newspapers. The Regiments also attracted a lot of public interest from the second half of the nineteenth century because of their striking appearance.

When the West India Regiments were first created at the end of the 18th century, the ordinary soldiers were dressed in the same basic uniform worn by most soldiers recruited in Britain itself. In 1858, however, their uniform underwent a dramatic change, when a more ‘Oriental’ style of military dress was adopted. This included a white turban wrapped round a red fez that was worn on the head, a red waist coat with yellow braiding and dark blue baggy pantaloons that went to below the knee.

The new uniform was inspired by the one worn by some French soldiers who were known as ‘Zouaves’. The Zouaves had originally come from North Africa, which became part of the French Empire in the 19th century – just as Britain had raised the West India Regiments in a part of its Empire. These French soldiers had fought during the Crimean War (1853–56), when Britain was allied with France and the Ottoman Empire (from which Turkey would emerge after the First World War), fighting against Russia. With their brightly coloured uniforms and bravery under fire, France’s Zouave soldiers won many admirers in Britain, not least Queen Victoria herself. She decided that some of her own military forces should be dressed in a similar uniform and the West India Regiments were chosen.

Racist caricature in a children's alphabet book: 'Z is for Zouave' 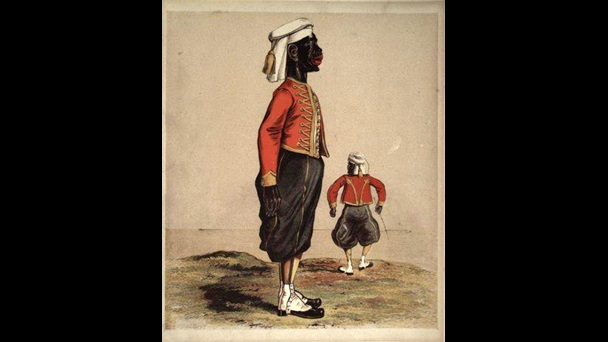 This image comes from a book for British children. The rhyme that accompanies it reads: 'Z, the Zouave costume with its colours so bright which bold Negro Infantry sport with delight. In this style were dressed The bold Second West ...' The two figures are supposed to be Zouave soldiers, however the huge, baggy pants and the thin, stick-like legs make them look ridiculous, while the portrayal of the main soldier’s face indicates this is a racist caricature.

It is significant, however, that the officers were not issued with new uniforms and wore the same clothing as other British officers who served in tropical climates. As a result, the sharp division that had always existed in the West India Regiments between the white officers and the overwhelmingly black ordinary soldiers was now reinforced by the clothes they wore.

Public knowledge of the Regiments

The new Zouave-style uniforms were reported in British newspapers and soon became a defining feature of the West India Regiments. Indeed, because they served in the West Indies and West Africa, it was largely through images of their soldiers that they became known to the British public. In the last two decades of the 19th century, public interest in and enthusiasm for the Empire grew among many British people. This was encouraged by newspapers and businesses that used images of the British Empire – including soldiers from the colonies – to advertise and sell their products.

An important occasion when soldiers of the West India Regiment were actually seen by members of the British public in person was in 1897. That summer, Victoria celebrated her ‘Diamond Jubilee’, marking 60 years since she was crowned queen. The Jubilee involved parades, banquets and church services. On 22 June a number of West India Regiment soldiers took part in a great military procession in London, marching alongside soldiers from across the British Empire. The event was watched by hundreds of thousands of spectators, and it received a huge amount of coverage in British newspapers. 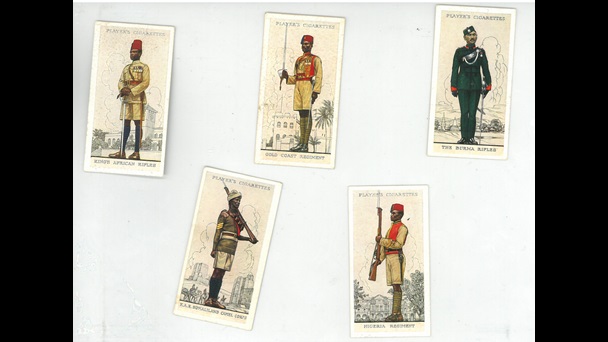 These cigarette cards show the types of uniforms worn by soldiers across the British Empire. Some of them would have been seen at Queen Victoria's Diamond Jubilee military procession.

The end of the Regiments

In 1888 all ordinary soldiers and officers of the West India Regiments had been combined into a single unit – a far cry from the peak of 12 regiments that had existed in the early 19th century. During the First World War (1914–18), this remaining Regiment fought against German forces in East Africa and later served in the Middle East. (At the same time, an entirely different military unit known as the British West Indies Regiment, was raised in the Caribbean in 1915 and also served in the war.)

There was a general reduction in the size of Britain’s armed forces after the First World War, and in 1927 the last West India Regiment was disbanded – more than 130 years after their first creation. There were plans to revive them in the late 1950s as Britain tried to combine its Caribbean colonies into a single West Indian Federation. This political union collapsed when the bigger colonies of Jamaica and Trinidad pulled out, preferring to go their own way. Both became independent countries in 1962, followed by Barbados in 1966. With no need for a combined defence force, the plans to revive the West India Regiments were abandoned.

Despite this, the Regiments live on today in other ways. The Jamaica Defence Force and the Barbados Defence Force, which defend their respective countries, trace their histories back to the West India Regiments. Moreover, their musical bands still wear the traditional Zouave-style uniform and can be seen by locals and visitors when on parade.

The Regiments have also been commemorated in various ways. Their uniforms, equipment and other items are displayed in museums in the Caribbean and in Britain. For example, as recently as 2017, a new display on the West India Regiments was opened at the National Army Museum, London, and the Museum of London Docklands. The West India Regiments have also been remembered in commemorative stamps issued by different countries and territories across the Caribbean as part of their colonial history. Given the role their soldiers played in ending popular rebellions in Barbados (1816) and Jamaica (1865), as well as in helping to expand and maintain the British Empire in Africa (such as by fighting against the Ashanti), it is perhaps difficult to know whether they should be celebrated or not.