Why did people oppose the creation of the West India Regiments?

Rosalyn Narayan explains how, when the West India Regiments were first founded, many people opposed them on the basis of racist stereotypes.

In the late 18th and early 19th centuries, many of the white slaveholders in the British West Indies, known as ‘planters’, did not want the West India Regiments to be created. This was because the planters were afraid that the creation of a permanent military unit of armed black men might be a cause of future danger to them and might undermine and reduce the power they held over their slaves. To understand why these planters did not want to be defended by the West India Regiments, we need to understand why planters would be scared of the idea of black men being given weapons on a permanent basis.

There were far more black people than white people in most of the British Caribbean islands because the white plantation owners relied on enslaved people to do the work. Therefore, people born in Africa and their descendants came to form the majority (up to 90 per cent) of the population. With white people outnumbered by black enslaved people, the planters controlled their slaves by a terrible system of violence (beatings, torture and punishments) in order to maintain their power.

It is not surprising that the planters were worried about the prospect of their slaves rebelling. Between 1791 and 1804, in the French colony of St Domingue (now called Haiti), armed slaves defeated their French masters and eventually formed an independent country without a system of slavery. This event is now known as the Haitian Revolution. During these turbulent years in St Domingue, a black man named Toussaint L’Ouverture helped lead the fight against different colonial invaders (from Britain, Spain and France) and showed the world how black troops could be a powerful force in ending slavery. Slaveholders in the rest of the Caribbean saw what could happen if slaves were able to rebel successfully. This was a terrifying prospect for planters, who wanted to make sure that they maintained the system as it was – with them at the top of society and the slaves at the bottom. 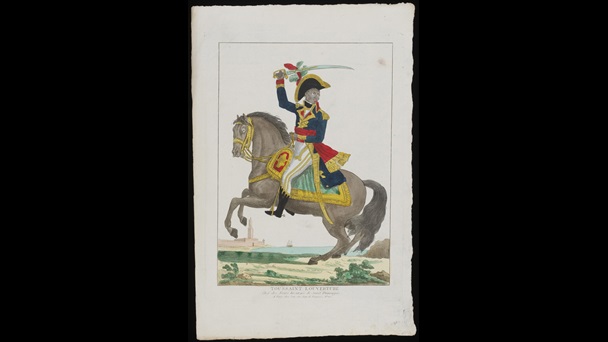 This is a very powerful picture of Toussaint L’Ouverture. He looks in total control, as if he was leading his troops into battle.

There were other events that made the planters fearful. In 1795–96 in Grenada, slaves took part in Fédon’s Rebellion to try to overthrow British power, while in St Vincent the British fought ‘Black Caribs’ for control of the island.

Racist ideas were used to uphold a violent system of slavery

In order to maintain a system of slavery in which people of African heritage were enslaved and violence used against them, white slaveholders held and encouraged racist stereotypes. This allowed them to justify to themselves, and the outside world, why they held other human beings as slaves and why they made money from the enslavement of these people. Planters argued that people of African descent were a different ‘race’ – that of the ‘negro’ (which means ‘black’) – and that their ‘race’ was inferior to that of white people. This was, of course, wrong, as all human beings are part of one human race. They described people of African descent as either ‘savage’, or the opposite, ‘childlike’, in order to argue that these people would be safer under a system of enslavement. They argued that it was better for everyone, both the slaveholders and the slaves, if black people were controlled by the slaveholders rather than being free. Slaveholders used these racial myths to justify slavery, and, under the system of plantation slavery, being ‘black’ became synonymous with being a ‘slave’.

The mutiny of the 2nd West India Regiment reported in the Savannah Republican and Evening Ledger, 23 July 1808 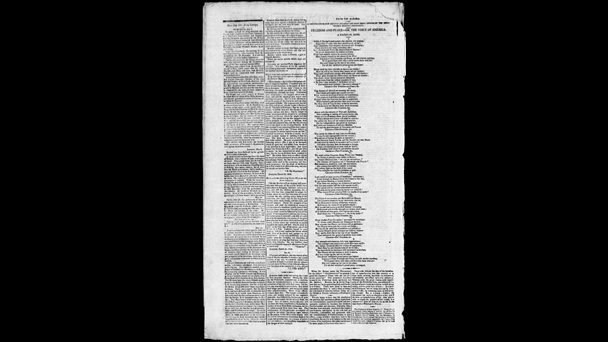 Planters opposed the creation of the West India Regiments in large part because of these racist ideas. Many felt uneasy about black men being armed, even if the stated aim was to protect the planters. This was because the beliefs that they held about black people were racist stereotypes of childlike people, or very dangerous people. The planters did not that think it was safe for weapons to be given permanently to people with these inherent characteristics.

The Caribbean had a very clear racial hierarchy, with white slaveholders at the top and plantation slaves at the bottom. The soldiers of the West India Regiments fell in between these categories. They were black men, but they were under the control of the Army, not the planters. For white slaveholders, maintaining a racial hierarchy was extremely important because it guaranteed their social position. Their concern about people who did not neatly fall within the categories of ‘slaveholder’ or ‘plantation slave’, combined with their racist ideas about black people, made white slaveholders fearful of black men being armed and not under their control.

Planters were very nervous about the symbolic message that these soldiers might send to the enslaved. They worried that if slaves saw black men with weapons they might feel inspired to fight for their own freedom, and that the black soldiers might join them out of sympathy. Planters therefore feared that the creation of the West India Regiments would encourage slave rebellions: what had happened in Haiti would happen in Jamaica or Barbados. 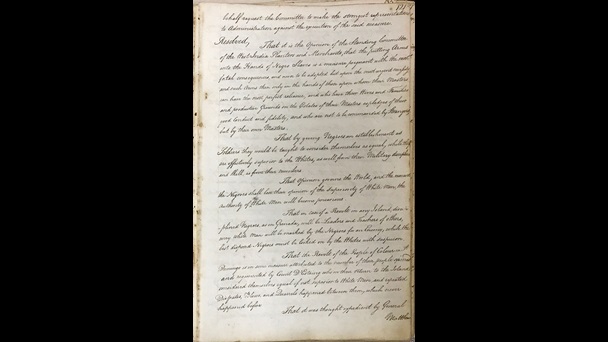 'Resolved:  That it is the opinion of the Standing Committee of the West India planters and merchants, that the putting arms into the hands of negro slaves is a measure pregnant with the most fatal consequences, and never to be adopted...'

Planter opposition to the creation of the Regiments

The decision to set up the West India Regiments was ultimately taken by the government in Britain. The colonial legislatures, which were the local governments of the British Caribbean islands and thus dominated by planters, were angry. When these legislatures were told by officials in London that they had to provide slaves for the regiments, most refused to do so.

Letter showing the opposition to the raising of the West India Regiments from the Barbados legislature, 1797 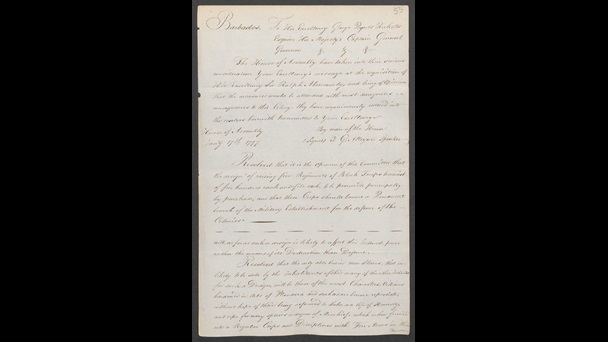 This letter letter written in 1797 on behalf of the House of Assembly in Barbados to the British governor of Barbados, George Ricketts, sets out the planters' opposition to the raising of the West India Regiments.

Opposition to the creation of the Regiments took the form of letters written by planters who controlled the proceedings of local government in the British West Indies. The House of Assembly in Barbados, for example, sent letters to the governor of the colony stating their objection to the creation of the regiments. Many of the planters in the British West Indies were part of the West India Committee. This was a powerful group representing the sugar merchants in London and the British planters of the Caribbean. All the people in the Committee had a vested interest in the continuation of slavery for the simple purpose of making money. The West India Committee held formal meetings where they agreed their opposition to the creation of the regiments. They wrote to the government in the hope that they could stop the regiments being raised.

In the end, however, the Army was able to convince the government that black soldiers were absolutely necessary for the defence of the islands and the objections of the planters were ignored. However, the refusal of the island legislatures to provide local slaves for the West India Regiments meant that the Army was forced to buy thousands of men from slave ships instead.