Andrea Levy's Small Island is a story of post-war Caribbean migration, narrated from four different perspectives. Hannah Lowe explores how the novel is intrinsically linked with Levy's own Caribbean ancestry, as well as how it has become more widely associated with the Windrush experience.

Andrea Levy’s Small Island tells the story of post-war Caribbean migration through four narrators – Hortense and Gilbert, who migrate from Jamaica to London in 1948, and an English couple, Queenie and Bernard, in whose house in London they find lodgings. Levy adopts a polyphonic narrative mode – one that draws together and contrasts the voices and viewpoints of different characters whose stories unfold in parallel throughout the novel. This mode destabilises and fragments the idea of a singular, authoritative narrative of post-war immigration, and allows us to examine the effects of imperialism on ordinary people from both the Empire’s colonial outposts and its centre – at the very moment these communities collide.

Published in 2004, the novel has become strongly associated with the Windrush experience, in part because of Levy’s biological link to the ship – her father Winston Levy was a passenger on its 1948 voyage. But although Levy uses ‘1948’ as a chapter heading and structural pivot point, the book illustrates that Britain’s black presence pre-dates this moment through its focus on the pre-1948 experiences of black people in Britain. The novel also complicates conventional Windrush tales, which often have a male bias, by the inclusion of Hortense. Her arrival in the early days of this migratory movement challenges the notion that women were a secondary or belated part of this diaspora.

Postcard of Empire Windrush purchased by Winston Levy whilst on board 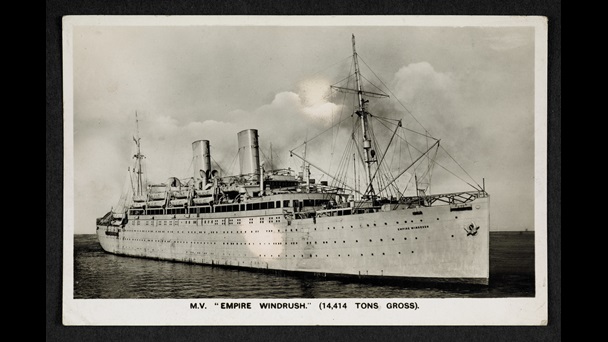 Andrea Levy's father, Winston, was a passenger on the Empire Windrush during its 1948 voyage. This is the postcard he purchased whilst on board.

Prior to writing Small Island, Levy’s focus had been on the lives of the second generation, dislocated from their Caribbean heritage and struggling to exist in a Britain that excludes them through racism. In each of her earlier novels, the migration history of the protagonists’ parents has an acute bearing on the protagonists’ lives, but it is the lack of knowledge about their parents’ experiences and more broadly their Caribbean ancestry, that impacts. In Every Light in the House Burnin’ (1995) the protagonist tells us that her father ‘came to this country in 1948 on the Empire Windrush ship’, but that he ‘never talked about his family or life in Jamaica. He seemed only to exist in one plane of time – the present’ (p. 3). In Never Far From Nowhere (1996) Vivienne and Olive also know little of the Caribbean, only that their parents travelled to England on ‘a ship in the fifties’ (p. 3). Levy hints that it is the traumas of migration that silence the parents, but in the last of these three novels, Fruit of the Lemon (1999), when the protagonist, Faith, suffers a similar crisis of identity, it is her mother who tells her ‘Child, everyone should know where they come from’, before sending her to Jamaica, a trip that helps Faith reconcile her identity as a Black British woman (p. 162). Small Island, set between the Caribbean and Britain, marks a development in the direction of Levy’s work, moving back in time to locate and explore a foundational story of belonging from a Black British perspective.

Dreams of the Mother Country

In interviews, Levy has discussed how the ideas for Small Island began to form after she ‘finally’ persuaded her mother to discuss her traumatic experience of migration, as she herself describes:

The way I remember it, neither she nor my dad ever seemed to want to talk about their lives in Jamaica, or about why in 1948 they made the momentous decision to leave that island to come to another. Whatever the truth, that silence was finally breached and my mother, reluctantly, began to speak to me about her life before I was born. I was gripped from the start as those two familiar parents of mine began to emerge as fully rounded human beings with an amazing story to tell. (quoted in Mullen, 2011)

Photograph of Andrea Levy and her family on holiday at the British seaside, 1970s 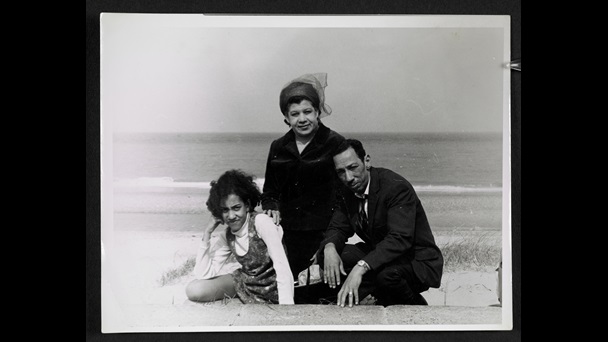 'The way I remember it, neither she nor my dad ever seemed to want to talk about their lives in Jamaica, or about why in 1948 they made the momentous decision to leave that island to come to another.’

The ‘silence’ of those that experienced the traumatic events of post-war migration to Britain is examined in discussions of trauma literature which harnesses the concept of ‘belatedness’, a theory that hinges on the ‘crisis in witnessing’ central to traumatic events such as the Holocaust, slavery and migration. Belatedness indicates the ways in which it is often the members of the next generation who articulate the traumas of those who have gone before; the voices of the older generation may have been silenced by their own trauma, historical rupture and/or lack of platform on which to speak.[1] There may be various impetuses for belatedly recounting or reconstructing these narratives – as an act of mourning, as a way to make sense of difficult events, or to create or reinforce a shared, contemporary cultural identity (Laursen, p. 55). It is this instinct to return and reconstruct which Levy develops in Small Island, using narrators from both Jamaica and England, who are deeply affected, personally and ideologically, by their encounters with each other.

For the Windrush generation, this ‘trauma’ was the pervasive popular and institutional racist rejection experienced by so many who journeyed to Britain, having anticipated finding the open arms of a welcoming Mother Country. Small Island explores how these skewed expectations of Britain were installed through the complex colonial socialisation that went hand in hand with the fact of British economic exploitation in the Caribbean. In Jamaica, Hortense is encouraged by the colonial system of shade hierarchy to see herself as superior because of her light skin. The values of this ‘shadist’ society are instilled from childhood when she is taken from her dark-skinned birth mother and placed with the wealthy cousins of her (absent) father, to be made a lady. ‘With such a countenance, there was a chance of a golden life for I’ (p. 38). She wishes to be like the white women teachers she observes at school, whose ‘superiority encircled them like an aureole’, and believes England will allow her own innate Englishness to flourish, unshackled by the mores and manners of Jamaican society, which, she has failed to realise, are a slanted reproduction of British society (p. 69). But her dream of England is dislocated from its reality, as is her sense of her own Englishness and belief that England will somehow allow her to transcend her personal circumstances.

When she arrives in London, her formal and antiquated spoken English is not understood by Queenie, a first sign of the disparity between these imagined and real England(s). Her repeated questioning of Gilbert – ‘Is this the way the English live?’ – suggests the distance between an imagined, mediated Mother Country and the realities of the dilapidated and hostile London she encounters in the post-war years. Hortense’s awakening to British racial hostility is rendered across a number of incidents, including her rejection by the teaching profession, which leads her to declare towards the novel’s end, ‘I have found this to be a very cold country’ (p. 466). 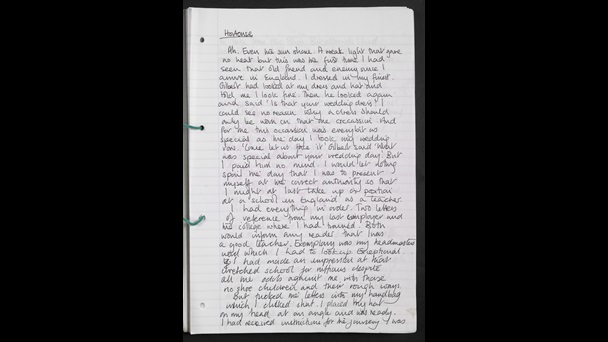 'I had everything in order. Two letters of reference from my last employer and the college where I had trained. Both would inform any reader that I was a good teacher.'

Usage terms You may not use the material for commercial purposes. Please credit the copyright holder when reusing this work.
Held by© Small Island 2004 by Andrea Levy

The genius of the novel, for me, arises in Levy’s assertion of the profound personal and ideological effects of these encounters on the English themselves. This begins with the prologue set in the 1920s when Queenie, then a young child, meets an African man at the Empire Show at Earl’s Court, and is simultaneously shocked and fascinated by his skin colour and his fluency in English. Later, as a landlady, she has a brief and sexually liberating affair with the visiting soldier, Michael Roberts, by whom she falls pregnant, and forms a deep friendship with Gilbert, another war time serviceman. Queenie meets Gilbert when he is stationed near her farm during the war, and he becomes her lodger in London on his return in 1948. The attention to the wartime experiences of Caribbean servicemen stresses their deeply felt colonial allegiance, and draws on the real experiences of Levy’s father and uncle who had signed up to fight for Britain in the war. Levy has said that she wrote Small Island in part to respond to ‘the ignorance about the involvement of West Indian serviceman’, an ignorance that she felt she had shared (see Mullan, 2011). Of the post-war years, the novel’s sustained focus on the issue of housing for Gilbert and his fellow migrants reflects the very real struggles to find accommodation at a time when many landlords would not accept black tenants.

Queenie’s open-mindedness contrasts profoundly with Bernard, who is away fighting and then AWOL during these events, but on returning is horrified by his wife’s fraternisations with black people. Bernard embodies one pervasive attitude of the English at the time, socialised themselves in the discourses of imperialism, seeing the British as a civilising and paternalistic force over their infantile and uncivilised Caribbean subjects – ‘these blasted coloured colonials’ who he has ‘nothing against in their place. But their place isn’t here’ (p. 469).

But even Bernard’s hard-fixed attitudes are shifted when Queenie gives birth to a mixed-race son, who he wants to look after, despite the fact that he isn’t the father and despite his own pervasive racism. Although the child is adopted by Gilbert and Hortense, the novel’s ending, marked by the birth and growing sense of collective action of the Black community, does suggest an inevitable overhaul of Britain’s sense of itself as a mono-cultural nation.

As a child of a Windrush migrant myself, this novel has had enormous personal significance for me. It was the first narrative I encountered that told the story of Caribbean migrants’ struggles and survival in a hostile Britain, and presented that London social milieu in such an evocative and lively way. I could see my own father amongst the characters, and it was reading Small Island and talking to Andrea Levy over a decade ago that prompted me to try to write about his experience of migration across collections of poetry and a family memoir. I’ve carried Levy’s novel with me ever since, like an old handbag, and even re-reading the final pages in order to write this article I again found myself intensely moved by such powerful and important writing.