An introduction to the Caribbean, empire and slavery

After the Caribbean was first colonised by Spain in the 15th century, a system of sugar planting and enslavement evolved. David Lambert explores how this system changed the region, and how enslaved people continued to resist colonial rule.

Along with a number of colonies in North America, the Caribbean formed the heart of England’s first overseas empire. The region was also known as the ‘West Indies’ because when the explorer Christopher Columbus first arrived there in 1492, he believed that he had sailed to the ‘Indies’, as Asia was then known. At the time, Europeans did not realise that this was a completely new part of the world that we now call the Americas. It is also for this reason that people who lived in this part of the world before the Europeans arrived have been called ‘Indians’.

Columbus claimed many of the Caribbean islands for Spain. For much of the 16th century, Spain had things pretty much its own way in the region. From the early 17th century, however, people from other European powers, including France and England, settled in the region too. (Strictly speaking, it is not correct  to talk about ‘Britain’ until after 1707, when England and Scotland formed a union.) The English settled St Kitts in 1624, Barbados, Montserrat and Antigua in 1627 and Nevis in 1628. Around the same time, France established colonies in Martinique and Guadeloupe. In this way, the Caribbean came under the control of a number of competing European countries, joining Spain, which had established its first colonies in the region more than a hundred years before.

A General Chart of the West India Islands, 1796 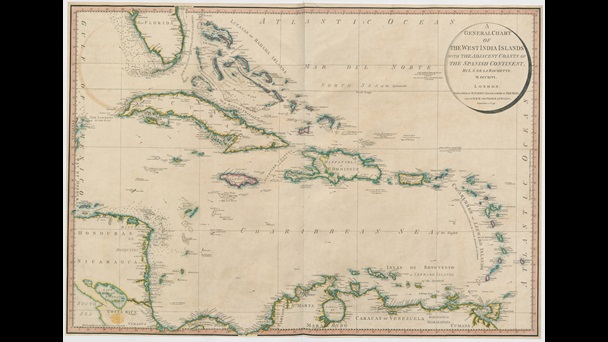 This is a map published in 1796 of the Caribbean region. It is colour-coded to show which European country controlled which colonies. The British colonies have pink around their borders, the French blue and the Spanish yellow.

The Europeans came to the Caribbean in search of wealth. The Spanish had originally looked for gold and silver, but there was little to be found. Instead, the Europeans tried growing different crops to be sold back home. After unsuccessful experiments with growing tobacco, the English colonists tried growing sugarcane in the Caribbean. This was not a local plant, but it grew well after its introduction. Sugarcane could be used to make various products. There was sugar, of course, which went well with tea, coffee and chocolate. It could also be used to make rum, a strong alcoholic drink. A lot of people in Europe wanted such products, and, as a result, those who grew it – known as ‘planters’ – became very wealthy. This also made the Caribbean colonies valuable – and tempting targets for rival empires. Britain and France were constantly at war in the 18th century and early 19th century, with places such as Martinique changing hands many times. 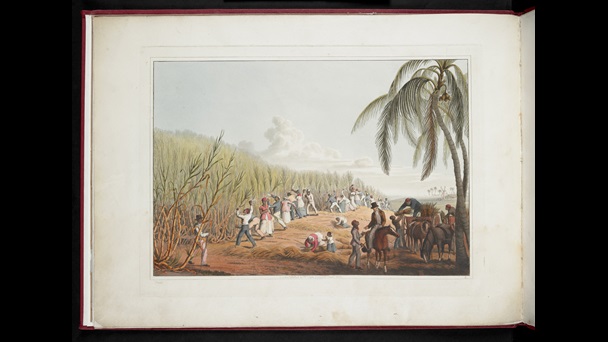 Clark's Ten Views portrays the key steps in the growing, harvesting and processing of sugarcane.

The rise of slavery

The spread of sugar ‘plantations’ in the Caribbean created a great need for workers. The planters increasingly turned to buying enslaved men, women and children who were brought from Africa. Some 5 million enslaved Africans were taken to the Caribbean, almost half of whom were brought to the British Caribbean (2.3 million).

As planters became more reliant on enslaved workers, the populations of the Caribbean colonies changed, so that people born in Africa, or their descendants, came to form the majority. Their harsh and inhumane treatment was justified by the idea that they were part of an inferior ‘race’. Indeed, complicated ways of categorising race emerged in the Caribbean colonies that placed ‘white’ people at the top, ‘black’ people at the bottom and different ‘mixed’ groups in between. Invented by white people, this was a way of trying to excuse the brutality of slavery.

The History, Civil and Commercial, of the West Indies, 1798 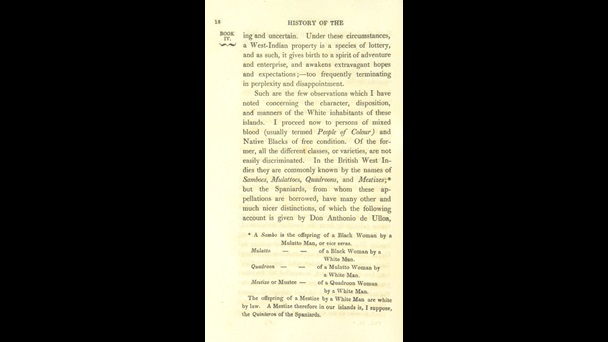 Edwards described of the different groups of people to be found in Caribbean societies.

Emancipation and the fight for freedom

Seeking their freedom and to escape their harsh and brutal treatment, some enslaved people rose up against the planters, though only in the French colony of St Domingue did they manage to end slavery. Others ran away from the plantations, and while many were recaptured, others managed to form communities of ‘Maroons’ who continued to resist European rule. They tended to occupy land far from plantations, in places that were difficult for the colonial forces to reach. In some places, such as Jamaica, the British were unable to defeat the Maroons and had to reach an agreement with them. The British said that they would not attack the Maroons, so long as they brought back any other enslaved people who tried to join them and would help the British if there was a rebellion or invasion. 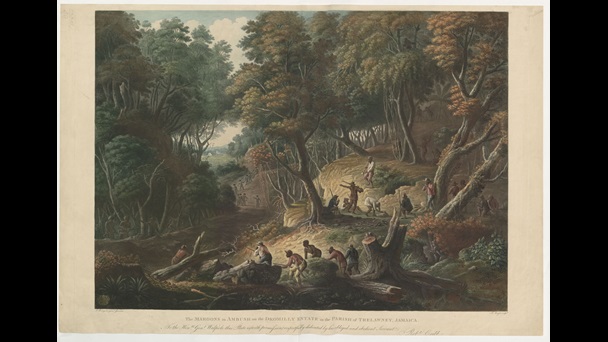 Maroons were formerly enslaved people who had managed to escape slavery and form new communities.

The system of slavery began to be dismantled in the early 19th century. The enslaved people were given their freedom – or ‘emancipated’ – in the British Caribbean in the 1830s. A system called ‘Apprenticeship’ was put in place from 1834 to 1838 across most of the Caribbean; this was intended to provide a transition to freedom for the former enslaved people and the planters who relied on their labour. Even after Apprenticeship was ended, things remained very unequal.

An account of the period of so-called 'apprenticeship', the transition between slavery to freedom 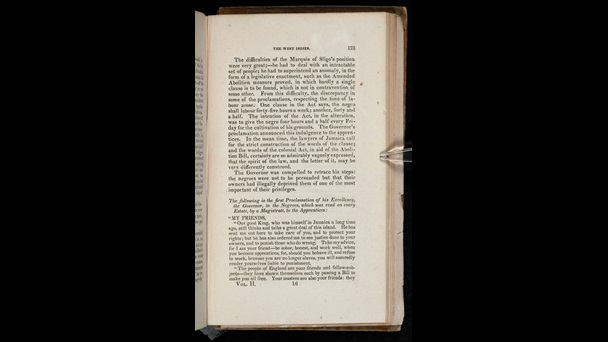 This proclamation set out the terms of 'apprenticeship'. It explains that the former enslaved people would still have to work for their former owners. They could face punishment if they did not.

This article was originally published on the British Library's 'West India Regiments' webspace.

More articles on Waves of history