An introduction to To Sir, With Love

Caryl Phillips introduces To Sir, With Love, E R Braithwaite's autobiographical novel about a Guyanese man who, shortly after the end of the Second World War, finds himself teaching in one of the worst schools in London's East End.

To Sir, With Love (1959) was the first published book of Edward Ricardo Braithwaite, who was born in 1920 in British Guiana (present-day Guyana), the large English-speaking territory on the north-east coast of South America. His was a relatively comfortable upbringing, being the son of two Oxford-educated parents, and as a young man he quickly absorbed the conservative, middle-class manners of the Caribbean intellectual. He attended Queen's College, an elite colonial school in British Guiana, and went on to study at City College in New York, before enlisting as a Royal Air Force pilot in England. As Braithwaite states in To Sir, With Love, like many other Caribbean men, he joined the British armed forces out of a sense of duty, and during the war years he was ready to die for his country.

In the autobiographical To Sir, With Love, Braithwaite remembers being demobilised at the end of the war. He fully expects to be absorbed into the upper levels of his chosen profession of engineering. Not only has he studied in New York, but he will soon earn a Master’s degree in physics from Cambridge University. However, at interview after interview he is refused an appointment because of his colour. Unfortunately, the camaraderie of the armed forces does not transfer to civilian life, and the realisation of this fact strikes him a hard blow:

I had just been brought face to face with something I had either forgotten or completely ignored for more than six exciting years – my black skin … Disappointment and resentment were a solid bitter rising lump inside me; I hurried into the nearest public lavatory and was violently sick. (p. 34) 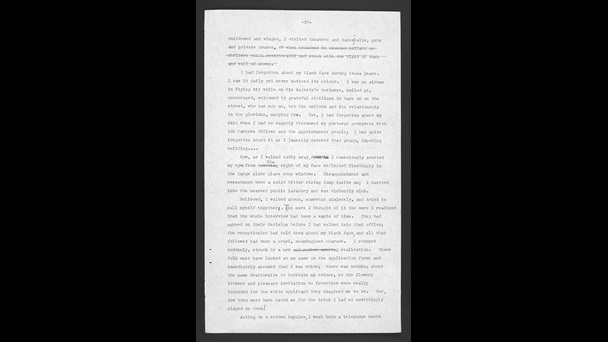 After being demobilized at the end of World War Two, Braithwaite describes his experience of racial discrimination when he is interviewed for a position within an engineer company. From the typescript draft of To Sir, With Love, 1959.

After 18 months of unemployment and faltering confidence, Braithwaite decides to try teaching, for the profession is in desperate need of educated men and women. He successfully negotiates an interview, but then finds himself posted to one of the worst schools in the East End of London. He is further dismayed to discover that his charges are an unruly, disruptive group of 15-year-olds who stand cockily on the threshold of adulthood.

Predictably, the fetid air and the dirty streets of the recently bombed-out East End disappoints, as do the unwashed, uncouth youngsters now ranged before him. We are left in no doubt that Braithwaite’s manners are impeccable, and that his dress is always smart and tidy, but it is also clear that an unmistakable, almost anthropological, sneer is permanently decorating the coloured teacher’s face:

The girl who rose to comply was fair-haired and slim, with a pair of heavy breasts which swung loosely under a thin jumper, evidently innocent of any support. I wondered at the kind of parent who would allow a girl to go out so sloppily attired. (p. 49)

There is, however, no doubt that Braithwaite would, during this period in the late 1940s and early 1950s, have had to endure a fair amount of anthropological sneering himself. This coloured man in London would be a double oddity; first for his colour, and then for his class. Those few West Indians who did occupy the streets of England would, despite the prejudice they endured, have had far more in common with white working-class people than with this Cambridge-educated former RAF officer. In fact, throughout the course of the book there is no sense of ‘Ricky’ having a community of any sort beyond his white ‘mum’ and ‘dad’, and we do feel some sympathy for this somewhat isolated, patrician man who attempts now to make a community out of the pupils in his charge and his fellow teachers in the staffroom.

Braithwaite displays great aptitude as a teacher, but we are aware that there are lessons that he too must learn, particularly with reference to humility and patience. Unsurprisingly, it is the uncouth pupils who soon begin to teach him the lessons. This is poignantly illustrated when the mother of one of the boys – the only mixed-race boy in the class – dies, and the pupils make it clear that although they are prepared to have a collection for a wreath, not one of them is able to deliver it, for to knock on the boy's door might be seen as fraternising with coloureds. ‘Ricky’ is quick to fall into a trough of judgemental despair:

It was a like a disease, and these children whom I loved without caring about their skins or their backgrounds, they were tainted with the hateful virus which attacked their vision, distorting everything that was not white or English.
I remembered a remark of Weston’s: ‘They’re morons, cold as stone, nothing matters to them, nothing.’
I turned and walked out of the classroom sick at heart. (p. 166)

The following day, a still bitter Braithwaite turns up for the funeral:

And then I stopped, feeling suddenly washed clean, whole and alive again. Tears were in my eyes, unashamedly, for there, standing in a close, separate group on the pavement outside Seales’ door was my class, my children, all or nearly all of them, smart and self-conscious in their best clothes. Oh God, forgive me for the hateful thoughts, because I love them, these brutal, disarming bastards, I love them … (p. 169)

Braithwaite also learns to be more tolerant of his fellow teachers, whose attitudes towards him vary from overt hostility to deep love. Navigating the choppy waters of the staffroom presents Braithwaite with almost as many problems as trying to control the pupils in the classroom, but eventually he succeeds in creating a place for himself in the school, and by the end of the book ‘Sir’ is both respected and loved by pupils and teachers alike.

Fifty years on, To Sir, With Love can be read as a narrative of triumph over adversity concerning one highly unusual man’s eight-month experience of an inner-city school that enables him to grow, and occasions some of the people he comes into contact with to put their prejudices on hold. But clearly it is more than this. The author is keen for us to understand that the Ricky Braithwaites of this world can not, by themselves, uproot prejudice, but they can point to its existence. And this, after all, is the beginning of change; one must first identity the location of the problem before one can set about addressing it. 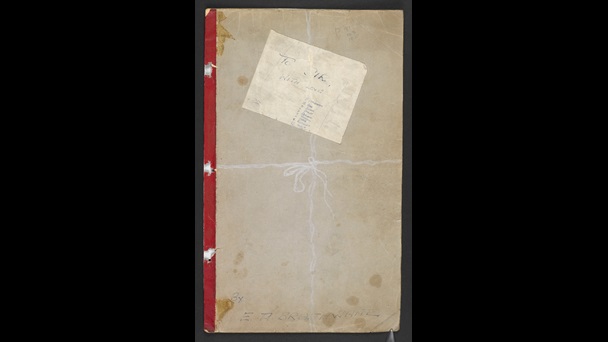 This original typescript draft of E R Braithwaite’s To Sir, With Love was sent to the publishers, The Bodley Head. The novel became a bestseller when published in 1959.

After the publication of To Sir, With Love, E R Braithwaite left teaching and pursued a successful career as a social worker and then a diplomat. Reading this book it is easy to discern how well suited he was to both careers. He also continued to produce books, including a memoir about his time as a social worker, Paid Servant (1962), and another about his time in South Africa, Honorary White (1975). However, partly because of the success of the filmed version of the book, To Sir, With Love remains his best-known work. This fine and genuinely touching portrait of a post-war English working-class community coming face to face with a decidedly atypical West Indian man, has much to tell us about race, class and the education system in Britain. It also speaks eloquently to the individual courage of a Cambridge-educated West Indian who is prepared to share with us his own prejudices and fears as he trips cautiously across the rubble of the East End of London in those bleak, austere years following the end of the Second World War.

All page references are to: E. R. Braithwaite, To Sir With Love (London: Vintage, 2005)

More articles on The arrivants