Postwar migration to Britain from Africa and the Caribbean led to the development of black British theatre in the 1950s. Natasha Bonnelame introduces several of the most important black playwrights of the period, including Errol John and Wole Soyinka and describes the contexts in which their plays were staged.

As the government attempted to reconstruct the British economy after the end of World War Two, the late 1940s ushered in a new wave of migration to the UK. Appeals for workers were aimed primarily at white Europeans and those who arrived in Britain were mostly soldiers, displaced persons and former prisoners of war from Eastern Europe and Germany. In 1948 the Nationality Act, which granted all Commonwealth subjects citizenship rights in the UK, further changed the dynamics of Britain’s population.[1] Large-scale migration from Africa, the Caribbean and the Indian subcontinent saw the development of new communities across the UK which contributed to declining sectors such as mining, textiles and transport. Soon, these communities would demand a space for their stories and experiences on the British stage and beyond.

Over the next decade, a growing community of black theatre practitioners emerged in Britain. The late 1950s is a seminal moment in the development of black British theatre in the UK, with the Royal Court in Sloane Square playing a significant role in the establishment of this wave of new writing. Three playwrights in particular – Errol John, Barry Reckord and Wole Soyinka – standout for their achievements at the Royal Court, and for the position they would come to occupy in the canon of black British theatre.

To the moon and back

At the end of 1956, Kenneth Tynan, drama critic of The Observer and his editor, David Astor, announced a new playwriting competition. The winning entries would receive prize money and the chance for their plays to be staged in a commercial theatre. Tynan and Astor had expected at most five hundred plays, but the paper received nearly two thousand entries. First prize was awarded to Trinidadian writer and actor Errol John.[2] Born in 1924 in the capital Port of Spain, John’s three act play is set during the late 1940s in a tenement yard in the East Dry River District, an area known for its poverty and violence.[3] During World War Two American army and naval personnel established bases on the island, thereby disrupting British colonial rule. It is this tension, between contemporary and historical conflict and occupation, which informs Moon on a Rainbow Shawl.

The production of John’s play was fraught with problems. The lead roles of Ephraim, Sophia and Charlie were awarded to African American actors as it was assumed that black British actors lacked the necessary experience and stature. The management at the Apollo Theatre in the West End, where the play was to be staged, did not meet with the cast at their first rehearsal, and in the end the play was deemed unsuitable for a West End audience. The Royal Court was suggested as an alternative venue, and on 5 December 1958 Moon on a Rainbow Shawl opened at the Court and ran for six weeks. The problems that arose during the production of John’s play – namely the difficulties faced by a black playwright and black British actors to gain respect and recognition for their work – would continue long into the rest of the 20th century.

Photograph from a 2012 production of Moon on a Rainbow Shawl 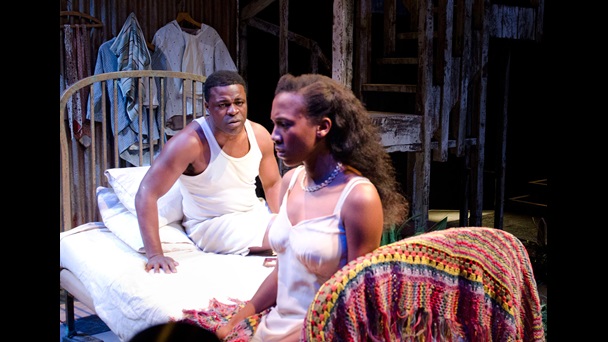 Ephraim and Rosa with the rainbow shawl.

Wole Soyinka and the Ijinle Players

In 1957 Wole Soyinka, who would later become the first African to win the Nobel Prize for Literature, was attending Leeds University, studying for his MA. He journeyed to London and landed at the Royal Court where he became a script-reader and member of the Writer’s Group, and started to write plays and act in sketches.

Between 1957 and 1975 the Royal Court staged the ‘Sunday night productions without decor’, a series of rehearsed plays with minimal scenery and costumes which were held over one or two nights. George Devine established these productions to give a platform to new, emerging playwrights. Soyinka’s first one-act play, The Invention, had its premiere as part of the Sunday night series in November 1959. Nigerian-born Soyinka is known for his satiric depiction of the country’s political and sociocultural traditions and institutions, but The Invention, a science fiction satire, is an attack on racism, and more specifically on South Africa’s then policy of apartheid.

Soyinka returned to Nigeria in 1960 as the country moved towards independence from Britain. There he taught and authored over ten plays, before his second play at the Royal Court was produced in 1966. By 1965 the Court was under the directorship of William Gaskill, who greatly admired Soyinka and would play an important role in this early stage of his career. The Lion and the Jewel, directed by Desmond O’Donovan and designed by Jocelyn Herbert, was presented by the Ijinle Players, a group of African actors. One of Soyinka’s most celebrated works, it is a comedy set in a Nigerian village – but beneath the song and dance Soyinka reveals a dark centre. Sidi, a young woman considered the village ‘jewel’, is raped by Baroka, the old, patriarchal ‘lion’. Written in 1963 at the point when the Nigerian Republic was establishing itself, The Lion and the Jewel reveals the tensions between tradition and modernity, between Africa and Europe, and warns against the corrosive and corruptive nature of power.

Photograph of a production of The Lion and the Jewel, 2005 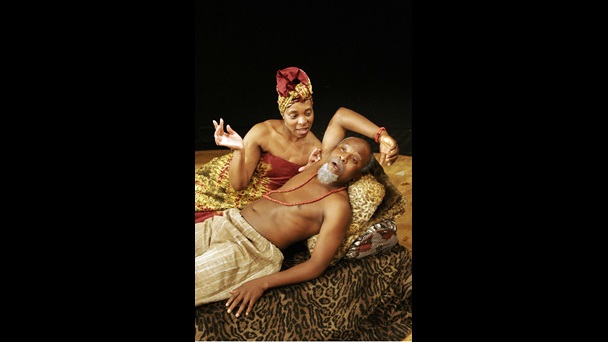 Photograph of Flesh to a Tiger by Barry Reckord (1958 premiere) 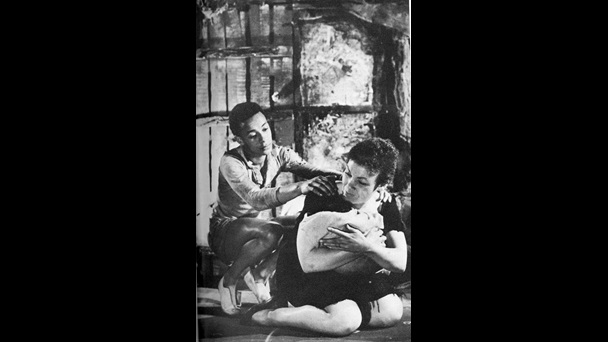 Tamba Allen and Cleo Laine in the 1958 production of Flesh to a Tiger.

Born in Jamaica, Reckord won the prestigious ISSA scholarship in 1950, which enabled him to study English at Emmanuel College, Cambridge. After obtaining his degree he returned to Jamaica in 1953 to pursue a career in theatre, working alongside his brother, the actor and director Lloyd Reckord, who had studied at Bristol’s Old Vic Theatre. The Reckord brothers, however, felt that the Jamaican theatre scene of the time did not allow for the expansion of their work and they returned to England in 1958.

Reckord’s second play at the Court, You in Your Small Corner (1961; directed by John Bird), explored the Caribbean migrant experience from the perspective of the lives of a group of wealthy West Indians living in Brixton. The play was adapted in 1962 for ITV’s Play of the Week series, and its subject matter – namely the sexual relationship between an educated young black man and an uneducated young white woman – caused a significant amount of controversy when it was aired.

Reckord had taught in Jamaica, Canada and London, and drew on his experiences and observations for his third play at the Court, Skyvers (1963), set in a secondary modern school in south London. Directed by Ann Jellicoe and designed by Jocelyn Herbert, the production featured an all-white cast, including iconic 1960s actor David Hemmings in the lead role. The play examines the rage, alienation and fears of five south London boys as they prepare to leave school and enter into adulthood. Skyvers’ protagonist, Cragge, brings to light the hypocrisy of an educational system that declares its desire to create a meritocratic society, while reinforcing hierarchical values which favour privilege for the few, at the expense of the masses.

Photograph of Skyvers by Barry Reckord (1968 revival at Nottingham Playhouse) 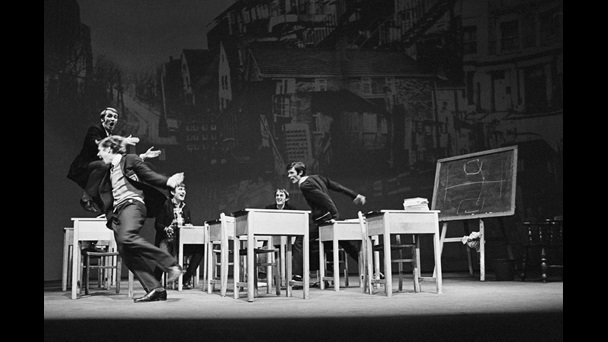 Michael Keating as Brook (centre) and James O'Brien as Cragge.

Where are the women?

During the late 1950s and 1960s black female playwrights were virtually invisible on the British stage.[4] While their works were not being published or produced, a number of black women established crucial networks during the post-war years. Trinidadian-born Pearl Connor-Mogotsi studied law at King’s College London, and in 1956 established the Edric Connor Agency with her husband. Connor was one of the first black women to campaign for better pay for black actors, Equity membership and recognition for black actors, dancers, writers and musicians when existing agencies refused to acknowledge their work.[5]

In 1963 the Connors established the Negro Theatre Workshop and produced Wole Soyinka’s The Road (1965) and The Dark Disciples (1966), which represented Britain at the first World Festival of Negro Arts in Dakar, Senegal. A blues version of the St Luke Passion (a choral and orchestral work by the Polish composer Krzysztof Penderecki), The Dark Disciples was also produced for BBC television. Featuring a company of 25 actors, it aired on Palm Sunday in April 1966. The Negro Theatre Workshop would also play a significant role in the development of black British and Caribbean film, co-producing and distributing titles such as Edric Connor’s Carnival Fantastique (1960), Trevor Rhone’s Smile Orange and Horace Ove’s Pressure (1976).

Mustapha Matura, born in Trinidad, traveled to the UK in 1956 at the age of 21. With a keen interest in American, French and Italian cinema, Matura was also drawn to the theatre, and in particular what he has termed ‘the radical theatre of the Royal Court’,where he watched The Death of Bessie Smith (1961–62) by Edward Albee and Luther (1961) by John Osborne.[6] During a visit to Rome he worked on a production of Langston Hughes’s Shakespeare in Harlem, and became inspired and determined to write plays that examined the experiences of Caribbean communities both in the Caribbean and the UK. 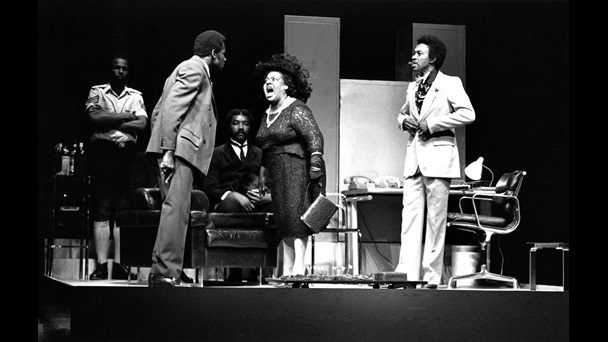 The opening night of Play Mas at the Royal Court.

On his return to England, surrounded by creatives such as film-maker Horace Ove and actor Stefan Kalipha, Matura began to write. In 1970, Ed Berman (founder of the Ambiance Lunch-Hour Theatre Club, which supported writing by black, women and gay writers) and director Roland Rees included Matura’s Black Pieces in their Black and White Power Plays Season at the Institute of Contemporary Arts (ICA). Black Pieces comprised four short ‘pieces’: Dialogue, Indian, My Enemy and Party. Matura was influenced by the conversations taking place among his friends and peers concerning the Black Power Movement in America and an emerging black consciousness in the UK. Migrants from the African diaspora often found that they were caught between trying to establish their individual identity while also having to represent an entire community. Black Pieces reflected these political and often contradictory positions. The play marked the beginning of a long and successful career that would see Matura write for theatre and television, and co-found the Black Theatre Co-operative with director Charlie Hanson in an attempt to address the lack of opportunities for black theatre practitioners.

These examples of early black theatre practitioners working in post-war Britain have a twofold importance. They paved the way for the arrival of a number of black writers and theatre companies, but they were also instrumental in creating the beginnings of an artistic language for the newly emerging black British community.

Explore the contributions of African, Caribbean and black British playwrights to British theatre with the National Theatre’s Black Plays Archive, an online catalogue for the first professional production of every African, Caribbean and black British play produced in the UK. Initiated by playwright Kwame Kwei-Armah, the archive features audio play extracts, video interviews with playwrights and theatre practitioners, and essays.

[3] Shelley Cole-Nimblett, The Significance of ‘Moon on a Rainbow Shawl’ in Caribbean Literature (Storytelling Forum, 2011).