The Black Jacobins, by Trinidadian historian C L R James, tells the story of the Haitian Revolution. Director Yvonne Brewster recalls how her groundbreaking production of the play in 1986 contributed to the development of black British theatre.

In 1936 Toussaint Louverture, a play by the Trinidadian historian C L R James, was given a single performance in London starring Paul Robeson as Toussaint. I had first heard about the play as a schoolgirl in Jamaica in the 1950s – but we did not have the chance to read it, as the play was never printed. In 1967 a new play on the same theme, now titled The Black Jacobins, was performed in Nigeria at the University of Ibadan. In 1976, this later play appeared in an anthology edited by Errol Hill (A Time and a Season – Eight Caribbean Plays). Fascinated, I often imagined seeing it on stage in a production with black British actors of distinction. I was determined to produce it. After all, this was about the ‘energy of a people trying to be born’, as we as Caribbean citizens abroad appreciate only too well. Also, I wondered about it, possibly, as a sort of clarion call for people no longer inclined to revolution.

Typescript of The Black Jacobins by C L R James 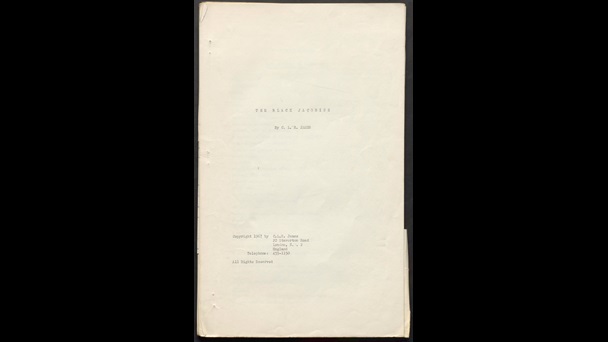 This is a draft typescript of The Black Jacobins, C L R James’s 1967 play about the Haitian Revolution.

Usage terms Copyright © Estate of CLR James, reproduced courtesy of the Curtis Brown Group. You may not use the material for commercial purposes. Please credit the copyright holder when reusing this work.

Finally, one decade later, my opportunity to stage the play arrived. For two years in 1982–84 I had been a drama officer at the Arts Council of Great Britain. When I re-entered the real world I once again took up my freelance directing, working for the Tricycle Theatre, Theatre Royal Stratford East, the Half Moon Theatre and the Cambridge Theatre Company, among others. This all changed in 1985. That year, when the abolition of the Greater London Council (GLC) by Margaret Thatcher’s government was a certainty, I received a phone call suggesting I submit, virtually immediately, a fully costed proposal for a theatrical production. I was told that there might be funding available for the staging of something ‘impressive’ from the black community. Having been convinced that this proposal was not a hoax, there was no difficulty identifying the The Black Jacobins: Toussaint Louverture and the San Domingo Revolution as the ultimate choice. My preliminary blue-sky budget for this production – which would require a minimum of 23 actors, a first-rate set design, lighting, sound and costume designers, excellent stage managers, innumerable 18th-century military costumes, a full six weeks rehearsal in decent rehearsal rooms and the rental of a splendid venue – topped the £80,000 mark. Even today, this is an enormous sum for an independent black production in England: an impossible dream. The money was, surprisingly, granted in full with no quibbles. Quickly, I had to form a theatre company. With Mona Hammond, Inigo Espegel and Carmen Munroe, Talawa Theatre Company was born.

Programme for The Black Jacobins by C L R James, 1986 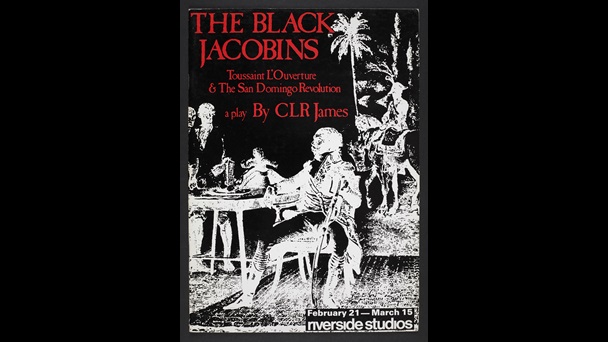 Talawa Theatre Company’s production of C L R James’s play The Black Jacobins (1967) was performed in 1986 at the Riverside Studios in London. Directed by Yvonne Brewster, it was the first play to be staged by the newly formed Black-led theatre company.

Usage terms © Talawa Theatre Company. Photographs by Rob Aberman. Published under a Creative Commons Non-Commercial Licence. © Riverside Studios. Except as otherwise permitted by your national copyright laws this material may not be copied or distributed further.

However, there was one small problem: I did not have the rights to produce the play. I persuaded Darcus Howe to introduce me to C L R James, his uncle. Although C L R James eventually put this right, he couldn’t immediately compute the situation: here was this woman, with all this money to spend, wanting to put his play on stage after half a century, only now, at the eleventh hour, seeking his permission… Eventually he chuckled, making the point that usually people came along with great, lofty production ideas, but no money.

Before giving his permission for the production, I had to survive many visits to Brixton in which his searching questions – both literary and political – prevailed. For instance, my initial misreading of the role of Dessalines irritated him: in my simplicity I saw him as an archetypal dictator figure, but of course he was a separatist! ‘Woman, the next thing you will say is your hero is Idi Amin!’, cried C L R. Toussaint was the natural hero, the high-minded leader – of those who could understand him (C L R was always at pains to stress that Toussaint was intellectually more advanced than most, and that the people sometimes failed to grasp the more sophisticated elements of his political position). Jean-Jacques Dessalines was one of the leaders of the Saint-Domingue (Haitian) Revolution of 1791–1804. He was instrumental in the founding of independent Haiti and was its first ruler.

Permission for every change in the dialogue and in the order of scenes had to be, quite properly, discussed and secured between C L R and myself. It seemed to me that although the play was stirring politically on the page, a theatrical vehicle needs more than rhetoric, more than long, often over-written speeches.

And again, there were a number of places where I wanted to bring the text alive by the addition of appropriate sound, song and movement. I wanted to avoid a too-obvious history lesson.

I had to make a watertight case in defence of keeping the scenes with Mme Bullet. One of my contentions was that there are two love stories in the text: Dessalines and Jeanne Marie, and Toussaint and Louise Bullet. These, I felt, provided a more emotionally rounded play. Every point had to be argued through, but C L R was gracious once he saw the point.

In the United Kingdom at that time black British people were not expected to produce this size of show, especially those with little or no track record in the country. From the outset, however, the gods smiled on this endeavour. Norman Beaton, the leading black British actor of the time, was the first to sign up to play the principal role of Toussaint. I then became ambitious in the casting of other roles, securing Mona Hammond, Gary MacDonald, Trevor Laird, Jenny Jules and Brian Bovell, to mention but a few of the 23-strong cast. Before the play opened Norman Beaton reminded the cast that they were ‘expected to fail. But we won’t’. Toussaint L’Ouverture was the leader of the Haitian Revolution of 1791–1804, subject of C L R James’s classic history book The Black Jacobins (1938).

Usage terms Copyright © Estate of CLR James, reproduced courtesy of the Curtis Brown Group. You may not use the material for commercial purposes. Please credit the copyright holder when reusing this work.

Set designer Andy (Andrea) Montag used the entire 72 feet of the enormous Riverside stage: we stripped back all the old black cloth and revealed the brick-work and the marvellous arches, from which were suspended enormous flags of France, Spain and Great Britain, celebrated by Richard Moffat’s lighting. On the floor was a representation of the Goddess Erzulie, which Jamaican choreographer Tommy Pinnock (from the Alvin Ailey Company in America) used, to terrifying effect, in the voodoo scenes. Mark Borkowski, then a brilliant young marketing prodigy, somehow got us featured in every important newspaper and periodical. The impressive poster was very commanding. Now a collector’s item, it used an old 18th-century print of Toussaint seated in full military regalia, which was loaned to us by the Haitian Ambassador M Duval. The result was sold-out houses (before opening night) and eager expectation. After each performance heated discussion late into the night took place in the foyer. Even in the face of mostly lukewarm, condescending critical responses, the people came. The audience was pretty wide-ranging: partly academic, one or two celebrities, but also ordinary people, who wanted to come and see their revolution on the stage. There were even touts on the dark roads that led to Riverside Studios offering tickets at highly inflated prices… a nasty practice, but sweet music to our ears!

The success of this production of The Black Jacobins, presented by the hastily formed Talawa Theatre Company, was unexpected. There was, it appeared, some audience, some need for productions of quality which dealt with the black experience. Together with the annual Black Theatre Season of plays (also supported by the GLC) and the many black theatre companies in operation in the 1980s, we had no difficulty in planning the second Talawa production of a challenging play: Echo in the Bone by Denis Scott. We had money in the bank and the future was bright. From these beginnings in 1985 when the first grant was given, the company has overcome the trials and tribulations of minority representation, kept its focus and flourishes still today. No mean feat.