Get Up! Stand Up!

With a focus on the struggles for Black communities in Britain from the 1960s to the 1980s, Colin Prescod speaks on anti-racist activism and concludes by asking us to evaluate 'our now'.

An address to the Huntley Archives conference ‘Get Up! Stand Up!’ in 2011, which centred on struggles for Black communities in Britain, waged over three decades, from the 1960s to the 1980s. The Huntley Archives were the first major deposit of records from the African Caribbean community in London presented to London Metropolitan Archives (LMA).

For Caribbeans in particular, these local UK struggles were at first part and parcel of a broader politics of liberation and freedom – anti-colonialist and anti-imperialist, and therefore anti-racist. The campaign slogans of the time were militant. And that militancy inflected our poetry and song. ‘Get up, stand up!’ urged poet-musician Peter Tosh. The mood was insurrectionary. The most radical of us aspired to establish our own non-exploitative, non-capitalist, democratic ‘bespoke’ socialisms, back home. Cuba’s was a very Caribbean revolution.

The Groundings with My Brothers by Walter Rodney In this collection of public lectures given in Jamaica, Guyanese-born scholar and activist Walter Rodney calls for the development of an anti-colonial Marxist Black Power movement in the Caribbean.

Usage terms You may not use the material for commercial purposes. Please credit the copyright holder when reusing this work.
Held by© Artwork for cover design of 'The Groundings with my Brothers' by Walter Rodney: © Errol Lloyd

Eventually, as migrants began to put down roots in the UK, there was a turn to ‘here to stay, here to fight’ struggles. For a relatively brief moment, maybe a decade and a half, alongside other migrant-settlers with colonial pasts – from the Indian sub-continent and from continental Africa – we forged the idea of ‘Black’ not as a label for skin colour but as a political colour: the colour of resistance to all race and class injustices.

Letter from Vincent Reid to Andrew Salkey discussing the Black Power Movement in the UK, 21 August 1968 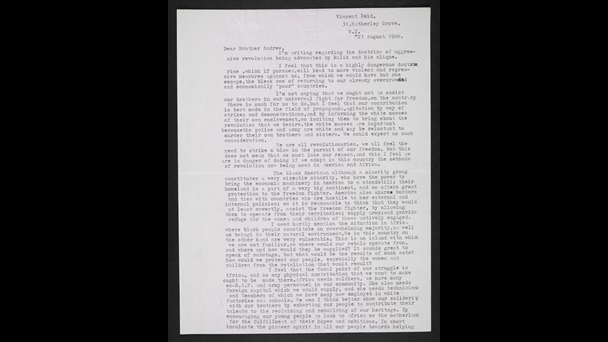 At 13, Vincent Reid was the youngest migrant on board the Empire Windrush in 1948. Here, Reid advocates for Black people to unite to build a stronger Africa, a core aim of Afrocentric movements that developed in the early 1960s.

Usage terms You may not use the material for commercial purposes. Please credit the copyright holder when reusing this work.
Held by© Vincent Reid

We fought back against insults and physical attacks in public places, as well as against being reduced, in effect, to a second-class citizenship. These struggles were about belonging – about the right to have full and fair access to citizens’ rights, and about the conditions on which we were prepared to belong. We were going to have to change this place, if we were to live here in a dignified way. And given that the existing systems and institutions were not geared to the kind of liberation we aspired to, a further tenet of these early campaign struggles was the centrality of ‘self-help’ strategies.

Wha ‘appen Sista, a zine by the Daughters of Harriet Tubman 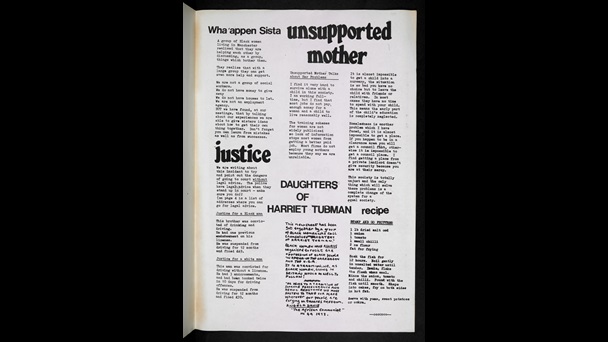 The Daughters of Harriet Tubman, a collective of Black feminists based in Manchester during the 1970s, were focussed on raising consciousness among Black women about the causes of, and solutions to, the oppression they faced.

We demonstrated and protested loudly about inequalities in schooling, housing, healthcare, law enforcement, and policing – and at the very same time, we set up our own community supplementary schools and social and legal advice centres. We objected to political disenfranchisement and exclusion – and at the same time we formed our own political organisations and campaigns, some liberal, some revolutionary. We railed against the whiting out of our part of the story, in relation to the official versions of British history – and at the same time, by religious as well as secular routes, we set up any number of organisations and events devoted to de-colonising our minds. We raged about ill-informed media reporting, as well as about the absence of properly researched literature on the Black experience, contemporary and historical – and at the same time we encouraged scholarship and new writing by and about Black experience, and we established newspapers and magazines, as well as publishing houses and specialist book-shops. Of all these things the Huntley Archives speak volumes – because Jessica and Eric Huntley were initiators and participants on the frontline of the entire spread of these campaigns. 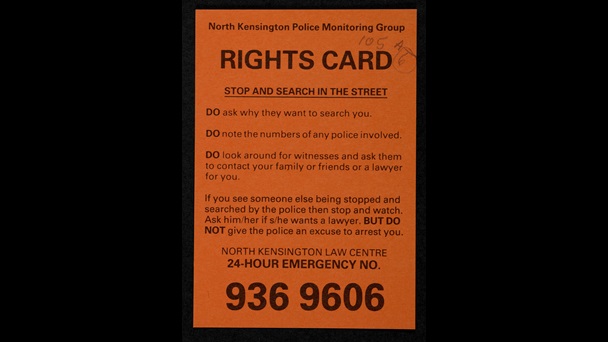 Usage terms You may not use the material for commercial purposes. Please credit the copyright holder when reusing this work.
Held by© Mike Braybrook Archive

New Cross Massacre poster, calling for a day of action 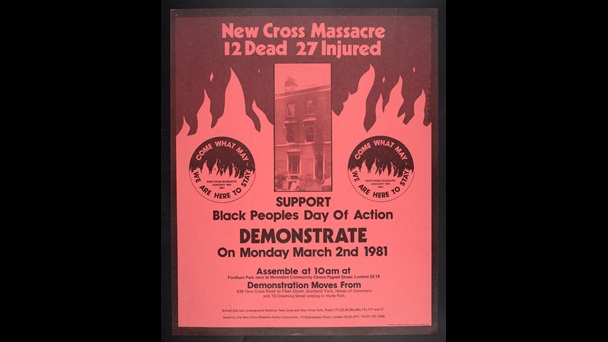 On 18 January 1981 a fire at a teenager’s birthday party in New Cross, south London led to the death of 13 young Black people. The New Cross Massacre Action Committee produced this poster (though it was never shown as the death toll rose to 13) and organised the Black People’s Day of Action, the largest ever demonstration by Black people in Britain.

Usage terms You may not use the material for commercial purposes. Please credit the copyright holder when reusing this work.
Held by© George Padmore Institute

Back then, campaign struggles supported resistance and nurtured rebellion. This was the burden of our tradition – from invasion and capture, to transportation, to plantation enslavement and indenture, to colony, and now to migration and settlement in Britain. The full weight of all this history culminated in explosive street rebellions, peppering the period from the mid 1970s to the early 1980s. The summer of 1981 marked the apogee – when there were riots, simultaneously, in more than 30 UK towns and cities.

The Enemy Within: statements by black people on the state of race relations in Britain pamphlet 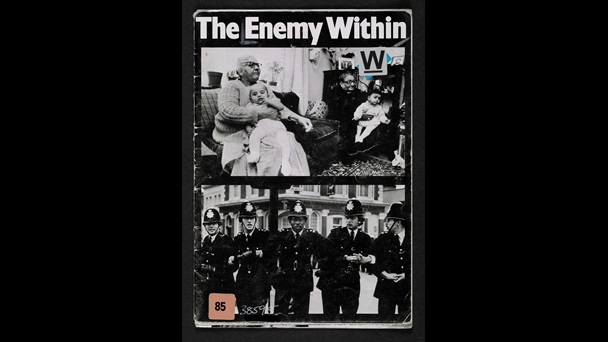 In 1981 the government abolished the 1948 definition of British citizenship through the passage of the British Nationality Act. The Enemy Within was published in response to the rise of deportations and racial violence in the wake of the Nationality Act.

Usage terms You may not use the material for commercial purposes. Please credit the copyright holder when reusing this work.

The establishment cracked. We were offered anti-racist and equal opportunities legislation, of a sort. Some of us were even recruited to join the untransformed mainstream. We also witnessed a multitude of multi-culturist and diversity policy initiatives.

And yet, in October 2010, some three decades after that summer of 1981, the state’s very own Equality and Human Rights Commission report revealed the facts that today in the UK proportionately more young Black men are incarcerated than in the USA; that Black youth (2–3% of the population) are 15 times more likely to be stopped and searched than their white counterparts; and that Black Caribbean and Pakistani babies are twice as likely as white babies to die in their first year. This is devastating evidence of the persistence of race and class discrimination, aggravated now by a rampant ‘Islamophobia’.

Manuscript of 'What Stephen Lawrence Has Taught Us' by Benjamin Zephaniah 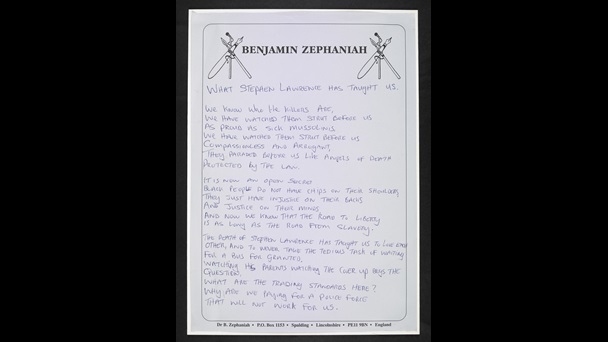 This is Benjamin Zephaniah’s poem about the racist murder of teenager Stephen Lawrence in 1993. When written in 1999, the identity of the killers was regarded as an ‘open secret’ though no convictions had been made due to police failings.

Usage terms You may not use the material for commercial purposes. Please credit the copyright holder when reusing this work.
Held by© Benjamin Zephaniah 1999

Back in the day, we resisted imaginatively and rebelled courageously to some effect, but we did not make a revolution. We won significant anti-racist battles, but we did not win the war against racism.

This conference is asking a question of our ‘now’. We need to do more than just reminisce about some glorious past age.