Perspectives on the Windrush generation scandal: an account by Amelia Gentleman

Amelia Gentleman highlights the experiences of some of the people who have been affected by the Windrush generation scandal, discusses the role of journalism in demonstrating the scale of the problem, and reports on the government’s response.

In October 2017 I received an email from an immigration charity in Wolverhampton with the disturbing subject line: ‘Urgent – Imminent deportation of a lady who has been in the UK for 49 years’. The email explained that Paulette Wilson, a 61-year-old grandmother who had arrived in the UK from Jamaica at the age of ten in 1968, had been wrongly classified as an illegal immigrant and detained in the notorious immigration detention centre, Yarl's Wood, ahead of removal to Jamaica – a country where she had no surviving relatives and which she had not visited for almost half a century.

It was clear from the email (sent by the Refugee and Migrant Centre in Wolverhampton) that the Home Office had made a terrible mistake in handling her case. Within hours of the email being sent Paulette was driven in a prison van to another detention centre near Heathrow Airport, and she would have been deported if the charity's lawyers and her MP had not stepped in to make a last-minute intervention.

I went to visit her soon after her release at her daughter Natalie Barnes's flat. She was devastated by what had happened, unable to understand why she had been categorised as an illegal immigrant when she had attended primary and secondary school in Britain, worked and paid taxes for around 34 years and had brought up her daughter and granddaughter here, both of whom are British. For a while she worked in the House of Commons canteen, serving meals to MPs and parliamentary staff. ‘I don't feel British. I am British’, she told me.

The caseworker who was helping her to untangle her situation said he suspected that she had been caught by newly tightened Home Office regulations, introduced by Theresa May when she was Home Secretary, designed to make it harder for migrants to exist in the UK without documentary proof of their right to live here (‘The aim is to create here in Britain a really hostile environment for illegal migration’, May said in 2012). Paulette had never applied for a passport, and was unable to prove that she had lived in the UK continuously since before 1 January 1973 (the crucial date before which, under the 1971 Immigration Act, everyone who was living in the UK had the right to citizenship). As a result she found herself catastrophically caught up in new policies intended to make life complicated for illegal immigrants.

Demonstrating the scale of the problem

The day after The Guardian published her story, I was called by a man who said his father, Anthony Bryan, 60, was in an almost identical predicament. I went to meet him in north London, and heard that he had spent five weeks in immigration detention centres, and that a ticket had been bought by the Home Office for his return to Jamaica, a country he had left at the age of eight and not visited since. Anthony was also surprised and furious to find himself classified as an illegal immigrant, after a lifetime working and paying taxes in the UK. When he told me that he had three or four friends from primary school fighting similar problems, I began to realise that the Home Office was treating a whole generation of Caribbean-born, long-term UK residents with similar brutality. Those of the so-called ‘Windrush generation’ had migrated to the UK legally, many of them travelling as children to join their parents. Anthony's MP, Kate Osamor, said that she thought these cases were just ‘the tip of the iceberg’ and described the situation as barbaric.

But initially it was very hard to demonstrate the scale of the problem. At a time when immigration is one of the most incendiary topics around, some of the people I spoke to were reluctant to have their problems highlighted in a national newspaper. It is a lot to ask someone who is already in trouble with the Home Office to agree to have their picture printed, beneath a headline that indicates they've been designated as an illegal immigrant – so many people were understandably cautious. Because legal aid was cancelled for immigration issues in 2012 (at the same time that the Conservative government began to devise a whole package of policies designed to create an environment hostile to immigration) many of those affected had nowhere to turn to for help. Local law centres had seen their funding radically cut. MPs were beginning to see cases pop up in their constituency caseloads, but most were puzzled by the phenomenon and often unable to help.

It was only slowly, over the course of six months’ worth of articles in The Guardian, that a clear picture began to emerge of a national problem. We published stories of people who had lost their jobs, been made homeless, and who had been prevented from traveling to visit dying parents in the Caribbean because they were unable to get passports. Guardian readers were particularly disturbed by the case of Sylvester Marshall (whom we initially called Albert Thompson, at his request, while his Home Office case was ongoing), who had been made homeless as a result of the local authority requesting proof that he was eligible for services, and who was refused free cancer treatment on the NHS because hospital staff believed he was an illegal immigrant. He had arrived in the UK as a teenager in 1973, to join his mother who was working as a nurse here; he had worked and paid taxes all his life, so he was devastated to be told he needed to pay £54,000 for radiotherapy for his cancer treatment. Since he had been told that he was not allowed to work and was not eligible for benefits, he was living in a hostel for homeless people. Naturally he had no money to pay for the treatment, and he was acutely worried about the progression of his illness. His case was taken up by Labour leader Jeremy Corbyn in March at Prime Minister's Question Time. Theresa May said that she was not aware of the problem.

There was no government response to the growing scandal until the Commonwealth Heads of Government Meeting arrived in London on 16 April. The Caribbean governments had requested a meeting to discuss the problem with the British Prime Minister but had been told that there was no time in her schedule. That refusal triggered widespread outrage. The Guardian put that story on the front page, and within hours the Home Secretary Amber Rudd came to the House of Commons to make an unprecedented apology for the ‘appalling’ actions of her own department, acknowledging that the Home Office had ‘lost sight of individuals’ and become ‘too concerned with policy’. Theresa May was forced to apologise for the same issue three times that week. Within a fortnight Rudd had resigned.

Five months later, the government's Windrush Taskforce is handling around 8,000 possible cases. Over 2,000 people have been issued with temporary biometric residency cards, proving that they have the right to live here, and 2,121 people have been granted citizenship. Some have been able to travel back to the Caribbean to see relatives they have not seen for decades, others have been given the jobs back they lost years ago when the government classified them as illegal immigrants. The government has suspended some of its hostile environment measures, rebranded the whole policy as ‘compliant’ rather than hostile, and promised compensation to everyone affected. The new Home Secretary Sajid Javid has admitted that something went ‘massively’ wrong in the Home Office and promised that he wants to introduce a ‘fairer, more compassionate immigration system’.

But the anger of those caught up by the Windrush scandal remains potent. In September the government said that not everyone affected would be granted citizenship. Several of those affected have died in difficult circumstances before being allocated compensation; Sarah O'Connor, who was pushed towards bankruptcy because of these problems, died in September, facing eviction from her home. Trevor Johnson, 57, a widower who had difficulty feeding his two teenage daughters when he lost his right to work and benefits, after 45 years in London, is still traumatised by a phone call he had 18 months ago warning him that Home Office staff would be coming to collect him from his home, ahead of deportation to Jamaica. ‘I feel even more angry now the full extent of it has come out. I loved living here, but I've lost faith in this country’. 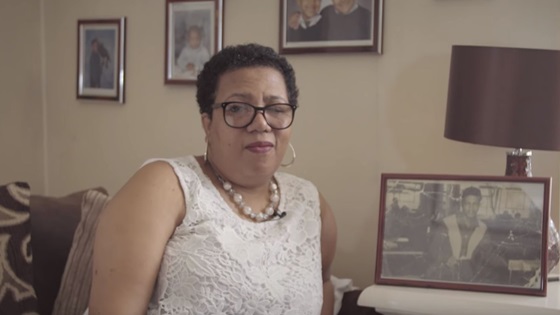 This video was first published by The Guardian on 27 April 2018. It features Sarah O'Connor, who died in September 2018.

Read an interview with Judy Griffith

Read a response from David Lammy