Quite understandably, music is the most widely-accessed manifestation of the black presence in the UK – unless you worked really hard at it, it would be so much easier to avoid black people than to hide from black music. Maybe it’s because of such casual and widespread accessibility that one of the most significant aspects of British black music tends to get overlooked: it’s a commercial success story of astonishing proportions. If Eddy Grant or Jazzie B or Skepta had got to where they are making machine parts instead of music they’d be fêted as titans of industry, and that’s before you consider how these achievements happened in spite of rather than because of the mainstream music business.

Since the early years of the 20th century, when different musical flavours from across the Commonwealth came together in London bands to forge a unique take on jazz, the UK has been a world centre for black music invention. However, as the 1940s rolled into the 1950s – the Windrush years – along with the huge influx of Commonwealth immigrants to the UK, sound systems arrived from Jamaica.

Originating in Kingston in the late 1940s, sound systems were large, powerful and sonically superb PA-type rigs, purpose built to play records as a downtown dancehall alternative to costly live orchestras. Sound systems were moveable, self-contained collectives of various skill sets – the operator who manned the controls at a dance; the selector who decided what records to play and when; the deejay who toasted over the records; the engineer who maintained the equipment; security; transport; and a crew of youngsters willing to carry things (so-called box boys) – all ruled over by the owner, who might have more than one rig. Putting on dances and selling drinks at them was a lucrative, ghetto business in music-mad 1950s Jamaica, and critically, this was an enterprise that kept the money generated in the community. More than that, however, the sense of ownership of these operations by people who had very little, elevated sound systems far beyond mere entertainment.

The combination of DIY skills, entrepreneurial innovation and business savvy flourished to such a degree that sound systems became the beating heart of the island’s ghetto-regulated music industry, as operators seeking to stay ahead of their competition with exclusive tracks, began recording for themselves. This was pretty much the methodology that fetched up in the UK in the 1950s, where it found a ready-made and eager audience and began to build an underground circuit of blues parties, makeshift dancehalls and word-of-mouth clubs. Within a decade or so it had facilitated an alternative music industry that 50-odd years later, virtually unchanged, has rewritten many of the mainstream’s rules.

Firstly, the rhythms of choice shifted from Trinidad and calypso to Jamaica and ska as UK soundmen used their connections back home to source new music. Naturally, it wasn’t long before they started recording for themselves and, again in accordance with how things played out in Jamaica, they eventually started offering records for sale. They were sold in a network of small, specialist outlets, not all of which were record shops; some weren’t shops at all, but barbers or cafes or anywhere where black people congregated. A business model was in place that remains as efficient and self-contained today: sound system operators put on dances, charging on the door and selling drinks – their own drinks ('Licence? What’s that?'); crowds support a sound system by virtue of its exclusive music; with an audience established, unique recordings go on sale, pressed and distributed by the sound system owner. Sales figures won’t have given U2 too many sleepless nights but, crucially, there was, and is, a self-sustainability in place that could support the constant evolution audiences expected.

Photograph of a sound system on Portobello Road, 1979 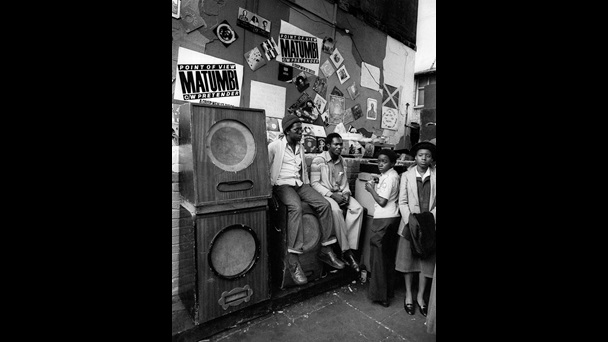 Usage terms You may not use the material for commercial purposes.
Held by© Adrian Boot

When playing those sound systems, the operators understood their audiences as being people much like them – people who, mostly, have worked hard for their money and are out to celebrate the end of the week. A good soundman knew that if people paid a tenner to get in he’d better give them a twelve pound dance, otherwise they’d let him know. And as said crowd was seldom more than a metre away, there weren’t many places to hide.

It was a delicate balancing of familiarity with moving their music forward to gain an edge, reading the mood of an audience and presenting them with what they might not have realised they wanted. The beauty of it was that the sound men only had to impress their crowd, not an A&R department, a series of marketing meetings, a video budget and some well-meaning white guy’s idea of what black music ought to be. It allowed British black music to define itself, and it developed accordingly, taking chances and making seemingly illogical leaps, based on a concept apparently alien to major record labels: what people really wanted. This is why black music in this country reinvents itself on practically a weekly basis while the rock business hasn’t really progressed beyond the Beatles.

As well as opening up substantial and substantially neglected markets to such a degree, it was always fast enough on its feet to embrace those beyond its core. This wasn’t so much eating the mainstream’s lunch as raiding its larder and cooking up a far tastier feast. Lovers rock reggae, with its obvious pop and Philly soul influences, boomed among black British teenagers while the mainstream believed the only 'genuine' reggae was songs of sufferation. Soul II Soul’s sound system dances were legendary, their clothing brand ubiquitous and their first singles storming up the charts by reflecting actual multi-culti London, before the music press so much as acknowledged them. Jungle appeared to make no sense at all – how could the Ragga Twins or General Levy or PJ & Smiley be so cheerful and still sell records? Then imagine the conversation between a US-owned multinational entertainment giant and two 17-year-old black kids from Dalston offering to sell them grime?

And with each musical generation the embrace of technology and evolving business practice meant that this alternative music business – 'indie' in the true sense of the word – grew its audience share. This was something else the mainstream missed; most white kids were robust enough to accept genuine black music rather than the black music cooked up for them by white people, and they could tell the difference. As pirate radio supplanted sound systems as the marketing method of choice and blues dances gave way to warehouse parties which in turn gave way to rave culture, British black music progressed from For Us By Us to By Us For Just About Anybody Who Fancies It Provided They Come In On Our Terms.

Whatever way you add all of this up, it’s massive business. In the final days of charts being compiled from sales of singles it wasn’t unusual to see them made up almost entirely of grime, X Factor and Ed Sheeran. The irresistible rise of DIY culture and black music pirate radio forced the BBC to launch Radio 1Xtra and made record companies alter their business model, reducing them to little more than physical product distribution services for leased recordings; meanwhile black music blogs and vlogs have successfully undermined the conventional music media. In any kind of corporate world such horizontal and vertical growth would be enough, but in this case, with the success of Jamal Edwards’s SB.TV it’s unlikely our sound system operators are finished yet.