‘We Jamaicans in 1950s England’ from the Daybook of Mrs Pettigrew

This is an edited extract from the memoir of Jamaican-born Verona Franceta Pettigrew neé Bennett who emigrated to Britain in 1956.

Writing about her life in the 1990s, Verona Pettigrew reflects on the pride of Jamaican people. She goes on to describe the bind that many female migrants found themselves in regarding marriage, family, work and ambition. In order to leave Jamaica, Verona herself hastily agreed to marry Thomas Ranford Pettigrew who had already moved to London. Though the marriage failed, together they started a business and bought properties throughout London.

Well-to-do Jamaicans of the 1950s did not think England was an advanced enough country for them to settle in. Unlike other West Indian islanders, only poor or relatively poor Jamaicans who none-the-less could afford the fares, left for the United Kingdom. Educated Jamaicans did not consider England an option at all. Many of our young men had travelled there during the war, and they did not like what they had seen. The educated ones among us rather opted for the United States of America, or Canada, wherever possible.

Jamaicans are a proud people. They tend to call a spade a spade. We do not think that anyone is superior to us. We were then largely law-abiding, churchgoers who respected others, honoured queen and country, and were ‘more British than the English’ in many ways. Britain was a real culture shock for many of us, who were mainly secondary school leavers that had come to work and/or further our education.

Most Jamaicans at that time came for five years only – no more. Due to discrimination from the establishment, and the host community, many people were never able to achieve their objective. A lot of us women made very unsuitable marriages, started a family, were forced to take low-paying jobs, separated from our husbands and found ourselves trapped for decades. Other islanders, whose standards of living were much lower than that of Jamaica at the time, did much better in England, as they were more accepting of poor working conditions and were therefore more amenable to the English. 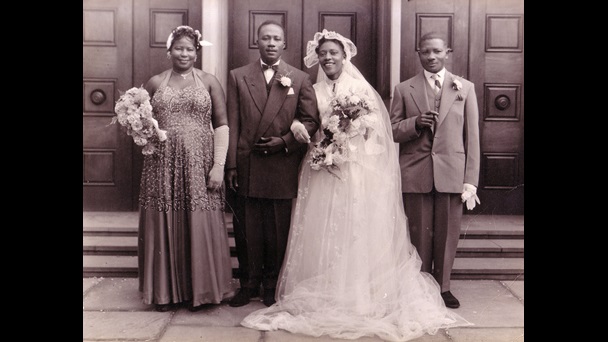 This photograph shows Verona Franceta Bennett and Thomas Ranford Pettigrew on their wedding day in London, 1956.

Jamaicans had a bad reputation. We were considered arrogant and cheeky. We were generally not those things, of course. All we wanted was to be treated fairly and with respect. In the areas where Jamaican immigrants lived, the natives had no reason to feel superior at all. Our accents may have been different, but in most cases, we were a lot more educated than they were.

This English woman saw me looking around on the Mile End Road one afternoon, and it must have been obvious to her that I didn’t know where I was. Instead of asking me where I wanted to go, however, she started to make hand gestures at me, as if I was deaf and dumb or stupid. When I asked, if she was addressing me. She said, ‘Really, love. What address are you after?’ I had to smile to myself, but she couldn’t grasp the funny side and took offense at my giggling.

Later, my husband and I opened a mini supermarket in Finsbury Park. He, his cousin, Marks (aka Boysie), and I, went to the cash and carry in a taxi one day to buy some stock. The Commissionaire saw us drive up, stepped off his stool, and shouted across the yard at us, ‘We’ve got no vacancies!’ Tom was livid. Boysie pushed out his mouth and was ready to ask the car to turn around. I said, no! I just got out of the cab, walked calmly up to the man and enquired, ‘How do you know you’ve got no vacancies, if you’re only what we would call “The Gate Man”’?

He fumbled about a bit and after due consideration, since it was 1960, he mumbled, ‘No!’ Well then, I said. We haven’t come for a job. We’re here to buy stock for our shop. It looks as if you should have everything we’ll need. Boysie looked on in awe, while Tom and I walked around making a mental note of the items we’d need from the shelves. The short, fat-fingered gentleman arranged for a rep to call at our premises, which was the correct way to conduct things, then, and we had a decent relationship with that cash and carry for the duration of our business.

As a family, we always selected properties on what other blacks would call a ‘white’ road. This was never anything intentional. We were mainly looking for properties in a dilapidated condition but situated on a good street. A challenge for us, but a deterrent to many others. For a while at least, my husband and I found out that we actually enjoyed doing up these old houses, especially because many of the properties then didn’t have proper plumbing and indoor bathrooms. We could renovate and modernise our own home before we moved in.

Tom would knock two rooms together for a bigger kitchen, or make a den for himself and his pals in the basement to keep all of their loose gully talk well away from me. I like peace and quiet, and as such, we avoided roads with noisy neighbours, and kept ourselves to ourselves. We stayed away from leasehold properties, and as my husband always said, if he was ever given a free leasehold place, he would never take it. It seems events proved him right, but that in itself is another story.

Read more extracts from The Daybook of Mrs Pettigrew.

Banner and article: © By kind permission of Paul Boakye.