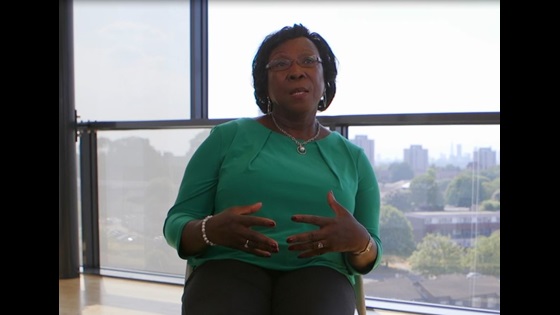 Read transcript of this video

This film is the outcome of a partnership project between the Caribbean Social Forum, the British Library and Chocolate Films, which took place in summer 2018.

It is inspired by the British Library’s exhibition Windrush: Songs in a Strange Land

Participants listened to original sound recordings held by the British Library ad made possible with the support of the HLF (Heritage Lottery Fund).

Members of the Caribbean Social Forum share their stories of journeying from the Caribbean to the UK and their experiences of settling in a new place to call home.

[Gilbert Clarke, RAF Veteran. Arrived from Jamaica in 1944] I came to England in 1944 after joining the Royal Air Force.

[Vincent Green, Retail Manager Export Department – John Lewis. Arrived from Jamaica in 1956] I came to the United Kingdom in 1956 in July.

[Velma McGregor, Director of English & Asst Head Teacher. Arrived from Grenada in 1961] I arrived in the United Kingdom in December of 1961.

[Sonia McIntosh MBE, Civil Servant – Houses of Parliament. Arrived from Jamaica in 1966] I came to England in 1966. That's the year that England last won the World Cup.

[Marie Bollers, Social Worker. Arrived from St Lucia in 1963] I came to England around the age of 10.

[Peggy Franklin, Auxiliary Nurse. Arrived from Barbados in 1959] 28th of December 1959, and it was rather cold.

(Anita) I thought “Oh, no this place is cold." I begin to shiver.

(Irma) I didn't have any boots, I was going around in sandals.

(Vincent) I saw all the buildings, so I says this place is full of nothing but factories!

(Tony) Windy, wet, and horrible. I had just left a sunny place to come to this 'mudder country' as we used to call it.


(Sonia) One of the things I remember was being bullied a little bit at school, because, I had this Jamaican accent.

(Velma) The children looked at us, and I remember being asked where was my tail. I said “What do you mean my tail?"
She said “Well, monkey's have tails." I must admit she did get a bunch of fives.

(Kyungu) I thought all the kids in England were stupid because they were doing things that I did when I was about 9 in Jamaica, and I just thought.
So initially, I learned nothing in secondary school in England until I left.

(Keith) When I came to Britain with the sponsorship from London Transport, so I actually came to a job.
I came to Britain, landed on the money, and on the Tuesday I was studying how to be a Bus Conductor.

(Gilbert) I wished to explore the world, Jamaica is lovely but it is limited. It was a chance to go to Europe or England, it is a big advantage.

Anita Griffiths
I came over here to do nursing because there was not much work in my home town.
So I wrote to a hospital in Brighton.
And then the other one was somewhere in Hertfordshire.
And, I said to myself that the first hospital that answers me, that's the one I would work in.
The Matron answered me, in Brighton, within two weeks to date,
and she said to me there is a school starting on 1st April, and she would have me if I would come over, and I said yes.

Neville McGregor
I left school when I was about 15, and then I had small jobs.
I was working with an engineering firm, I learnt to weld, after I left that firm, I went to a pram factory.
My Dad says “I need someone to work with me." I start working with him, because my Dad was a self-employed Plasterer.
Every time my Mum said “How do you work with him?" I said “It's Dad innit."

Enid Simmons
I got me job. The first job was doing them smoke pipes.
I then went to peel onions, them little tiny onions that they bottle now. Pickled onions.
You had to do a whole lot before you could get one penny.
Anyway, the advert came in for nursing and the Civil Service.
So, I went to this interview with the City London Hospital, and they showed me around because I really like nursing. The dead bodies put me right off.
I couldn't handle that bit. So, anyway I popped it and went for the Civil Service.
I worked in Holloway Prison for twenty years as a Prison Officer.

Vincent Green
In those days you could get a job. Walk out of one job and get into another job.
I bought the Evening News, and I see John Lewis has advertising for workers.
And, I worked for them for twenty- three years.

Sonia McIntosh MBE
My longest job was working at the Houses of Parliament.
I worked there for thirty-five years. That was quite interesting.
I went there and I thought “What a beautiful place!"
They took me for a little tour, and I thought it was really nice and I thought I would assimilate.
One of the things I did find, at that time there were very few black people working in the Houses of Parliament.
And, if they were they were usually in the kitchens, doing the mopping, doing the cleaning, whatever.
There wasn't very many role models for you to, kind of, look to.

Tony Durrant MBE JP
I felt that there was a lack of equality and diversity within the British Civil Service.
So I started activating and getting other black people together to ask the question:
Why aren't black people being promoted?
Why are they concentrated in the lower grades?

(Sonia) My career was built on hard work,
and it was finally recognised a few years back when the speaker recommended me for an MBE.
Which I got, and went to Buckingham Palace and collected my little gong.

(Tony) I ended up being given the MBE in 2008, and the citation says:
in recognition to the contribution to the voluntary sector in the North-West of England.

Kyungu Gordon-Walker
So my experience in education, on the one hand when I first came as a youngster it wasn't particularly good.
On the other hand, I think I had the opportunity to go to university without getting a grant because I had worked.
and I had some very good people supporting me.

Velmar McGregor
I was teaching for thirty-two years, and I thoroughly enjoyed it.
I think England is somewhere that has actually given me that opportunity to explore and to be the person I am today.

Peggy Franklin
Coming to England, you thought you'll go back home or whatever the case might be but it never worked that way.
You get married, and then other things fall into place.

Irma Reid
My plan was to stay five years, and then go back home.
Then I met boyfriend, then, that you know, have children, well my daughter.
So I have been here ever since, and I haven't regretted coming.

Marie Bollers
I see England as my home. St Lucia is home, but I think England is where I have been brought up.
I've worked, I've got friends, I've socialised.
So, I find when I go back, which is often - I still do that, I don't really fit in really.
They see you as a foreigner.

(Sonia) I don't know if it's right or wrong, but I've never really had the feeling that I want to go back to Jamaica to live.
I love visiting, I love the country, but I'm not sure I could live there now.
Because having been brought up here as a child, this is my home.
And, if it means fighting for what I need to be recognised here, this is where I am going to fight for it.

Special thanks to:
Caribbean Social Forum and Pamela Franklin

After World War Two, Britain was a country short of workers and needed to rebuild its weakened economy. Linda McDowell traces the history and experiences of the thousands of men and women who came to Britain from the Caribbean to work in sectors including manufacturing, public transport and the NHS.

'The Golden Fleece': The Windrush quest for educational desire

Can education be revolutionary? With a focus on the experiences and work of black and Caribbean women in Britain, Heidi Safia Mirza interweaves stories from her life, family and academic research to reflect on education and its potential for social change.

Migration stories in Errol John’s Moon on a Rainbow Shawl

Set in Trinidad, Moon on a Rainbow Shawl centres on a group of characters contemplating migration or other ways of leaving their shared tenement yard. Lynette Goddard examines the play’s setting, offstage spaces and the contrasting ambitions and perspectives of men and women.

‘We Jamaicans in 1950s England’ from the Daybook of Mrs Pettigrew

This is an edited extract from the memoir of Jamaican-born Verona Franceta Pettigrew neé Bennett who emigrated to Britain in 1956.

Following Columbus’ ‘discovery’ of the Americas in the late 15th century European imperial powers transformed the Caribbean. Explore the history of the region, the legacies of enslavement and colonialism, and how Caribbean society has been deeply shaped by rebellion, resistance and ideas of freedom.

From the late 1940s to the early 1960s thousands of men, women and children left the Caribbean, by sea and by air, for Britain. They were encouraged by the 1948 British Nationality Act that granted citizenship and right of abode in the UK to all members of the British Empire. Why did people come? What did they leave behind? What did they find when they arrived, and how did they shape Britain?

From Samuel Selvon’s Lonely Londoners to Andrea Levy’s Small Island; from calypso to the birth of Black British music; and the pioneering work of activists, journalists and teachers. Explore how the experiences of migration and settling in the UK, alongside the political landscapes of the Caribbean and Britain, have led to new artistic expressions, cultural movements and waves of activism.

Learn more about the Windrush generation scandal and the experiences of Caribbean-born British citizens who have been affected by the 2014 Immigration Act.