Claudia Jones is becoming better known as the founder of Carnival in London. But did you know that Claudia was also responsible for the first televised Black beauty competition in the UK? What motivated a communist activist and intellectual to become involved in beauty competitions? In this short piece Rochelle Rowe delves into Claudia’s Black beauty project.

Life was hard for West Indian settlers in Britain in the 1950s. As they went about their daily lives, they lived on the frontline of the fight against racism. Whether trying to find work, decent housing or attend school, they often encountered hostility, discrimination and racist abuse. 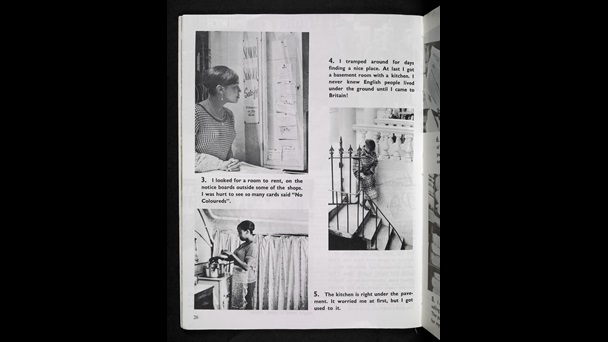 This photo essay from 1961 follows Joan, a 21-year-old woman from the Caribbean, as she arrives in London and begins to establish her life in the city. On this page, Joan struggles to find a room to rent due to racial discrimination: 'I looked for a room to rent, on the notice boards outside some of the shops. I was hurt to see so many cards said “No Coloureds”.'

Rather than helping the settlers, the government reacted by attempting to stop them from coming to Britain at all. They did this even though the country was in great need of workers.[1]

The politics of Carnival

In the summer of 1958 racist violence broke out and West Indian settlers were attacked in the streets. Kelso Cochrane, an Antiguan carpenter, was killed. In response, Claudia gathered together her friends and decided they would organise a carnival to celebrate Caribbean culture, heritage and arts. They wanted to show Britain and the world that Caribbean people had a culture and a history to be proud of![2]

Many beauty contests at the time, even those in the Caribbean countries with majority Black populations, were strictly reserved for White or very light-skinned people. Claudia used her newspaper, the West Indian Gazette, Britain's first commercial Black newspaper, to appeal to Caribbean women of all backgrounds and skin-tones. Many different women wrote in with their photos to be considered for the beauty competition. Before the famous slogan “Black is Beautiful” Claudia encouraged Caribbean people to be proud of their identity, their culture and their beauty.[3]

Photograph of contenders for Carnival Queen, 1959 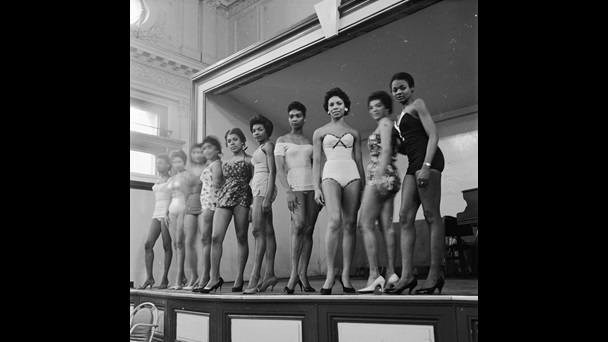 This photograph shows contenders for Carnival Queen rehearsing for the Caribbean Carnival in January 1959.

Where did Claudia get the idea for such an original and radically different beauty competition?

Claudia was born on the island of Trinidad, then a British colony, in 1915. Her family were educated and ambitious, but as poor, dark-skinned black people they had few opportunities. When Claudia was 8 years old the family moved to Harlem, New York.

In spite of the difficulties black people faced in the US, Harlem in the 1920s was a thriving centre of black cultural life, and would later be famous for its black musicians, artists, dancers and singers, such as Langston Hughes, Billie Holiday and Ella Fitzgerald. Growing up in Harlem shaped Claudia's life and ideas.

In Harlem the family faced hardship as they tried to build a better life. As a girl Claudia caught tuberculosis from the damp conditions of their poor housing and missed a year of school. Claudia's father worked as a janitor but also founded a newspaper in his spare time, the West Indian American. Her mother died prematurely after years of hard work in the garment industry.

These experiences shaped Claudia and as a young woman she joined the Communist Party to fight for workers' rights and social justice. There, she became a journalist. She developed her writing, campaigning and leadership, rising to the senior ranks of the Party.[4]

In Harlem Claudia was surrounded by Black beauty culture, the social world of Black hair and beauty: grooming, fashion and style. Black beauty was regarded as a means of social advancement and pride.

Work as a beautician, barber or selling products and garments door-to-door was generally safer and better-paid than work as a maid or machinist. Looking your best was linked to pride, a defence against racism and hope for a better future.[5]

Claudia saw opportunities in beauty culture. She visited beauty salons and barber shops to campaign against racism and talk to Black men and women about politics and their rights.[6]

Claudia is deported to Britain

Claudia was arrested and tried during the McCarthyist witch-hunts, the US government's campaign against intellectuals, artists and scientists on the political left. She was sentenced to be imprisoned for a year and a day, although served less time because prison conditions worsened her fragile health.

Claudia was therefore the first Black woman political prisoner in the US, otherwise known as a prisoner of conscience. After her time in prison it was decided that she would be deported to Britain rather than her native Trinidad. On the eve of her departure in 1955 her friends and comrades threw her a big party.[7]

“Communists were supposed to have two-heads”

In Britain, Claudia continued to bring together Black feminist politics, community leadership and Black beauty culture. She first met her friend and collaborator, actor Corinne Skinner-Carter, when Corinne visited her home to style Claudia’s hair. Corinne had never met a communist before. As she later remarked, “communists were supposed to have two heads!".[8]

Corinne was surprised to find that Claudia was “handsome” and “elegant” woman. Friends described Claudia as charismatic and stylish. Alongside marches and protests, Claudia continued to visit beauty parlours and barber shops to talk to Black people about their rights. Claudia was warm, lively and persuasive, able to inspire people with her original vision.[9]

Celebrating black beauty at Carnival and on the BBC!

Claudia wrote a special piece entitled, “A people's art is the genesis of their freedom” and published it in the souvenir programme.[10] She used this to show that Carnival and other art forms would help liberate Black people from oppression.

In the souvenir programme from the following year, Claudia thanked her many friends and collaborators who had helped make Carnival possible. These included writers Sam Selvon, George Lamming, Jan Carew and Sylvia Winter, and performers Nadia Cattouse and Pearl Prescod. It also pictured all of the beauty finalists who were African-Caribbean and Indian-Caribbean women of all complexions. In this way she used public spaces to celebrate the beauty of women of colour. 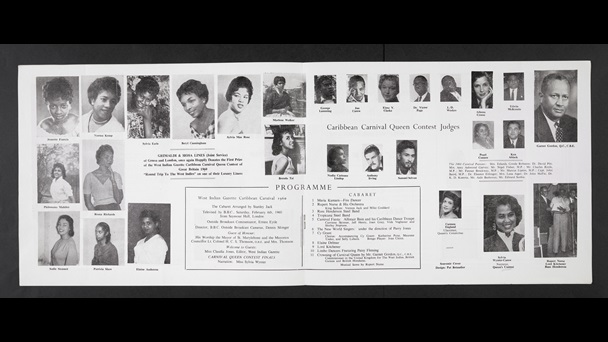 This souvenir pamphlet pictures the beauty finalists from the 1960 Caribbean Carnival.

The beauty competition was broadcast live into people's homes at a time when brown and Black women were hardly visible as icons of beauty in Britain. Claudia understood the power of imagery. She was unafraid to use beauty culture as a political tool at a time when many activities campaigners thought it trivial or unimportant. Through Carnival and Carnival Queen Claudia created affirmative and beautiful representations of Black people and Caribbean culture for all to see.

As Corinne later recalled: “without Claudia we would not have known [we were beautiful] because we used to judge everybody's beauty by the European standard. But Claudia [made] us proud of ourselves”.[11]