Unfinished business in the secondary school

Though the 1870 Education Act established a framework for the schooling of children in Britain the provision of secondary education has remained imbalanced for children based on factors such as gender, race and class. Laura Carter explores the long view of girls in secondary education.

When we think of changes in women’s education, we often think first about higher education. The past decade has seen a global trend of women overtaking men in entering and graduating from university. In the UK, the percentage of students completing higher education that are women has been over 50% since 1995. But if the widening of access to higher education has been one of the defining social changes of the second half of the 20th century, then it is worth remembering the parallel expansion of secondary education (that is, schooling beyond the age of 11), which laid the foundations for this change.

For girls and young women in Britain, this process was far from straightforward. Although access to secondary education became universal from the early 20th century, the actual form, quality and purpose of secondary education in Britain for most of the 20th century has differed greatly for girls and boys. It has also varied between middle-class and working-class girls, between girls of colour and white girls, and between ‘gifted’ girls and girls with physical and mental disabilities.

Given the fact of these imbalances, have secondary schools in Britain been a place of empowerment for girls and young women? Or have they been places where existing ideas about what different types of girls should and shouldn’t think and do are reinforced? Was there ever a space for feminism in the British secondary school?

What was secondary education for girls like from the early 20th century?

The 1870 Education Act created a national system of elementary education in England and Wales, and from 1902 this system was managed by Local Education Authorities. Following the 1918 Education Act, various routes to secondary education became available for the working classes, but most girls in the inter-war period still left school between the ages of 12 and 14. The education they received explicitly prepared them for low-skilled work, including domestic service. For example, this image from 1908 of Beaufort House School illustrates girls receiving education on how to wash and clean infants’ clothes.

Photograph of class for washing and finishing infants clothing at Beaufort House School, 1908 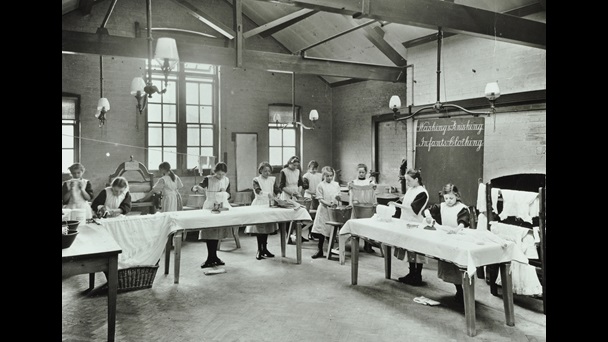 The 1944 Education Act for England and Wales brought in free, compulsory secondary education in England and Wales, and in 1947 the minimum school leaving age was raised to 15. In Scotland, this expansion had already begun in 1918 with the Education (Scotland) Act, which also brought Scotland’s Catholic schools into the state system. Under this post-1945 ‘tripartite’ system of secondary education, pupils sat a test at the age of 11 to determine whether they would attend an academic grammar school, a non-academic secondary modern school or a vocational technical school. Early research on the ‘11-plus’ system found that even when social class was discounted, girls were overall outperforming boys in primary schools in the 1950s. As a result of this success, slightly more girls than boys achieved grammar school places via the ‘11-plus’, although these girls were overwhelmingly middle-class and white. However, girls then tended to fall behind over the course of secondary schooling, especially in arithmetic, geography and science. In reality, very few technical schools were ever built, and the number of places available was skewed in favour of boys, preparing them for skilled manual jobs traditionally seen as suitable for men.

Meanwhile in the secondary modern schools, where most British girls (largely working-class) received their secondary education between the 1940s and 1960s, options for girls to progress their education and career options were severely limited. The majority of secondary modern schools did not offer girls the opportunities to take ‘O’ or ‘A’ levels. This did not change significantly until the introduction of an alternative school-leaving qualification, the CSE, which was first sat in 1965 (yet even CSEs tended to be more vocationally focussed). A study of curricula in secondary modern schools undertaken in the early 1960s found that boys spent more time on maths and science, and girls on practical subjects, for example housecraft and training in commercial skills such as shorthand and typing, reflecting the expectation that they would become office workers and, eventually, housewives.

Many women of this generation were keen to leave school as soon as possible (the minimum school leaving age until 1972 was 15) and begin earning their own money as a route to independence. Nursing, hairdressing and typing were all popular career aspirations. In the 1950s and 1960s youth unemployment was low, and opportunities for female school leavers were much better than their mothers had experienced a generation earlier (the vast majority of whom would have left school at age 14 or younger). Most importantly, they could look forward to entering clean, indoor jobs with relative ease, albeit depending to some extent on their locality. As a result, the majority of women who attended secondary modern schools between the 1940s and 1960s did experience upward social mobility throughout their life course, despite having had very little secondary education during their teenage years.

Historians tend to think of this period before the late 1960s as a ‘low point’ for feminism in Britain. Given the material constraints faced in the under-funded secondary modern schools, it’s easy to see why these schools could not offer the social and intellectual spaces so vital to feminist questioning and consciousness-raising. In the post-1945 grammar schools, of which a far higher proportion were all-girls’ schools, the fact that girls stayed on at school even just a year or two longer, were far more likely to be taught by teachers who themselves were university graduates and were taking external examinations in the same pool as their male peers, all combined to make them places where an equality or ‘rights-based’ feminism often flourished. Many women of this post-war generation credit their experiences of such a grammar school education, the highs and the lows, as being crucial to them becoming activists in the Women’s Liberation Movement of the 1970s.

How did comprehensive schools change the educational landscape?

Over the course of the 1960s and 1970s, Britain’s formal education system transitioned, and most secondary schools became non-selective comprehensive schools, many of them co-educational. Over 85% of comprehensive schools in England and Wales were mixed sex in 1982; the figure had risen to 90.4% by 1992. This change coincided with the emergence of second-wave feminism, and for many feminists and activists on the left, the comprehensive schools were a symbol of a brighter and more gender-equal future.

The 1970s also saw a new, young generation of teachers join the profession to teach in comprehensive schools. Comprehensive schools taught a broader range of subjects, including the social sciences, which girls liked and did well in. New kinds of extra-curricular activities and creative outlets for self-expression, such as student-run school magazines and co-educational school trips, helped to create a less deferential culture in the comprehensive schools. In these contexts, there was more space for teenage girls (and boys) to observe and question issues of gender difference in their everyday lives. These everyday feminisms were often not even linked to the public agenda of the Women’s Liberation Movement, or other organs of the women’s movement such as Spare Rib magazine, , which launched its own campaigns for schoolgirls in the 1970s and 1980s.

In urban areas especially, comprehensive schools were not only co-educational but also increasingly multi-racial environments. Much of the moral panic around comprehensive education in the 1970s was about race. White parents feared the impact of ‘immigrant’ children on standards and discipline in these much larger secondary school environments. As a result, girls of colour did not share equally in the gains of more freedom and self-expression described above. In debates about discipline and standards, boys of colour were often categorised as disruptive, threatening or ‘Educationally Subnormal’, whereas black and Asian girls were either ignored or stereotyped as passive or unambitious as a result of their cultural background.

In an ethnographic study of ‘black girls’ (i.e. girls of African-Caribbean origin) in a London comprehensive during the 1970s, Mary Fuller found that these girls were highly focussed on doing their work, homework and gaining academic qualifications, but also that they simultaneously rejected many other aspects of everyday school culture associated with being well-behaved or liked by teachers. Girls of colour faced a multi-layered range of stereotypes, and for many in the 1970s and 1980s school remained a place where the primary aim was to get the best qualifications possible to combat the sexism and racism they would face on the job market and in British society more broadly. 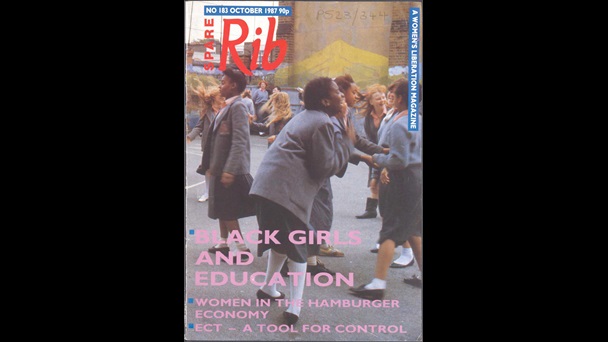 Usage terms Item 1: issue 183 p1 front cover, photograph of schoolgirls by Jenny Matthews
Usage terms: © Jenny Matthews Creative Commons Non-Commercial Licence Item 2: issue 183, pp 14-18 Not Victims not Superwomen, by Ruth Chigwada
Usage terms: We have been unable to locate the copyright holder for this item. Please contact copyright@bl.uk with any information you have regarding this item.

For girls of all backgrounds, races and ethnicities, gaining academic qualifications on equal terms with their male peers has perhaps been the most powerful tool of secondary education over the past 70 years, unlocking access to further and higher education. In 1986, when over 90% of pupils in England and Wales attended comprehensives, the GCSE was introduced. The GCSE was the first standardised school-leaving qualification in England and Wales (previously pupils took a mix of ‘O’ levels, CSEs and other semi-vocational exams). It was devised in response to fears about falling standards all around, but it made a big difference to girls’ achievements in secondary school. As the GCSE resulted in more pupils leaving school with five or more good grades, more of these pupils were girls. The business of achieving gender equality in the secondary school is far from finished, but giving girls opportunities to study the same subjects, take exams and get qualifications the same as boys has without doubt been a decisive force for change.

More articles on Education and work