Men have both stood alongside and against women in the promotion of gender justice. Lucy Delap explores the sometimes fraught but hopeful relationship between feminist activism and its male allies.

When comedian Robert Webb wrote How not to be a Boy in 2018, he pinpointed the many injuries to body and spirit which boyhood entailed. The pressures and repressions of masculinity can lead to high rates of male isolation, misery and suicide. Yet Webb was forced to be clear that this was no blame game, reminding his readers that ‘feminists aren’t out to get us’. He distanced himself from the thriving world of online forums, memes and blogs that promote ideas of male persecution. Men’s movement activists variously pin the blame for this persecution on feminists, divorcing wives, family law and leftist politics, and ignore the overwhelming data showing women to be more at risk of low pay, violence and shouldering the burdens of domestic labour.

These adversarial ‘gender wars’ are no new phenomenon in today’s splintering politics, but a long-standing tendency. There was a proliferation of men’s rights groups in Britain from the 1970s onwards. Established in 1974, Families Need Fathers was one of the first, subsequently followed by others including the United Kingdom Men’s Movement, Fathers 4 Justice, Justice for Men and Boys and the Family Law Action Group. Their actions were sometimes extremely high profile. Superhero-costumed men climbed the roofs of courts, theatres and churches in the early 2000s, and flour-bombed Tony Blair in the Houses of Parliament. But men’s movement politics rarely entered the mainstream; ‘men behaving sadly’ was the description of a contemporary magazine in 1995.[1]

The prominence of these groups and their talk of ‘men as victims’ obscures a much richer set of possibilities around the politics of masculinity. There has been a long history of men campaigning for feminist goals. Utopian socialist William Thompson and liberal philosopher John Stuart Mill played important parts in the 19th-century women’s movement.

Cartoon of John Stuart Mill as the ‘Feminine Philosopher’ from Vanity Fair, 1873 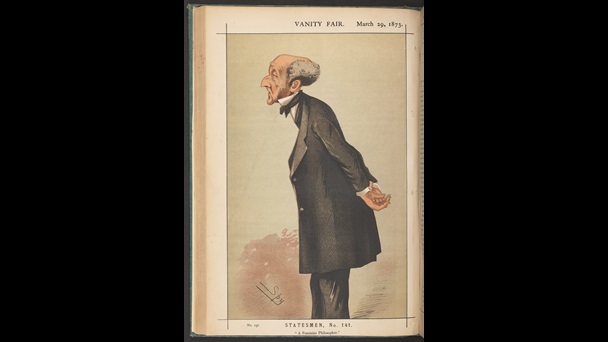 During Edwardian suffrage campaigning, individual men and organised men’s leagues supported women’s demands for enfranchisement, hunger struck and were imprisoned; four such men are commemorated on the plinth of the 2018 statue of suffrage leader Millicent Fawcett.

The 1970s and Women’s Liberation

In the 1970s, when women’s liberation transformed gender politics, some men again felt that feminist politics could include them. The British women’s movement was booming; a map drawn from Spare Rib magazine shows consciousness-raising groups, women’s centres and demonstrations proliferating across the country. But attempts to include men in feminist gatherings ran up against men’s tendency to dominate discussions. Ellen Malos’s oral history, part of the British Library’s Sisterhood and After collection, described the moment at the Skegness National Women’s Liberation Conference in 1971 when a male attendee ‘stood up and denounced the lesbians, and, stood up and said, “I have been fighting for women’s liberation all my life”, or words to that effect … So the whole thing just erupted, and … women just actually rushed up and [laughs] dragged him off the platform. And, and we passed a resolution I think that men should not attend the conference’. Activist women preferred to explore sisterhood, solidarity and women’s sexualities without men’s inhibiting presence.

https://sounds.bl.uk/resources/womens-rights/bl-wubav045-c1420-06-03-ellen-malos-male-activist-m-edited.mp3
00:00
Update Required - To play the media you will need to either update your browser to a recent version or update your {link}

In this interview extract, Ellen Malos (b.1937) describes an incident at the Skegness National Women’s Liberation Conference in 1971 with a male supporter.

And what happened at Skegness was that there were men at the Conference – and this is where the exclusion of men from the Conference started because men could run the crèche, but they could also be there. And it was one specific Maoist man from one specific group, which called itself – what? – it was a split from the main Maoist movement. It was the Union of ¬¬Women for Liberation, which there was a woman call Chris McKinnon, I remember that who was much more reasonable. Um and then there was [sighs] oh, what’s her name? It was in my head and it’s gone – um – a very pale person, she was married to an Indian guy. And he stood up and denounced the Lesbians and stood up and said ‘I have been fighting for women’s liberation all my life’ or words to that effect ‘and these people should be’ implying they should be excluded. So the whole thing just erupted, and Paddy’s partner and various other women just actually rushed up and [laughs] dragged him off the platform. And, and we passed a resolution I think that men should not attend the conference. Or maybe that was not the case at that point, but certainly he was not going to be let in.

This did not mean the end of some men’s aspirations to engage with feminist ideas and work out how their own lives might change in response. Men were reading influential texts of feminism such as the work of Simone de Beauvoir, Germaine Greer, Kate Millett, Juliet Mitchell and Ann Oakley. Many of these men were socialists and had absorbed something of the rhetoric of women’s empowerment that was common in leftist politics. As ‘Amir’, a member of a men’s group in the Midlands, noted, however, his commitment was quite superficial: ‘on gender issues, I probably... would have said generally yes, [laughs] as a socialist you would say, oh yes, I am interested in that, without really being aware of the kind of, er, the kind of power issues you are involved with, particularly with women’. Yet his commitment was strong enough to take him into men’s groups and anti-sexist conferences: ‘I wanted to reinvent myself as a man. … For me it was both an emotional need and a political need’.

Others came to feminism through less cerebral routes; ‘Spike’, whose interview is part of the British Library’s Unbecoming Men collection, recalled growing up in a working-class home in Great Yarmouth and how punk music seemed to open up another universe. Around 1976 he recalled ‘seeing and hearing Patti Smith, I just went “my god, that’s fantastic”’. He went on to live in London squats where feminist politics and creative arts flourished.

Jeff Hearn joined men’s groups in Bradford, after becoming disenchanted with party politics which he found to be ‘very authoritarian, very hierarchical, very one-dimensional’. He began buying Spare Rib magazine, and as a father of young children got involved in campaigning for childcare with the Bradford Under Fives Group.

Men such as Jeff, Spike and Amir were determined to rebalance power towards women and counter male violence. Many also hoped that their own lives would change, with more reciprocal and caring sex lives, more space for men to feel and express emotions, more time with their children.

These goals were not easy to achieve, but the anti-sexist movement had real momentum behind it. Thousands of men joined men’s groups or signed up to adult education courses that looked at topics such as ‘Sex Roles in Society’. They published anti-sexist magazines such as Achilles Heel.

Jeff got involved in Bradford’s local men’s magazine Low Plains Drifter. Anti-sexist men offered to provide childcare at feminist conferences or for single mothers. They met in men-only discussion groups to talk about how they might learn to trust other men with their fears and emotions. For many straight men this raised questions of homophobia and difficulties of feeling physically comfortable with other men. Gay men were also keen participants within anti-sexist circles, aware that the gay male scene sometimes had misogynous elements.

It was not always easy for feminist women to respond constructively. Spare Rib occasionally reported on anti-sexist men’s initiatives (see Spare Rib 032, February 1975, p. 21), but not always with much optimism about whether men could change. The anti-sexist men’s movement was committed to accountability to feminist women, but with so many different kinds of feminist politics on offer it was hard to put this into practice. Some feminists welcomed men’s childcare contributions; others called them tokenistic. White women were often hostile to anti-sexist men’s efforts, fearing that it was another attempt to claim women’s energy and attention. Within the Black women’s movement, however, there was a different sense of gender dynamics. There was plenty of critique of the macho male elements of Black Power and Afro-centric culture from Black feminists and womanists. As Iyamidé Hazeley put it starkly in the iconic Many Voices One Chant Black feminist issue of Feminist Review:

Can you stop wearing me, playing me
Stop strumming my emotions?
You call me ‘Sister’ Brother,
Yet I know
That is simply a Psychological lever to prise apart my legs.[2]

Nonetheless, as one activist recalled, ‘the issues of sexism from white men was very different from the issue of sexism from Black men, because Black men don’t have the power that white men have’.[3] Black women’s groups such as the Manchester Black Women’s Co-Operative resisted women-only activism. They worked closely with male family members and allies to jointly address issues of racist policing, schooling and cultural exclusion. And within the anti-sexist men’s movement, men of colour and Jewish men often worked hard to raise issues of anti-racism and anti-Semitism. Amir twinned his commitment to the anti-sexist men’s movement with anti-apartheid activism and noted that his white-dominated men’s group ‘gradually learnt to appreciate issues about race’.

The flourishing men’s groups and magazines of the 1970s and 1980s were a fragile coalition, which began to diverge into some very different tendencies in the years of austerity and right-wing governments of the 1980s and 1990s. Some men continued to identify very directly as feminists; others began to look more into therapy, alternative religions and male self-development. Amir reported that his men’s group sceptically read Robert Bly’s 1990 book Iron John on ‘drumming and er, God. … We had a good laugh about that’. Others felt that their commitment to feminism was less about meetings, conferences and publishing periodicals and more about being more present as fathers, even after separation or divorce. David, part of a long-standing anti-sexist men’s group in Cambridge, felt that it was a feminist act to challenge ‘the hopeless man, leaving his family, um, adrift’, and encourage men to step up to the task of childcare. He became involved with Families Need Fathers in Cambridge in the early 1990s after his own positive experiences of shared child custody. The branch included both men and women and at the local level seemed in keeping with feminist goals of equal parenting. Anti-sexist activism could thus be interwoven with the work of organisations that also on occasion adopted ‘men’s rights’ rhetoric.

In the present-day climate of populist and often misogynist politics, men’s movements are best known for their mobilisation around the world to limit women’s reproductive rights and preserve heterosexual marriage. We should not ignore the risks that anti-feminist politics pose. But we also should not allow the misogynist men’s movement to obscure a more hopeful legacy left to us by the anti-sexist men’s movement, which promoted radical, creative and feminist interpretations of how intimate lives and social institutions might be transformed to promote gender justice.