Although seen as commonplace today, cycling in the late 19th century proved to be an activity both liberating and restrictive for women. Charlotte James explores how cycling revolutionised and agitated the fashions of Victorian women.

In the late 19th century, the bicycle became a popular and important mode of transport for many Victorians. Bycycles were used for leisure by the upper classes and were a convenient form of transport for the middle and lower classes. However, bicycles came to mean much more for many women and were crucial in them gaining a level of independence. Bicycles allowed women to escape the prying eyes of their household and provided them with an opportunity to exercise. Suddenly, women were able to travel where they wanted when they wanted, giving them a new feeling of self-reliance and freedom. There were people opposed this new development, with some arguing that straddling a bicycle would lead to sexual arousal and others raising concerns about women exhausting themselves with too much exercise.[1] Nevertheless, these views did not stop women from enjoying this new mode of transport, and cycling opened up a whole new world of independence.

The number of women cycling grew greatly in the late 19th century, so much so that the first cycling organisation solely for women was established as early as 1892. The Lady Cyclists’ Association was founded in London by Lillias Campbell Davidson, who believed that cycling would emancipate women from many of the limitations placed on them by society. She wrote that the bicycle offered ‘the greatest boon that has come to women for many a long day’.[2] The Lady Cyclists’ Association organised rides, tours and social gatherings for female cyclists. It also published a handbook of places to stay on cycling tours and a monthly journal The Lady Cyclist.

Although they were enjoying this new mode of transport, many members of the Lady Cyclists’ Association were confronted by the impracticality of their clothes. They began advocating for women’s right to wear more comfortable clothes whilst cycling and dressed in more practical outfits. Typically, Victorian women wore tight corsets to accentuate their waists and long skirts with heavy, layered petticoats. Whilst cycling, their long skirts flapped in the wind, rode up over their knees and got caught in the bicycles’ spokes and pedals, leading to several fatal accidents. In her autobiography I Have Been Young the suffragist Helena Swanwick wrote of the dangers of cycling: ‘My long skirt was a nuisance and even a danger. It is an unpleasant experience to be hurled on to stone setts and find that one’s skirt has been so tightly wound round the pedal that one cannot get up enough to unwind it. But I never had the courage to ride in breeches except at night’. The layered petticoats and tight corsets also caused many women to overheat and become tired, which limited how far they could travel.[3]

As a result, women adapted what they wore to allow them to cycle more easily and frequently. Some women tackled their flapping skirts by attaching metal belts, buckles and straps to their skirts to either weigh them down or fasten them to their bodies. Others chose to wear bloomers or knickerbockers, which were ankle-length baggy-kneed trousers that could be worn underneath of or instead of a skirt.. As the image below shows, the knee-length baggy trousers allowed the rider to effortlessly straddle the bicycle. By removing the tight corset and large, heavy skirts, this outfit provided women with more practical cyclewear and made riding a bicycle much easier. 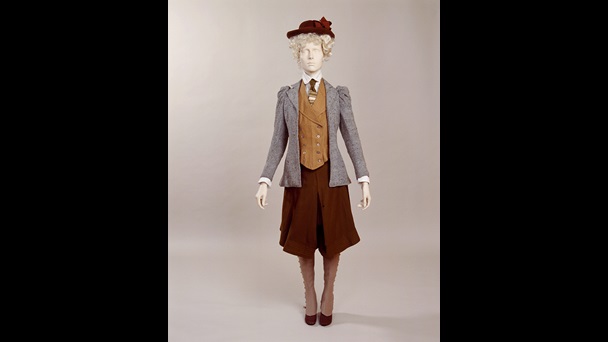 Several women began inventing their own ‘convertible cyclewear’, which aimed to be both respectable and practical. Research at Goldsmiths University led by Dr Kat Jungnickel explores the women who made these radical new forms of cyclewear and patented their inventions. One example is Alice Bygrave, who created a skirt with a dual pulley system that was sewn into the front and rear of the skirt. Women could pull on two cords that adjusted the height of the skirt so that it lifted above their knees to reveal bloomers or knickerbockers underneath. Bygrave patented the design in 1895 and it was a great success, with many women purchasing these new cycling skirts that were manufactured and distributed by Jaeger. 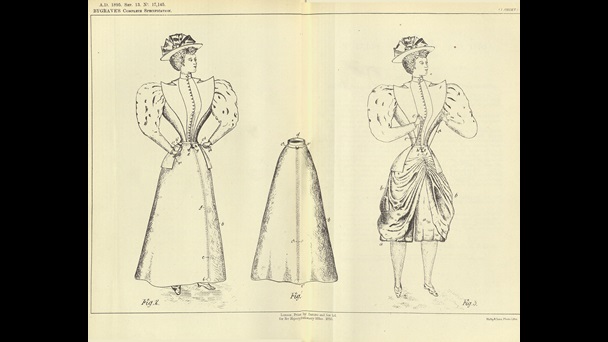 Mary and Sarah Pease also patented their radical all-in-one cycling skirt and cape in 1896. This skirt was designed for women who wanted to wear bloomers whilst cycling. Buttons ran down the length of the skirt and could be undone to allow the rider to use the skirt as a cape. The ties at the waist were used to secure the cape around their necks, meaning women could quickly and easily change their outfits. 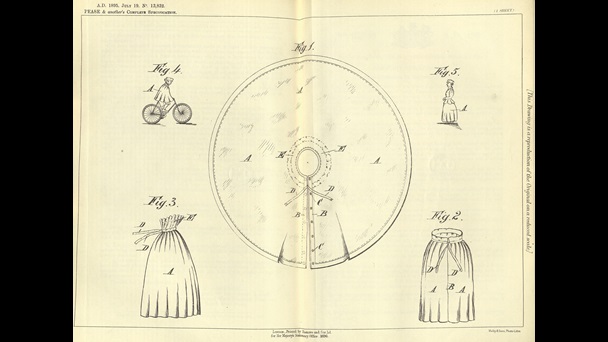 Women’s rights activist Henrietta Müller created an entire outfit for female cyclists, with a tailored jacket, A-line skirt and all-in-one blouse bloomer undergarment. Loops were sewn into the hem of the skirt, which could then be attached to buttons at the waist to lift the hem of the skirt above the knees. Muller also included several pockets in her design that allowed women to carry personal items on their cycling trips. The new outfits invented by Bygrave, Pease, Müller and many others led Miss F. J. Erskine to publish Lady Cycling: What to Wear and How to Ride in 1897. This book, which was republished by the Library in 2015, promoted the different clothing options available to female cyclists and encouraged women to keep cycling.

How did society respond to changing fashions?

These new cycling fashions strove to tackle the challenges facing Victorian female cyclists and ensure their freedom of movement. Many female cyclists were condemned for wearing these new outfits, which were criticised by many as being immodest and masculine. Indeed, both men and women verbally and physically abused female cyclists who chose to wear bloomers or knickerbockers whilst cycling. This was largely because Victorians advocated strong morality and traditional gender roles, with women being firmly situated as mothers and wives. In rejecting tight corsets and long skirts in favour of ‘masculine’ bloomers and cycling outfits, female cyclists challenged ideas around traditional gender roles and disputed the assigned role of women as being solely in the home.

Although they faced a severe backlash as a result, women’s love for the bicycle and their newfound freedom outweighed this criticism. Cycling opened up a new world of independence for many Victorian women. Indeed, cycling was important to the suffrage movement, with activists such as Alice Hawkins using this mode of transport to promote women’s fight for the vote throughout towns and cities. The bicycle came to symbolise the suffrage movement and helped women escape some of the restrictions placed upon their lives. This mode of transport provided women with more freedom of movement, while their new cycling outfits challenged limited ideas around women’s fashion. Despite criticisms, women continued to invent new cycling outfits and taught each other how to adapt their clothing. In doing so, they protested against restrictive ideas of how a woman should act in public life and what she should wear, and so challenged traditional gender norms.