Charles Dickens (1812–1870) published this ‘Condition of England’ novel in 1854. His setting was a mythical place called Coketown, partly inspired by a visit to the Northern industrial town of Preston where he had observed a strike. Dickens was motivated by social concerns: he feared that industrialisation and ‘progress’ threatened to stunt human sympathies, forcing people into mechanistic social roles. He conveys what life was like in factory towns by blending documentary realism with imaginative grotesques and vivid, melodramatic elements. Thomas Gradgrind, a staunch advocate of rules and principles, has raised his children in a cold, loveless atmosphere. His Utilitarian philosophy is based upon rational self-interest. The text draws a marked contrast between Fact and Fancy – for the residents of Coketown, delight is found only in the entertainments provided by Sleary's circus. 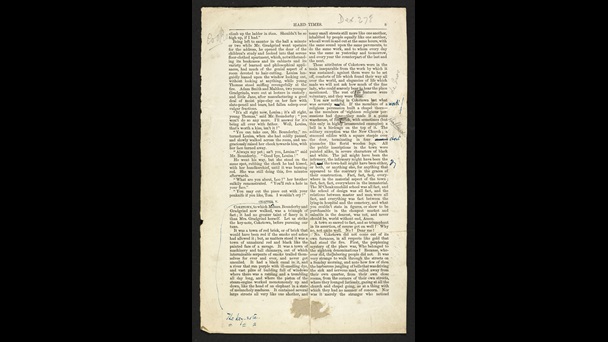 Popular culture and the impact of industrialisation

Industrialisation had a dramatic effect upon all aspects of Victorian life. Paul Schlicke examines how it led to the growth of commercial entertainment and the presence of these new cultural forms in the novels of Charles Dickens.

Simon Callow CBE examines Dickens as an actor who gave lively and emotional performances of his own works to an enthralled public on both sides of the Atlantic.

Paul Schlicke considers the contrast between fact and fancy in Hard Times, exploring how Dickens uses the excitement of the circus to challenge the doctrines of 19th-century philosophers and political economists.

Dickens's critique of industrialisation in the novel Hard Times.