Both Hyperion and the revised version The Fall of Hyperion are unfinished allegorical poems. The drafts were written by John Keats (1795-1821) in 1818-9, but he was disheartened by critical reception of his earlier work, Endymion. Nevertheless, the Hyperion fragment was published in 1820; The Fall of Hyperion followed in 1856, 35 years after Keats’s death. Keats’s blank-verse epic draws upon the classical Greek myth of the Titans being deposed by their children, the younger Olympian gods. In the aftermath of the struggle, Hyperion is the only Titan who has not fallen. Keats engages with profound issues about revolutionary change, about the evolution of consciousness, and about the significance of the poet’s role. 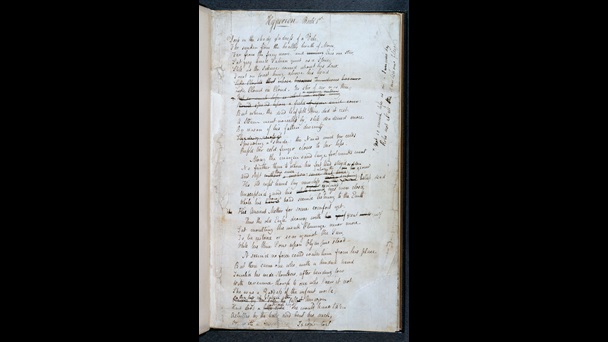 Full title:
'The Fall of Hyperion - A Dream'

Stephen Hebron explores Keats’s understanding of negative capability, a concept which prizes intuition and uncertainty above reason and knowledge.

Dr Stephanie Forward explains the key ideas and influences of Romanticism, and considers their place in the work of writers including Wordsworth, Blake, P B Shelley and Keats.

Manuscript of ‘Ode on Melancholy’ by John Keats (1820)