A poignant tribute to Arthur Henry Hallam, this poem by Alfred Lord Tennyson (1809-1882) was written between 1833 and 1850, and published anonymously in 1850. Tennyson’s devastation at the sudden death of a close and supportive friend had depressed him profoundly; but after the agony of loss there was a gradual, tentative movement towards acceptance. He diverted those feelings into a series of moving lyrics, published in 1850. Contemporaries who experienced bereavement found the words particularly consoling. Queen Victoria was one of those who took comfort. Tennyson’s elegy has continued to touch subsequent generations of readers. As he said: ‘It is rather the cry of the whole human race than mine.’

The papers of Arthur Henry Hallam, including manuscript versions of Tennyson's In Memoriam A.H.H. 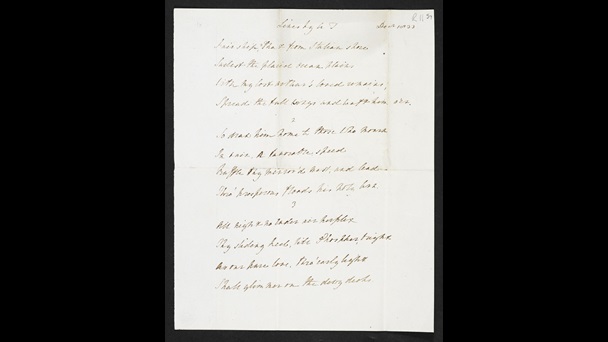 Full title:
'The Way of the Soul'

When Tennyson died in 1892, 11,000 people applied for tickets to his funeral in Westminster Abbey. Dr Stephanie Forward considers the poet's huge popularity in the second half of the 19th century, and the decline of his reputation in the 20th.

'In Memoriam A.H.H.': composition and reception

'In Memoriam A.H.H.', a tribute to Tennyson’s beloved friend Arthur Henry Hallam, was a defining poem of the Victorian period. Dr Stephanie Forward explores Tennyson’s composition process, and considers how the poem was received during Tennyson’s lifetime and into the 20th century.

An introduction to 'In Memoriam A.H.H.'

Tennyson wrote 'In Memoriam A.H.H.' as a tribute to his beloved friend Arthur Henry Hallam, who died aged 22. Dr Holly Furneaux explores how the poem uses individual bereavement to grapple with broader questions of faith, meaning and nature.

The papers of Arthur Henry Hallam, including manuscript versions of Tennyson's In Memoriam A.H.H. (1816-1833)