A poem by Samuel Taylor Coleridge (1772-1834), published 1816. Coleridge composed ‘Kubla Khan; Or, A Vision in a Dream’ in 1797 under the influence of opium. He fell into a reverie while reading a travel account, but his dream of the exotic Orient was interrupted by ‘a person on business from Porlock’. Although he tried to write down his recollections, only a 54 line ‘fragment’ remained. Coleridge conveys the pleasure induced by opium; however, his later work ‘The Pains of Sleep’ (1803) counters this by describing the torment of addiction. ‘Kubla Khan’ was eventually published in 1816, at Lord Byron’s request. Critics have explored a wide range of possible interpretations. 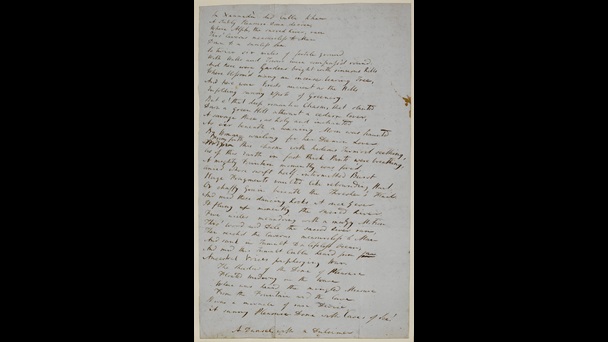 This manuscript is a fair copy (a neat copy) of Coleridge's 'Kubla Khan'. It was written out on two sides of blue-tinted paper, in preparation for being sent to the printer. It shows evidence of numerous substantive textual changes and apparently predates the version published in 1816.

Full title:
'A Vision in a Dream'

An introduction to Kubla Khan: or A Vision in a Dream

Dr Seamus Perry considers the composition and publication history of Kubla Khan, and explores how Coleridge transforms language into both image and music.

Representations of drugs in 19th-century literature

Opium was widely available in the 19th century, sold by barbers, tobacconists and stationers. Writers including Samuel Taylor Coleridge, Elizabeth Barrett Browning and Charles Dickens all used the drug, for pleasure or as medicine. Professor Sharon Ruston explores how drugs provided both inspiration and subject matter for the literature of the period.

Review of Coleridge's Christabel; Kubla Khan, a Vision; The Pains of Sleep from The Examiner

Purchas his Pilgrimage; or, Relations of the World and the Religions

An enquiry into the nature of the human soul

The historical and philosophical sources for Coleridge's Kubla Khan.