The debate on the origins of World War One

Beginning with the assassination of Archduke Franz Ferdinand, Dr Annika Mombauer explores the opposing debates about the origins of World War One. Is it possible for historians to arrive at a consensus?

How could the death of one man, Archduke Franz Ferdinand, who was assassinated on 28 June 1914, lead to the deaths of millions in a war of unprecedented scale and ferocity? This is the question at the heart of the debate on the origins of the First World War. How did Europe get from the assassination of Franz Ferdinand and his wife to the situation at the beginning of August when Germany and Austria-Hungary were at war with Serbia, Russia, France, Belgium, and Britain? Finding the answer to this question has exercised historians for 100 years, and arriving at a convincing consensus has proved impossible. 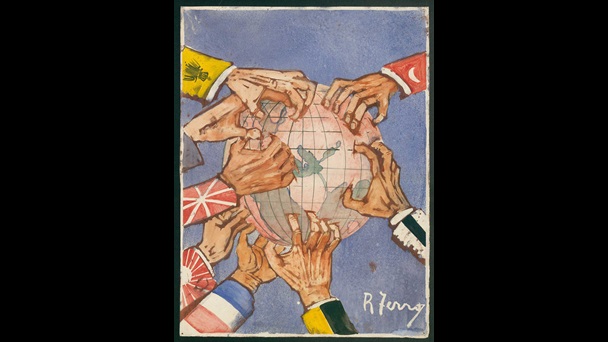 'Cupidity', a satirical drawing showing the hands of men from countries involved in World War One, arguing for control of the world.

The need to fight a defensive war

Establishing the responsibility for the escalation of the July Crisis into a European war – and ultimately a world war – was paramount even before fighting had begun. The governments of Great Britain, France, Russia, Germany, and Austria-Hungary tried desperately to ensure that they did not appear to be the aggressor in July and August 1914. This was crucial because the vast armies of soldiers that would be needed to fight this war could not be summoned for a war of aggression. Socialists, of whom there were many millions by 1914, would not have supported a belligerent foreign policy, and could only be relied upon to fight in a defensive war. Populations would only rally and make sacrifices willingly if the cause was just – and that meant fighting a defensive war.

The French and Belgians, Russians, Serbs and British were convinced they were indeed involved in a defensive struggle for just aims. Austrians and Hungarians were fighting to revenge the death of Franz Ferdinand. Germans were assured by their Kaiser, Wilhelm II, and their Chancellor, Theobald von Bethmann Hollweg, that Germany’s neighbours had ‘forced the sword’ into its hands.[1] In 1914, Germans were certain that they had not started the war. But if not they (who had after all invaded Belgium and France in the first few weeks of fighting), then who had caused this war?

German satirical map of Europe in 1914 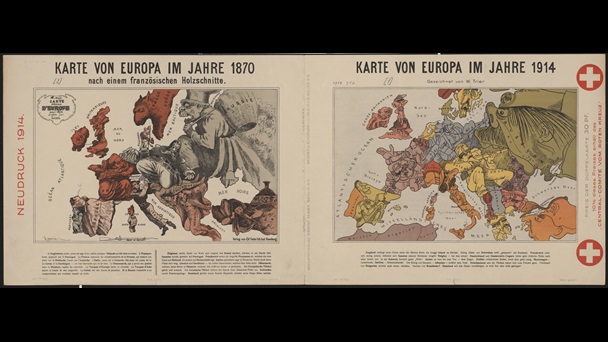 From the victors’ war guilt ruling to a comfortable interwar consensus

For the victors, this was an easy question to answer, and they agreed at the peace conference at Paris in 1919 that Germany and its allies had been responsible for causing the Great War. Based on this decision, which was embodied in Article 231 of the Treaty of Versailles, vast reparations would be payable. This so-called ‘war guilt ruling’ set the tone for the long debate that followed on the causes of the war. From 1919 onwards, governments and historians engaged with this question as revisionists (who wanted to revise the verdict of Versailles) clashed with anti-revisionists who agreed with the victors’ assessment.

Sponsored by post-war governments and with access to vast amounts of documents, revisionist historians (many, but not all, German) set about proving that the victors at Versailles had been wrong. Countless publications and documents were made available to prove Germany’s innocence and the responsibility of others. Arguments were advanced which highlighted Russia’s and France’s responsibility for the outbreak of the war, for example, or which stressed that Britain could have played a more active role in preventing the escalation of the July Crisis.

In the interwar years, such views influenced a newly developing consensus that no longer foregrounded Germany’s war guilt, but instead identified a failure in the alliance system before 1914. The war had not been deliberately unleashed, but Europe had somehow ‘slithered over the brink into the boiling cauldron of war’, as David Lloyd George famously put it.[2] With such a conciliatory accident theory, Germany was off the hook, and instead of remaining a former troublesome enemy could become a potential future ally against the increasingly threatening-looking Soviet Union. And so a comfortable consensus emerged and lasted all through the Second World War and beyond, by which time the Great War (now known as the First World War) had been overshadowed by an even deadlier conflict. 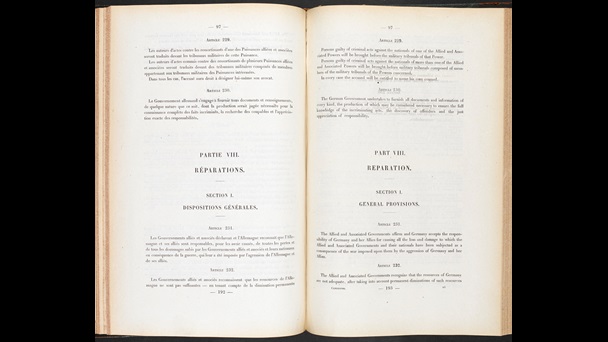 Extract from the Versailles Treaty, stating that 'Germany accepts the responsibility [...] for causing all the loss and damage to which the Allied and Associated Governments and their nationals have been subjected [...]'.

The Fischer school challenge to the revisionist consensus

There was little reason to question this comfortable orthodoxy after 1945. The first major challenge to this interpretation was advanced in Germany in the 1960s, where the historian Fritz Fischer published a startling new thesis on the origins of the war which threatened to overthrow the existing consensus. Germany, he argued, bore the main share of responsibility for the outbreak of the war. Moreover, its leaders had deliberately unleashed the war in pursuit of aggressive foreign policy aims which were startlingly similar to those pursued by Hitler in 1939.[3] Backed up by previously unknown primary evidence, this new interpretation exploded the comfortable post-war view of shared responsibility. It made Germany responsible for unleashing not only the Second World War (of this there was no doubt), but also the First – turning Germany’s recent history into one of aggression and conquest.

The German establishment, which included leading historians and politicians, reacted with outrage to Fischer’s claims. They attempted to discredit him and his followers. The so-called Fischer school was accused of ‘soiling its own nest’, and in the context of the Cold War of the early 1960s, it is not difficult to see that the question of the origins of the First World War was of serious contemporary political significance. Those willing to question Germany’s recent past and those wanting to hide any potential wrong-doings by Germany’s former leaders clashed in a public dispute of unprecedented ferocity.

In time, however, many of Fischer’s ideas became accepted as a new consensus was achieved. Most historians remained unconvinced that war had been decided upon in Germany as early as 1912 (this was one of Fischer’s controversial claims) and then deliberately provoked in 1914. Many did concede, however, that Germany seemed to have made use of the July Crisis to unleash a war. But its government was not the only one to do so. In the wake of the Fischer controversy, historians also focused more closely on the role of Austria-Hungary in the events that led to war, and concluded that in Vienna, at least as much as in Berlin, the crisis precipitated by the assassination of Archduke Franz Ferdinand was seen as a golden opportunity to try and defeat a ring of enemies that seemed to threaten the Central Powers.

New questions but no new consensus

In recent years this post-Fischer consensus has in turn been revised. Historians have returned to the arguments of the interwar years, focusing for example on Russia’s and France’s role in the outbreak of war,[4] or asking if Britain’s government really did all it could to try and avert war in 1914. Germany’s and Austria-Hungary’s roles are deemphasised, and it is stressed that there were decision-makers in all the major capital cities who considered a general European war in August 1914 to be a risk worth taking. After 100 years of debate, every conceivable interpretation seems to have been advanced. In some of the most recent publications, even seeking to attribute responsibility, as had so confidently been done at Versailles, is now eschewed.[5] Is it really the historian’s role to blame the actors of the past, or merely to understand how the war could have occurred?

Such doubts did not trouble those who sought to attribute war guilt in 1919 and during much of this long debate, but this question will need to be asked as the controversy continues past the centenary. The current consensus on why it broke out is ‘that there is no consensus’.[6] After 100 years of arguing about the war’s causes, this long debate is set to continue.