The war effort at home (movement into war production, rationing, and food supply)

From the borrowing of money to the employment of women in industry, Professor David Stevenson examines the strategies used at home to maintain arms for troops, and basic supplies for civilians.

This, the British Munitions Minister Winston Churchill told his workforce in 1917, was a ‘steel war’. After the opening offensives failed, the conflict became a struggle of attrition in which both sides expended vast quantities of material. Both had now to mobilize their economies in order to provide not only armaments for the fighting fronts but also supplies – most basically of food – for civilians at home. Their unequal success in doing so shaped both the war’s course and its conclusion.

The prerequisite for economic mobilization was finance. Britain met only a quarter of its costs by raising taxes; the US proportion was similar, and in the other belligerents it was even smaller. The principal means of covering expenditure was therefore borrowing. Governments borrowed abroad (Germany from the Netherlands and Sweden; France and Italy from Britain; Britain from Canada and the US), but primarily at home. They offered attractive interest rates and appealed to the patriotism of their citizens, who responded by purchasing government stock on a scale that previously would have been unimaginable. It was still too little to close the gap, and governments also paid their bills by printing money. The consequence everywhere was inflation, which in Russia, Austria-Hungary, and Turkey verged on hyper-inflation. 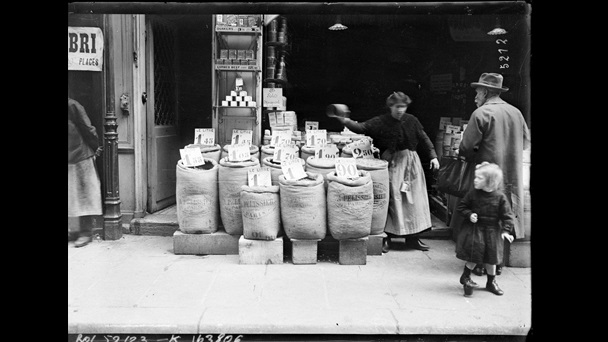 Photograph taken in August 1918 showing the high prices in Paris due to military expenditure.

Finance gave states a claim on real resources. The initial priority was for field guns, shells, and infantry weapons such as rifles and machine guns ; then for trench warfare equipment such as barbed wire, mortars, grenades, searchlights, and heavy artillery; by 1917-18 for newer devices such as aircraft, tanks, and gas shells. The prerequisites for armaments production were machinery, plant, raw materials, and labour. Whereas Germany could manufacture its own machine tools, the Allies imported them from the US. Some governments (notably Britain) established vast state-owned facilities, but the norm was to concentrate more specialized work in government arsenals while sub-contracting mass-produced items to private firms. Despite the Allied blockade, the Central Powers managed for most of the war to deliver enough steel and other metals and chemicals to their armaments industries, though only by depriving the civilian sector. On the Allied side Russia was largely self-sufficient, but Italy and France imported British coal and American steel and oil.

Labour supply was more complex. An indispensable contribution came from women, many of whom transferred from sectors such as textiles and domestic service rather than entering the labour market for the first time. In general Britain and France made greater use of women than did the Central Powers. However, women formed only part of the armaments workforce. In addition, both sides used army conscripts, who worked in factories under military discipline, and the French imported tens of thousands foreign and colonial employees. Moreover, hours were lengthened and safety standards relaxed, making munitions work not only arduous but also dangerous. By 1917-18 industrial unrest was increasing.

The huge growth of munitions output had ripple effects across the war economies: not least on agriculture and food supply. In the Central Powers, the blockade exacerbated shortages of fertiliser, tools, and lighting fuel. Allied farmers suffered less in these respects, but they too were deprived of draught animals and especially of labour. In most countries armies recruited disproportionately from the countryside. Many wartime family farms were run by the wives, assisted by their children and sometimes by migrant workers and prisoners of war. Although Britain and America increased wheat production in 1917-18, France and Germany’s 1917 harvests were less than half the pre-war average.

Returned local inhabitants cultivating a field in a devastated area 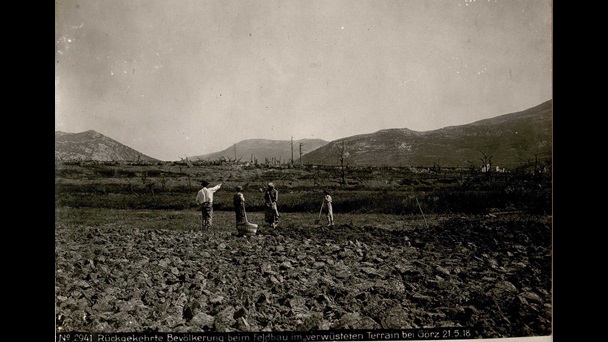 Taken in May 1918, this image shows the impact upon devastated areas as the returning local inhabitants attempt to cultivate the land.

Government policies exacerbated the situation. Fiscal policies stoked inflation, while selective price controls distorted output – thus wheat price caps encouraged growers to move away from cereals. Men doing military service commonly ate better than they had as civilians, whereas imports were drastically restricted. Consumers were exhorted to be frugal, and rationing came to Britain only in the last 12 months of the war, but in most Continental European countries it was adopted in some form by 1916. Rationing worked best as a means of redistribution when the absolute shortage was small (as in Britain). But if there was simply too little food available, official supplies were liable to be eclipsed by the black market, as notoriously occurred in Germany. Food shortages were fundamental to the erosion of pre-war consensus in Russia and in the Central Powers. That (despite great anxiety in the winter of 1917-18) the Western Allies continued to provision their armies and their civilians owed much to US supplies. This was not the least respect in which America’s contribution was essential to the outcome of the war.