'The Thought-Fox' by Ted Hughes: a close reading

Published in Ted Hughes’s first collection, ‘The Thought Fox’ is a poem as much about poetic inspiration as it is a vivid impression of the animal. Here, Professor Neil Roberts explores the poem’s use of allusion, imagery and rhyme.

‘The Thought-Fox’ has a special place among Ted Hughes’s early poems. Although it wasn’t the first poem in The Hawk in the Rain (Hughes’s first collection, published in 1957) he later moved it to first place in his Selected Poems. It is at least partly a poem about writing poetry – one might say about poetic inspiration. In his collection of radio talks, Poetry in the Making, he wrote that he composed it after writing nothing for a year. So we might see the fox as representing the renewal of the poet’s imaginative powers. We should be cautious about accepting everything Hughes writes about his own poetry. In Poetry in the Making he also writes that ‘The Thought-Fox’ was ‘the first “animal” poem I ever wrote’.[1] It wasn’t: he had written and published ‘The Jaguar’ the previous year. But this does show us that he thought the poem was especially important. When he read it in public he used to introduce it by telling the audience about a dream he had had two years before writing it, when studying English at Cambridge. He believed that academic study of literature stifled his creativity, and in the dream a burnt and bloody fox, the size of a man with human hands, entered his room, put a bloody hand on the essay he was writing and said, ‘Stop this – you are destroying us.’[2] When he wrote ‘The Thought-Fox’, he may not have been thinking about this dream at all, but it is significant that he later made the connection.

The Hawk in the Rain by Ted Hughes, Faber edition 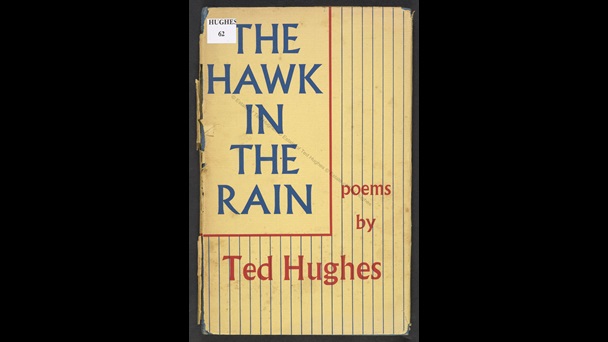 ‘The Thought-Fox’ was published in Ted Hughes’s first collection, The Hawk in the Rain, 1957.

Much later in life Hughes said that by the time he went to university he had constructed a 'sacred canon’ of the poets who were most important to him.[3] Three of these poets are echoed in the first stanza of ‘The Thought-Fox’:

I imagine this midnight moment's forest.
Something else is alive
Beside the clock's loneliness
And this blank page where my fingers move.

The most obvious echo is the ‘forest of the night’ in which William Blake’s ‘Tyger’ burns bright. In Hughes’s imaginary forest, too, lives a predatory animal, if a less awesome one from a human point of view. The most obvious poetic effect of the first line is the alliteration of the letter ‘m’, which echoes the most famous poem of a second of Hughes’s ‘sacred canon’, Gerard Manley Hopkins’s ‘The Windhover’: ‘I caught this morning morning’s minion’. Again the opening line introduces a symbolic animal, the kestrel whose ‘hurl and gliding’ embodies the rhythm of Hopkins’s poetry, and which in this case symbolises not merely the poetic imagination but Jesus Christ himself. The situation that Hughes evokes, the poet sitting alone at night, imagining what is going on outside his room, recalls that of Samuel Taylor Coleridge in one of his greatest poems, ‘Frost at Midnight’. Coleridge imagines the ‘secret ministry, / Unhelped by any wind’ of the frost, which contributes to the ‘solitude’ and ‘strange / And extreme silentness’ that favour his ‘Abstruser musings’. This is a classic image of the Romantic poet, deeply in tune with the natural world, but alone with his thoughts. Hughes embraces this image of the poet, not only in ‘The Thought-Fox’ but throughout his work. 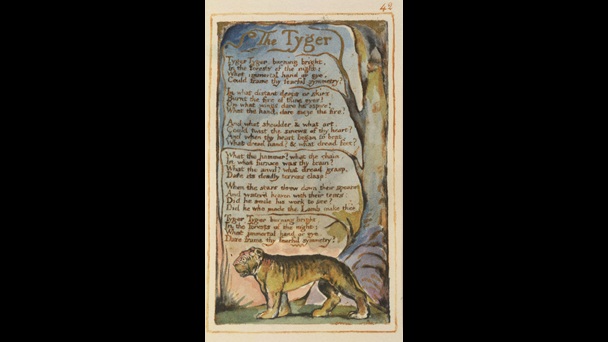 ‘The Tyger’ from William Blake’s Songs of Innocence and Experience.

‘Something else is alive’

The densely poetic opening line is followed by the simple statement, ‘Something else is alive’: the brevity of the line reinforces the uncertainty of the statement to create a sense of expectation and mystery: the first stirring of what will become the poem. Apart from this ‘Something’ the only things in the poet’s world are ‘the clock’s loneliness’ and the ‘blank page where my fingers move’. ‘The clock’s loneliness’ is a classic example of the ‘transferred epithet’: literally it is the poet, not the clock, who is lonely. But the ticking of the clock, emphasising second by second time passing and nothing happening, intensifies the loneliness. This is a special kind of loneliness: not so much the absence of other people as the poet’s alienation from his own creative powers: his ‘fingers move’ but the page remains blank. This feeling about the mechanical passage of time was powerfully expressed by another writer Hughes admired, D H Lawrence: ‘The terrible bondage of this tick-tack of time, this twitching of the hands of the clock, this eternal repetition of hours and days.’[4] Hughes is about to be rescued from the tyranny of clock-time and enter another realm:

Through the window I see no star:
Something more near
Though deeper within darkness
Is entering the loneliness.

The poem has a pattern of half-rhymes which, in every other stanza, alternate. In this stanza the rhymes form couplets. This combines with the brevity of the second line to make the half-rhyme ‘near’ come much sooner than expected, emphasise the nearness and echo the mystery of the poem’s similarly abbreviated second line. But it is a paradoxical nearness: nearer than a star but ‘deeper within darkness’. It is an inner depth, but unimaginably distant from the conscious mind. The animal emerging from such an inner depth and darkness is a trope that recurs in Hughes’s poetry: in, for example, ‘the dream / Darkness beneath night's darkness had freed, / That rose slowly towards me, watching’ of ‘Pike’ and the ‘depth darkness’ from which the ‘Ghost Crabs’ emerge.[5]

'Pike' by Ted Hughes, printed by the Gehenna Press 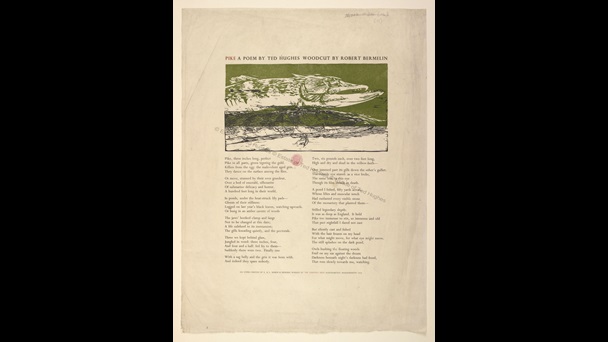 As in ‘The Thought-Fox’, ‘Pike’ uses the trope of the animal emerging from depth and darkness. This broadside edition was published in 1959.

This ‘Something’ is identified as a fox in the third stanza, and the following 12 lines give us a paradoxically vivid impression of the creature moving in the snowbound forest. Paradoxically because this brilliantly realised fox is at the same time something that inhabits the inner darkness of the poet’s mind. The fox emerges in parts: nose, eyes, prints, shadow. It is never described as a whole, but we as readers form a whole impression of it. The language of this section of the poem is perfectly accomplished: the way that ‘delicately’ the nose ‘touches twig, leaf’, the quietness and brevity of the repeated ‘t’ sound echoing the delicacy of the touch, and the omitted ‘and’ between ‘twig’ and ‘leaf’ gives us one moment swiftly following another, preparing for the ‘now, / And again now, and now, and now’ in which the poet’s time – and the reader’s – is no longer the empty time of the clock ticking but a mesmerised absorption in the present, such as one has when intently observing a wild animal. Perhaps the most brilliantly accomplished lines in the poem are:

warily a lame
Shadow lags by stump and in hollow
Of a body that is bold to come
Across clearings.

The fox is both wary and bold. This contradiction is handled by projecting the wariness on to the shadow. Hughes doesn’t explicitly say that the shadow is broken by the terrain over which the fox is passing – this is an unstated metaphor for the wariness. ‘Shadow lags by stump and in hollow’ has a heavy, lumbering, front-loaded rhythm that is transformed into the light, skipping rhythm of ‘Of a body that is bold to come’ and the leap across the stanza-break.

The fifth stanza is entirely devoted to the fox’s eye. This organ features perhaps more often than any other in Hughes’s poetry, especially about predatory animals. It is prominent in ‘The Hawk in the Rain’, ‘The Jaguar’, ‘Esther's Tomcat’, ‘Hawk Roosting’, ‘Cat and Mouse’, ‘Thrushes’ and ‘Pike’. The eye stands for the whole fox, ‘Coming about its own business’. This is what all wild animals are doing, regardless of the feelings humans might have about them, but this line’s deeper meaning concerns the fox’s symbolic role as representative of the poet’s hidden self, the self from which his poetry comes, the ‘deeper darkness’ that he can access only by escaping from the mechanical world of clock-time.

In these three stanzas the fox has been evoked by touch and vision (not, however, by sound – the only sound in the poem is the ticking of the clock) and the final stanza opens with a third sense, ‘a sudden sharp hot stink of fox’. Rarely do we come so close to a wild animal that we can smell it, so there is a startling intimacy about this line, and a reinforcement of the sense that the inner self is rarely accessed – as rarely as the stink of a fox. In the last two lines we are suddenly returned to the world of the ticking clock, as if from a waking dream. The final line, ‘The page is printed’, is the only one where Hughes’s judgement might be questioned. Apart from the two words at the start, ‘I imagine’, the poet has represented himself as entirely passive. Agency is handed over to the fox which ‘sets neat prints into the snow’ as if composing the poem. In Poetry in the Making he claims to have written the poem ‘in a few minutes’, reinforcing the Romantic notion (like Coleridge claiming to have transcribed ‘Kubla Khan’ from a dream) of the poet visited by inspiration. I suspect it was only the first draft that was written in a couple of minutes – all of his poems went through numerous drafts.[6] Nevertheless, the poem is a representation of such an inspired process. When the poet awakens, as it were, he finds the ‘page is printed’ – the ‘neat prints’ that the fox of his vision set into the snow are there in reality, rather as if he had woken from his dream of the burnt fox and found a bloody handprint on his essay. But the pun on the printed page and footprints of the fox is the one point at which the poem seems merely ‘clever’ and contrived – the only slight let-down in an otherwise totally convincing account of the marriage of inner and outer worlds.

[6] The only exceptions are the farming poems in Moortown Diary, which Hughes described as ‘casual journal notes’ that ‘excluded the poetic process’ and which were spoilt by attempts at improvement. For the most part these poems are unrevised.