An introduction to Betrayal

In Harold Pinter's Betrayal, an affair and its revelation are portrayed in reverse chronological order. William McEvoy explores how this reversal focuses our attention on the ways in which meaning and knowledge are constructed, and on the ability of language to hide as much as it reveals.

First performed on 15 November 1978 at the National Theatre in London, Betrayal was Harold Pinter’s seventh full-length play. Martin Esslin says that it ‘represents a major stylistic change, even something like a new beginning in Pinter’s development as a playwright’.[1] Up until that point, Pinter had been firmly associated with the 'Theatre of the Absurd', a term Esslin himself had coined to describe the work of writers such as Samuel Beckett and Eugene Ionesco which subverted realism and staged the irrational instead. In plays such as The Birthday Party (1958), The Caretaker (1960) and The Homecoming (1964), Pinter had offered audiences often working-class characters trapped in threatening scenarios – ‘comedies of menace’ as they were famously dubbed – in which motives were unexplained and violence simmered beneath the surface. 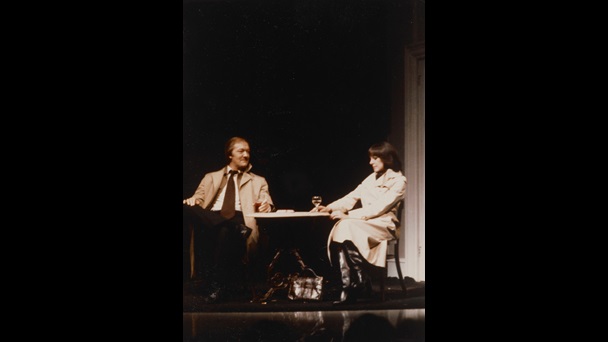 Betrayal represented a significant change in Pinter’s development as a dramatist. 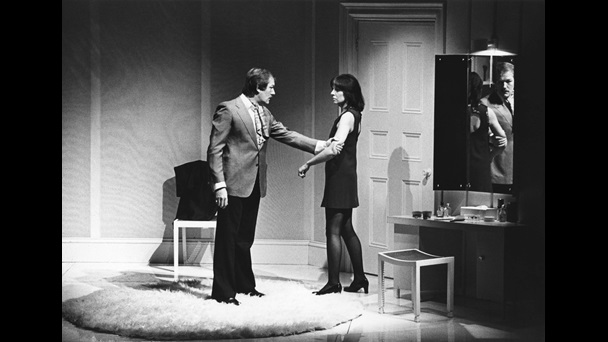 Michael Gambon as Jerry and Penelope Wilton as Emma.

From the 1970s onwards, with plays such as Old Times (1971), Pinter’s work shifted gear away from absurdist paranoia to tackle questions of memory and its unreliability. Often paired with Betrayal, Old Times features three characters, Deeley, Anna and Kate, negotiating different versions of their shared past. We cannot even be sure whether Anna is alive or dead, a ghost, a memory or a guilty projection of Kate’s or Deeley’s unconscious. The play marks the transition from the existential enigmas of Pinter’s earlier work to texts that deal with how perception is subjective and memory can be manipulated.

So what leads Esslin to call Betrayal a ‘major stylistic change’? In many ways, it is a much more conventional play than Pinter’s earlier works. It features a middle-class love-triangle in the form of two men and a woman, Jerry, his best friend Robert and Robert’s wife Emma, who are, as Robert Clyman puts it, ‘stylized variations on characters we already know from the more densely coded genre of realism’.[2] We learn about an extra-marital affair, watch the characters as they pursue it, lie about it and find out about it; and feel a strong undertow of regret and guilt as passions cool and the chilly realities of betrayal leave their imprint.

What Esslin is alerting us to is the way Betrayal completely transforms our role as readers and spectators by recounting the events largely in reverse chronological order, starting with the end of the affair between Jerry and Emma, and taking us, over the course of nine scenes, back to its beginning. When we first see Jerry and Emma in Scene 1, set in a pub in 1977, we quickly note their reticence about speaking, and the way their words mirror one another:

Jerry Well.
Emma How are you?
Jerry All right.
Emma You look well.
Jerry Well, I’m not all that well, really.[3]

The word ‘well’ occurs four times in five lines, as if they are looking for ways to open communication but have to resort to a repeated word to fill the gap. As the scene continues, the two characters enter into a complex game of tentative self-exposure, testing each other’s emotional boundaries, not sure but wanting to know how the other feels without betraying their own vulnerability to rejection or indifference.

Typescript draft of Betrayal by Harold Pinter with revisions 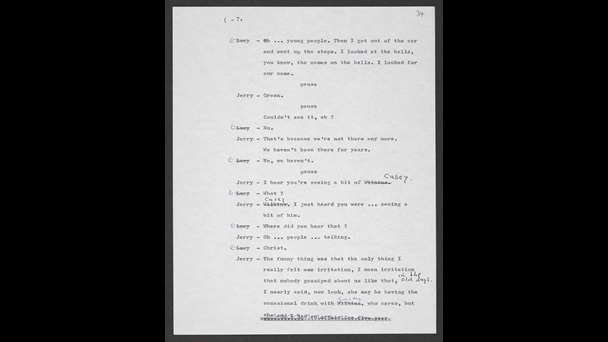 An excerpt from scene one of Betrayal in which Jerry and Emma (‘Lucy’ in this draft) reflect on their affair. Emma admits she is seeing Casey.

The play progresses in a series of snapshots from the previous nine years, its overall arc taking us back to 1968, when the affair began. The reverse chronology is not smooth though: three scenes take us slightly forward a month or two in a specific year, while the time gap between the scenes sometimes extends to three years (as in the final Scenes, 8 and 9). The overall effect is a rhythm of crisis and dilation and a temporal instability as the past is reconstructed for us. What emerges is a sense that all of the characters have betrayed each other: husbands have betrayed wives and vice versa, friends have betrayed friends, by conspiracy or omission, sometimes thoughtlessly, sometimes out of love.

In Enoch Brater’s words, in Betrayal, ‘[i]t is not so much what we know but when we know it that is responsible for the real tension’.[4] More than this, the play is about how our knowledge exceeds, equates to or lags behind the characters’. As spectators, we observe scenes throughout with the irrealistic foreknowledge of how things will end. Rarely has dramatic irony, where the audience know more than the characters, been used to such devastating effect.

Manuscript notes and draft pages for Betrayal by Harold Pinter 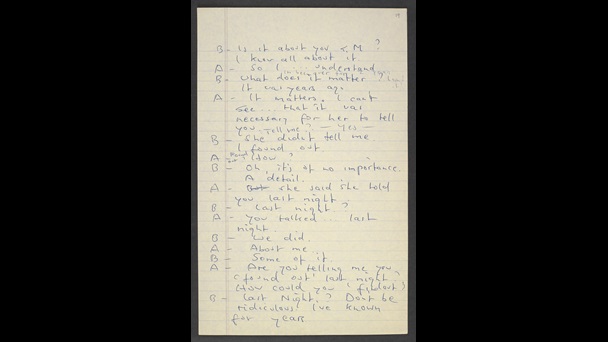 The tension in Betrayal is created not by what we know, but when we find out. In this scene, Robert reveals that he learned of the affair between his wife and best friend years ago.

Arguably then, the play is as much about our role as readers as it is about themes such as friendship, 'homosociality' (i.e. relationships between men, often mediated by their relationships with women) and sexual power games. Indeed, for Clyman, the time-reversal ‘dispels the illusion of real life’[5] altogether. Instead, it focusses our attention on how ‘certain scenes have been carefully chosen for presentation’.[6] In other words, despite its realist frame, Betrayal is meta-theatrical and meta-linguistic, making us think about how meaning is constructed or fabricated and about how the very same words can mean entirely different things to different people depending on what pre-knowledge they bring to a situation. We end up focussing less on what the characters do or say, on the moral rights and wrongs of their actions, and concentrate instead on the power of language to confess or conceal, to seduce or to wound, to threaten or to intimidate.

One upshot of this shift of focus onto the plane of language is that the characters no longer seem like real people but are more like ‘vehicles in a kind of information game’.[7] Pinter has told us how their story ends, so we focus instead on decoding their double-meanings, where everyday exchanges are tense with subtext because we know what happens in the future. In Scene 3, set in 1975, when Jerry says to Emma ‘I don’t think we don’t love each other’,[8] the double negative claims our attention because we have just witnessed the frostiness of their relationship two years down the line. Even more striking is the way Pinter is able to generate alarm via language which, out of context, seems perfectly mundane. All Jerry has to do at the end of Scene 7 is ask Robert ‘How is Emma?’[9] and because we know Robert has just found out about Jerry’s affair with his wife but Jerry isn’t aware of this (and won’t be for another four years), the question sends a jolt through us.

The characters’ dialogue is full of digressions, evasions and contradictions, to the extent that the drama of this play occurs at the micro-level of syntax, through subtext, ellipses and pauses, rather than at the macro-level of plot revelations, climaxes and resolutions.

So often, below the word spoken, is the thing known and unspoken. My characters tell me so much and no more … most of the time we’re inexpressive, giving little away, unreliable, elusive, evasive, obstructive, unwilling. But it’s out of these attributes that a language arises. A language, I repeat, where under what is said, another thing is being said.[10]

Pinter’s Betrayal is full of this kind of subtext, and he has given us the key with which to decode it. It is a play which teaches us that words have histories, even silences have histories, and to be attuned to these. It leads us to think about dialogue in relation to intersubjectivity. What we say – and how we say it – is shaped by how we expect our words will be interpreted, whether we think we will be interrupted, whether we want the other person to speak first and so on. For Pinter, a listener’s actions, a flinch, a sigh, a gesture, will have an impact on a speaker’s words, and in Betrayal, the director’s great challenge is to capture how Pinter’s elliptical dialogue registers the complex verbal and non-verbal cues characters give one another about their emotional states.

Manuscript notes and draft pages for Betrayal by Harold Pinter 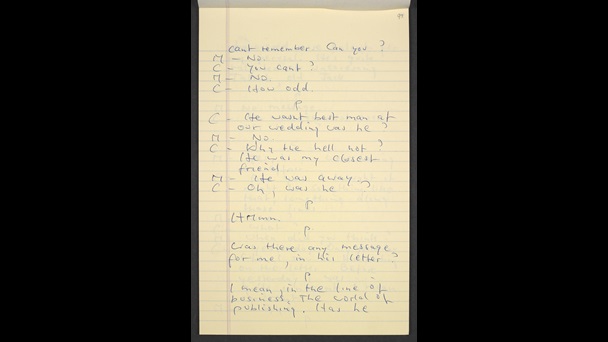 Peter Hall, who directed Michael Gambon, Penelope Wilton and Daniel Massey in the 1978 premiere of the play, has said that Pinter’s writing ‘allows him to explore the instinctive hostilities between human beings. They fight duels not with swords, but with words and silences’.[11] But this is only part of the story in Betrayal. The play reverses beginnings and endings. The first scene ends with Emma’s words ‘It’s all all over’,[12] though our understanding at that stage of what lies behind the characters’ tongue-tied zigzagging between intimacy and defensiveness is only just starting. The characters’ hostility is shown to be far from instinctive but is revealed instead to be a compound of love, loss, regret and vulnerability. Pinter’s great achievement in Betrayal is to make a detective story out of a play whose ending we know from the start. Instead of being absorbed by the events of the narrative, we become calculating analysers of language, complicit with the characters’ lies, shocked by our perception of the way banal words can mask such powerful emotions and contain such painful ironies.

Typescript draft of Betrayal by Harold Pinter with revisions 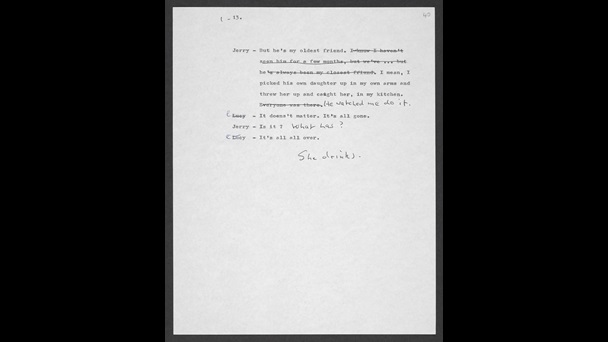 The first scene of Betrayal ends with Emma’s words ‘It’s all all over’. Our understanding at that stage of what lies behind the characters’ tongue-tied zigzagging between intimacy and defensiveness is only just starting.