An introduction to Birthday Letters

Professor Neil Roberts explores the development of Birthday Letters, Ted Hughes’s 1998 poetry collection that was written over a period of 25 years and concerns Hughes’s relationship with the American poet Sylvia Plath.

Birthday Letters is a very unusual, perhaps unique collection of poetry. It was written over a period of at least 25 years. During that period its subject – his relationship with Sylvia Plath – had been the theme of five biographies of Plath, most of them hostile to Ted Hughes, and of her own writing, directly in her journals and indirectly in her poetry. He had tested the water over the years with single poems published in magazines, and then eight of them in his New Selected Poems (1995), but these had hardly been noticed. To gauge the shock of the publication of Birthday Letters consider that in all Hughes's previous collections, Sylvia Plath is explicitly mentioned only once, in the poem 'Heptonstall Cemetery' in Remains of Elmet (1979). For most of his career Hughes had adhered to a principle of impersonality in poetry. He despised the direct use of autobiographical material, and believed that to make poetry of any value experience needed to be imaginatively transformed. But he was also inhibited by the fact that during the 1970s the work, life and death of Sylvia Plath were co-opted into a feminist narrative of masculine oppression that cast him as the villain and had no time for the subtleties of his relationship with Sylvia. How could he publish sensitive, self-searching and honest poetry about that relationship in such a fevered polemical context? At the end of his life, however, he came to believe that his creative development, and even his mental and physical health, had been damaged by his failure to deal much earlier with this central fact in his life. 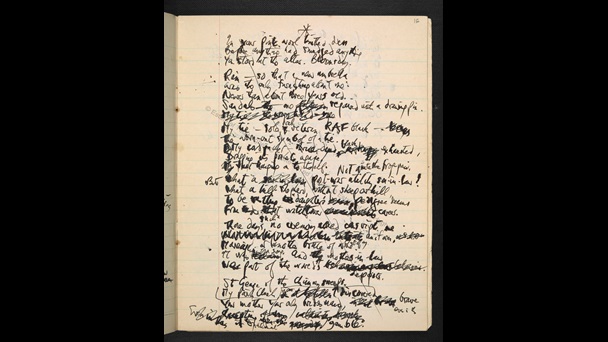 Early heavily revised draft of ‘Pink Wool Knitted Dress’, a poem about Ted Hughes’s and Sylvia Plath’s wedding day. Although undated, the Birthday Letters manuscripts reveal that Hughes was working on the collection over a long period of time.

Hughes's papers held at the British Library show that not only was he working on the collection for a very long period, he also extensively revised the poems. After publishing them he described them as 'so raw, so vulnerable, so unprocessed, so naive, so self-exposing & unguarded, so without any of the niceties that any poetry workshop student could have helped me to'.[1] Two decades earlier he had published a collection of poems, or what he called 'improvised verses', Moortown Diary, written by a 'method that excludes the poetic process'.[2] But Birthday Letters is very different from this. The manuscripts of Moortown Diary show that Hughes hardly revised these poems at all.[3] In the case of Birthday Letters, as you can see from the examples on the Discovering Literature website, he made numerous drafts with many alterations. So although Ted Hughes, one of the greatest poets of the 20th century, was constantly revising these poems, they still lacked 'any of the niceties that any poetry workshop student could have helped [him] to'. This is surprising to say the least.

When we look at the drafts of most of Hughes's poems there is a progression, often from quite crude notes to a more aesthetically satisfying outcome. To take an extreme example, an early draft of one of his greatest poems, 'Skylarks', begins with these uninspired lines:

For me the trouble about skylarks
Is that I can’t get to like them.
Somebody else will have to write their poems
I can’t. I’ve tried & I can’t.[4]

The poem published in Wodwo begins much more memorably:

The lark begins to go up
Like a warning
As if the globe were uneasy.[5]

This is not the case, or is much less the case, with Birthday Letters. The revisions seem to have a different motive. In one of the drafts of 'St Botolph's', the poem about Hughes and Plath's first meeting, he wrote:

To get a better look at each other
We re-materialised
In the store-room, where the crates of drink
Were hoarded from the rabble.
Behind the door, I poured more brandy We drank.
I kissed you. Whether you were drunk
Or concentrated for a masterpiece, suddenly
You fastened to me, your limbs steely,
Like a trap. Our kiss developed
Till my left cheek was in your teeth
And your screwed-up ball-face of joy
Bit & held with all your strength. I broke free,
I was laughing & you were laughing,
People were barging in.[6] 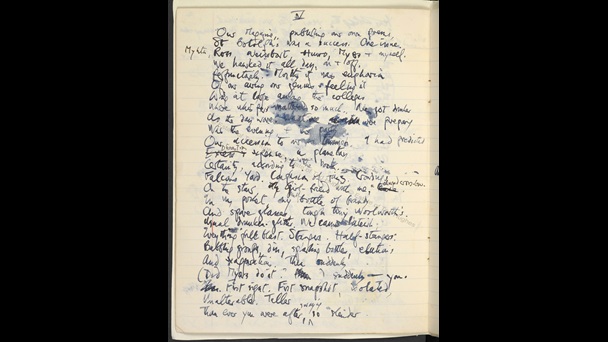 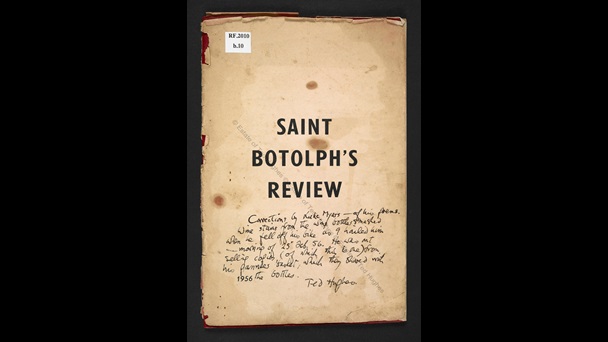 This is a much more circumstantial account than in the published poem, where the actual physical encounter is skipped over with the sentence, 'I remember / Little from the rest of that evening' and only indicated by the tooth-marks that Hughes finds on his face afterwards.[7] The encounter is famous from Plath's own version of it, written in her journal the day after, in which 'when he kissed my neck I bit him long and hard on the cheek'.[8] This draft's description of the bite as the development of a kiss casts quite a different light on it: the whole encounter is more erotic and less aggressive than in Plath's version. It is an occasion of joy and laughter, not of menace and anguish as it is in the journal.

Why Hughes omitted this passage it is hard to say, but it cannot have been for aesthetic reasons. The episode in the published poem is dominated not by the physical encounter but by his impression of her:

I see you there, clearer, more real
Than in any of the years in its shadow –
As if I saw you that once, then never again.
The loose fall of hair – that floppy curtain
Over your face, over your scar. And your face
A rubbery ball of joy
Round the African-lipped, laughing, thickly
Crimson-painted mouth. And your eyes
Squeezed in your face, a crush of diamonds,
Incredibly bright, bright as a crush of tears
That might have been tears of joy, a squeeze of joy.
You meant to knock me out
With your vivacity.

Many of the most poignant moments in Birthday Letters are vivid accounts, like this one, of Plath's distinctive appearance and personality, conveying to the reader exactly why Hughes fell in love with her. It may have been that, for him, this was more important than a circumstantial account of what they did together. 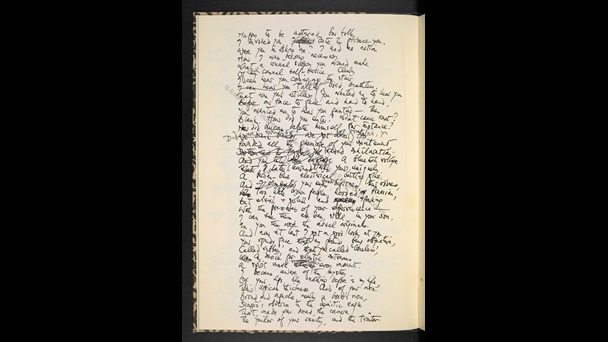 ‘A blueish voltage / That I later learned I learned was yours uniquely’: From a later manuscript draft of ‘18 Rugby St’ by Ted Hughes.

Manuscript draft of 'Fingers' by Ted Hughes, from the Birthday Letters notebooks 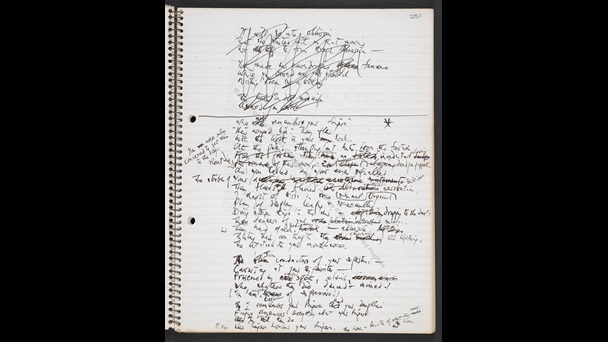 This has a bearing on the fact that although the poems are organised in a more or less chronological sequence, the book is very unsatisfactory as a narrative. The poems were not written as a narrative, but as communications with the spirit of Plath. All but two of them are addressed to her, and the effect is of a private conversation that we as readers are overhearing. In this way Hughes is able to sidestep the public and polemical context that made it so difficult for him to write publicly about their marriage. Especially towards the end any semblance of narrative breaks down: after 'Dreamers', the poem about his falling in love with Assia Wevill, only 'Robbing Myself' (a poignant account of his driving through snow from London to their deserted Devon house to bring back potatoes and apples for her) and 'The Inscription' (about one of their last meetings) is in any way circumstantial.

Birthday Letters was selected from a large body of writing, much of which remains unpublished. In the same year, Hughes brought out a smaller selection in an expensive limited edition called Howls and Whispers. One of these poems, 'The Offers', about three occasions on which Hughes is visited by Plath's ghost, is by general agreement as good as, if not better than, any of the ones published in Birthday Letters.[9] He also wrote poems that deal more directly than anything in Birthday Letters with the period leading up to and including Plath's death. One of these, 'Last Letter', imagines Plath on the night of her death, repeatedly walking through snow to a phone box trying to contact him, while he was away from his flat with another woman. 'Last Letter' was published in the New Statesman in 2010.[10] It is an almost unbearably painful piece of writing which testifies more than anything else in the public realm to Hughes's feelings of guilt. A draft document in the British Library titled 'Final Arrangement?' includes this poem. Birthday Letters would have been even more of a sensation if he had included it. Perhaps he decided it needed more work. More likely, he felt that this was an exposure too far. Its existence is further evidence that Birthday Letters should be read not as a finished narrative but as an open-ended series of meditations.

[3] These manuscripts are in the library of Emory University, Atlanta, Georgia.