An introduction to Happy Days

The main character in Happy Days is a middle-aged woman inexplicably buried in a mound, first to her waist and then to her neck. William McEvoy discusses how Beckett uses this character and her predicament to explore a recurring interest in his work: the failings of bodies and language.

In a recent book, Anna McMullan notes that ‘Beckett’s distorted and dismembered bodies have become part of the global cultural imaginary of the 21st century’.[1] When we think of Beckett’s theatre, the images that come to mind are bodies in pain, immobilised, paralysed, trapped or incomplete. In his early plays, physical disability is more tangible, from the open wound on Lucky’s neck and Pozzo’s blindness in Waiting for Godot to Hamm’s paralysis and blindness in Endgame. When Harold Pinter played Krapp in Krapp’s Last Tape in his last public performance in 2006, he acted from his wheelchair, bringing his own disability as a result of cancer to his role as a character who listens to past versions of himself from the vantage point of old age. In Beckett’s later plays, the distortion of the body goes from physical to metaphorical: heads float, mouths utter words in darkness, voices echo through the texts incorporeally.

Happy Days was Beckett’s sixth play, begun in August–October 1960 and completed in May 1961. Writing to Alan Schneider, who directed its first production in New York in 1961, Beckett said: ‘It’s a much more difficult job I’ve given you here than any so far – all poised on a razor-edge and no breathers anywhere’.[2] The play revolves around a central character, Winnie, a woman in her 50s. Trapped in a mound up to her waist in Act 1, for no explicable reason, we find her buried up to her neck in Act 2. She is alone most of the time, despite the presence of her partner Willie buried behind her in a hole. Describing a painting by Jack Yeats in 1937 – painting and music were crucial influences on him – Beckett speaks about its depiction of ‘two irreducible singlenesses & the impassable immensity between [them]’,[3] an apt description of Winnie’s experience in the play. We follow her as she is abruptly awoken in the morning by a loud ringing noise, typical of Beckett’s estrangement of the everyday in evoking associations with prison cells or school bells rather than morning alarms. So it begins, almost like clockwork: Winnie’s stream of words cataloguing the items in her bag as she removes them one by one, peering myopically at the printed words on her toothbrush, digressing into reflections on language and meaning, recalling half-forgotten quotations from her schooldays and shifting into memories of early sexual encounters or traumatic events from childhood, voiced out loud in the hope that ‘something of this is being heard’.[4] As happens in Waiting for Godot, Act 2 contains minor changes with a major impact: her body is buried further, with only her head remaining visible, and the ongoing effects of age and immobility become terrifyingly apparent. Fiona Shaw as Winnie, buried up to her waist in the first act of Happy Days. 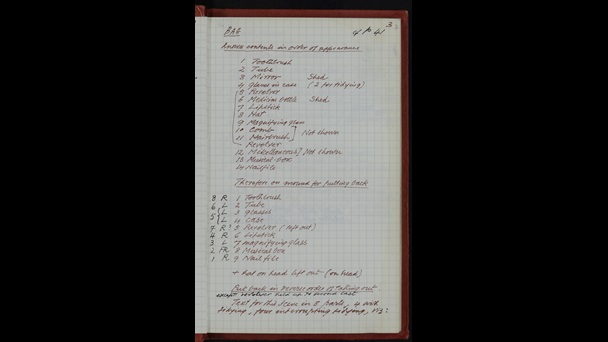 In this production notebook, Beckett lists the 14 contents of Winnie’s handbag, including a toothbrush, mirror and revolver, in order of their appearance in the play.

What is hidden, withheld, unseeable

Beckett himself was uncertain about whether his new piece of writing could even be called a play. in a letter dated 15 September 1961, he wrote to Alan Schneider: ‘I am interested in the “professional” [critical] reaction – in the sense that it will help me decide whether this is really a dramatic text or a complete aberration and whether there is justification for trying to push forward this kind of theatre’.[5] What he had been sure of, from very early in his career, was the need to push boundaries , talking in his dialogues with George Duthuit about being ‘weary of pretending to be able, of being able, of doing a little better the same old thing, of going a little further along a dreary road’.[6]

McMullan argues that Happy Days ‘draws attention to the limits of the visible, what is hidden, withheld, unseeable, or unreadable from the audience’s perspective’.[7] As Winnie’s body disappears, her words become more crucial but also more hesitant, elliptical and syntactically disjointed, leading one critic to call her ‘an interrupted being’. A central paradox of much of Beckett’s work is contained in Winnie’s question in Act 2, ‘What is that unforgettable line?’.[9] Typical of Beckett’s sharp humour, the oxymoronic phrase warns us that memory can no longer be relied upon. Language, even great poetry once learnt by heart, breaks down, its reassuring certainties no longer accessible. Winnie is terrified of ‘forgetting her classics’[10] in a text echoing with half-remembered quotations from Shakespeare, Milton, Keats, Herrick, Gray and others. Their designation as ‘unforgettable’ survives much longer than their actual content.

When critic Martin Esslin coined the term ‘Theatre of the Absurd’ (‘absurd’ literally meaning ‘out of harmony’), Beckett’s work was the first to feature in his 1962 book on the topic. Esslin identified the importance of powerful visual images in this new style of theatre, but in fact, it is the complex interplay between words and visual images that makes Beckett’s pieces so compelling. Beckett’s plays are frequently concerned with the limitations of language, the problems of theatre and the challenges of writing. Characters are often caught up in repetition, a key feature of Beckett’s writing at a syntactical and structural level, representing the deadening impact of habit, the recurrence of trauma, or the recourse to familiar and reassuring words or phrases in the face of annihilation. Author-substitutes and proxies populate his work, from the blind Hamm asking Clov to describe the outside world in Endgame, to the ageing Krapp attempting to compose old tape recordings of his past selves into some form of meaningful narrative in Krapp’s Last Tape. Winnie too is waiting for the moment when she can author herself, when she can sing her song that signifies ‘I’, but that moment of self-expression is bounded by anxiety. She constantly addresses herself in the third person, lamenting how ‘words fail’.[11] Typical of Beckett’s temporal jumps, Winnie moves between tenses, the present constantly sucked into the past, or projected forward in the future perfect. Happy Days is a play of failed reciprocity in which words find no auditor, leaving Winnie asking at the end of the play ‘what’s it mean? What’s it meant to mean?’ without the possibility of an answer.[12] 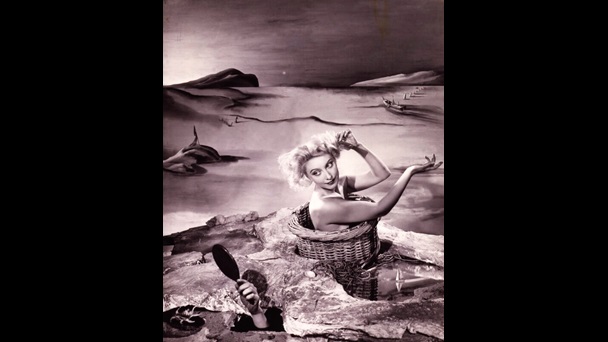 James Knowlson has suggested that Beckett’s striking visual image of the half-buried woman was influenced by the photography of Angus McBean. 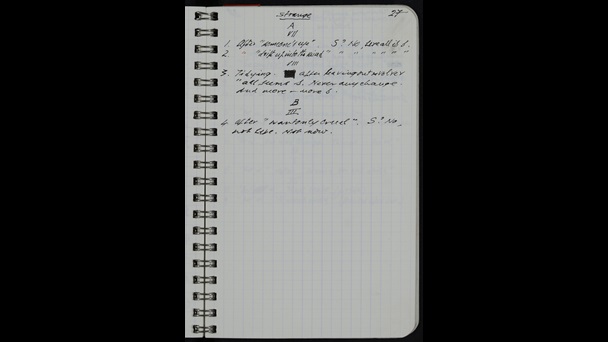 Notebook used by Beckett when directing the 1979 Royal Court production of Happy Days, starring Billie Whitelaw. In rehearsals in Berlin, Beckett told Frau Schultz that what is most striking about Winnie’s situation is the strangeness, commenting ‘“Here everything is strange”’.

Ironically, the great achievement of Beckett’s work is the suspension of the very question ‘what does it mean?’ In a letter written in October 1961, soon after he completed Happy Days, Beckett notes ‘I know creatures are supposed to have no secrets from their authors, but I’m afraid mine for me have little else’.[13] Instead of trying to explain or interpret Winnie, Beckett wants us to listen to her – in a way that Willie never really does – to the rhythms, repetitions and interruptions of her dialogue, and to really see her, to observe her stasis and vulnerability, hence the immobilisation of her body. As early as 1930, talking about Proust, Beckett famously noted the challenge for the writer to find ‘the expression that there is nothing to express, nothing with which to express, nothing from which to express, no power to express, no desire to express, together with the obligation to express’.[14] Winnie’s words do not express meaning but enact its convoluted, slow implosion; instead of articulating thoughts and ideas, they become disarticulated as Beckett’s syntax registers the tensions and torsions of failing expression.

This sense of language as a deadening force of habit, embodying the failure of expression, presents a real challenge to actors performing in Beckett’s plays. Giving written advice to Alan Schneider when he was directing Happy Days in August 1961, Beckett said he was ‘asking for verbal monotony … vocal tranquillity and transparency’.[15] When Billie Whitelaw played Winnie in 1979, she was actually directed by Beckett and confessed at one point that ‘she could no longer endure the strain of Sam’s obsession with the pronunciation, tone and emphasis of each syllable of every word in the long text’.[16] For Whitelaw, Beckett wanted the actor to become a neutral vehicle for the transmission of the text, much like the tape-recording in Krapp’s Last Tape. Discussing Beckett’s later monologue Not I, Whitelaw said ‘if you allow the words to breathe through your body, if you become a conduit, something magical may happen.[17] Beckett called for a delivery of the text that was colourless, transparent, inexpressive, precise and ‘mild’. 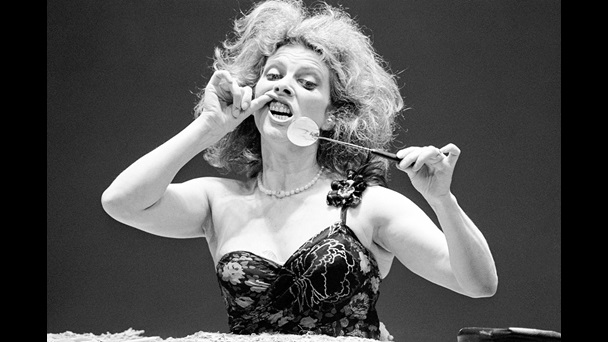 Beckett’s production notebooks reveal his precise, meticulous approach to directing his own work. Here, he lists each moment when Winnie smiles with a ‘Happy expression’.

There have been several landmark productions of Happy Days since its premiere in 1961. Unlike his earlier plays Waiting for Godot and Endgame, which were written in French, Happy Days was written in English, the French translation by its author published in 1963. Madeleine Renaud is credited with establishing the play’s reputation in Europe with her touring production from 1963 onwards, of which reviewer Bernard Poirot-Delpech said: ‘one syllable is enough to suggest all the doubts of the mind, one intonation all the terrors of the heart, one silence all the consolations of language’.[18] Peggy Ashcroft, Billie Whitelaw, Fiona Shaw and Juliet Stevenson have all played Winnie to significant acclaim. 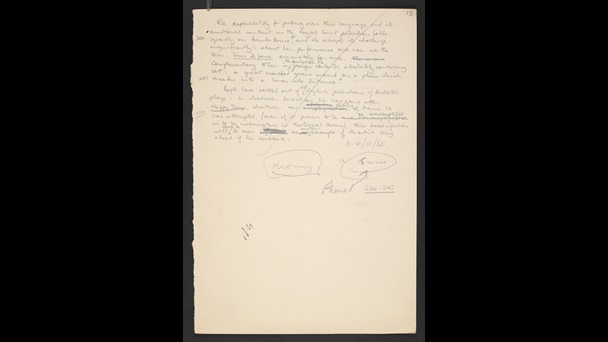 In this review of the Royal Court Theatre’s 1962 production of Happy Days, B S Johnson praises Brenda Bruce, whom he describes as a ‘tour de force’ for her performance as Winnie.

Usage terms © Estate of B S Johnson. Except as otherwise permitted by your national copyright laws this material may not be copied or distributed further.

Fiona Shaw, who played Winnie in 2007, said that the play was about Winnie’s ‘self-preservatory illusions’,[19] and argued that ‘Beckett takes us beyond language to silence, the silence we all will and must face’.[20] This aptly reflects the trajectory of Beckett’s theatre work, moving from the verbal richness of earlier plays such as Endgame through the disjointed stutterings of Not I to the wordlessness of Breath and Quad, a piece that involves four performers walking around and across a square in exhaustive permutations. Shaw’s comment helps us see Beckett’s work as a meditation on the obligation to endure in the face of death, not just our own, but that of others; grief echoes through his work, this more than anything bordering on the inexpressible. 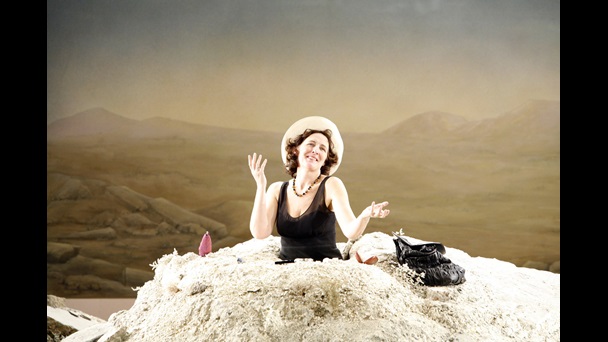 Fiona Shaw, who played Winnie in 2007, has argued that ‘Beckett takes us beyond language to silence, the silence we all will and must face’.

Beckett’s work in plays such as Happy Days constantly lives up to the challenge he sets the artist to ‘turn away from the plane of the feasible’.[21] ‘Winnie’, says Winnie, addressing herself, ‘you are changeless’,[22] and in the way she embodies the failings of memory, the immobilisation of the ageing body, the pleasures of repetition, the reassurance of habit, the company of objects, the desire to be heard, the pessimism of abstraction and the optimism of the material everyday, she exemplifies many of Beckett’s unforgettable characters who do, indeed, play their part in the new century’s cultural imaginary.