Katherine Mansfield was a pioneer of the modern short story. Here Stephanie Forward provides close readings of three short stories from Mansfield’s celebrated 1922 collection, The Garden Party and Other Stories.

The Garden Party and Other Stories was published in 1922, the year before Katherine Mansfield’s untimely death from tuberculosis. An anonymous detractor in the English Review declared it to be ‘cruel, passionless and cynical’; however, in July 1922 Robert Littell acknowledged Mansfield’s ‘genius’, enthusing about her ability to evoke moods and feelings: ‘She is a connoisseur of the ripples that mean so much more than waves, a collector of little emotions caught on the wing, never pinned or bottled in her pages, but kept alive there in all their fragile iridescent colours’.[1]

Recently, Claire Tomalin has described Mansfield as ‘an original, both in her technique as a writer and the way she chose to live her life; a modernist, an innovator, an experimenter’.[2] Other notable critics have assessed her contribution to literary modernism,[3] and Clare Hanson has also argued persuasively that the central concerns of Mansfield’s fiction ‘resonate powerfully with the landscape opened up by psychology and psychoanalysis’.[4]

The Garden Party and Other Stories by Katherine Mansfield 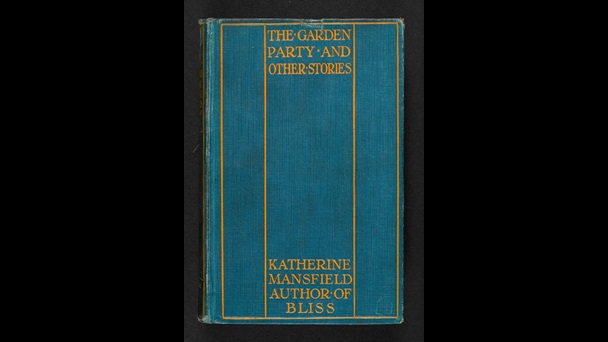 Front cover to the first edition of The Garden Party and Other Stories, 1922.

Modernist authors distanced themselves from their Victorian and Edwardian predecessors. Repudiating traditional third-person omniscient narration, they preferred to represent characters through their shifting thoughts, memories and sensations. Mansfield’s stories were regarded as the first in the English language to bear the influence of Chekhov. She also credited visual art’s impact on her prose technique, declaring that Vincent Van Gogh’s paintings ‘taught me something about writing which was queer – a kind of freedom – or rather, a shaking free’. Furthermore Mansfield compared her story ‘Miss Brill’ to a piece of music, explaining in a letter of 17 January 1921: ‘I chose not only the length of every sentence, but even the sound of every sentence. I chose the rise and fall of every paragraph to fit her.’ One art form could be used to inspire another, as Gerri Kimber has explained: Mansfield’s stories ‘grow from pieces of music, pictures, poems, and architectural details. Cinema techniques are transposed back into writing, theatrical monologues and dialogues are re-mediatised as prose’.[5] 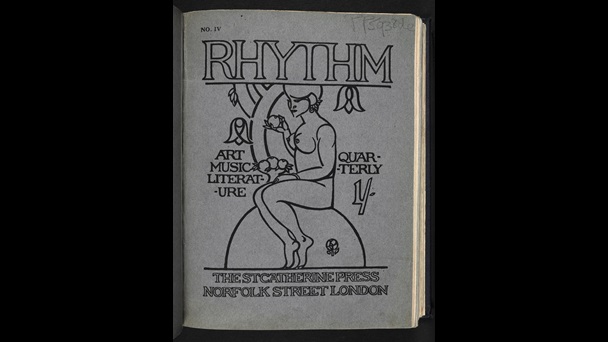 Usage terms Design by J D Fergusson: © Courtesy of Perth Museum and Art Gallery, Perth and Kinross Council. Except as otherwise permitted by your national copyright laws this material may not be copied or distributed further.

Mansfield’s journal entry for January 1916 states: ‘The plots of my stories leave me perfectly cold.’ They tend to begin at the heart of a situation, without preamble (although flashbacks and reflection feature), and frequently they end abruptly. Primarily, Mansfield is concerned with the psychology of her characters, many of whom are isolated, frustrated and disillusioned. She moves between them, using focalisation and free indirect speech to communicate their thoughts. Often they feel that they have ‘two selves’ and, repeatedly, there is a sense of wasted potential and a yearning for escape.

The short story is an exacting form, with no room for convoluted explanations, lengthy descriptions and superfluous dialogue. In a letter Mansfield stated that, ideally, ‘there mustn’t be one single word out of place, or one word that can be taken out’. Such condensation requires skilful use of implications and also omission. Writing to Lady Ottoline Morrell, she contemplated how nuances of emotion might be captured: ‘how are we to convey these overtones, half tones, quarter tones, these hesitations, doubts, beginnings, if we go at them directly?’ Mansfield transmitted details obliquely, via allusion and suggestion, seemingly ‘trivial’ incidents and ‘random’ associations.

Certain images recur: the sea and ships; fruits, trees, plants, leaves, flowers; birds and mirrors. She draws unexpected comparisons, achieved through personification and unusual metaphors and similes. For instance, ‘Life of Ma Parker’ captures the loneliness of a brave old woman who has endured great hardship and multiple bereavements; she has coped stoically, until the loss of her beloved young grandson proves to be the final straw. The view from her employer’s ‘smudgy little window’ reveals to Ma Parker ‘an immense expanse of sad-looking sky, and whenever there were clouds they looked very worn, old clouds, frayed at the edges, with holes in them, or dark stains like tea’.

The experience of an epiphany is a key aspect of modernist writing: Virginia Woolf and James Joyce also tried to articulate flashes of realisation, revelation, insight and understanding. Woolf described these as ‘moments of being’. Epiphanies are experienced in many of Mansfield’s stories, although they do not necessarily lead to complete comprehension. Rather there is awareness, intimation and possibly just a glimpse of something beyond a character’s everyday perceptions.

‘The Daughters of the Late Colonel’

Two sisters, Josephine and Constantia, try to come to terms with the loss of their father. It soon becomes apparent that he dominated them, and in death he continues to exert control. Josephine ‘heard him absolutely roaring’. The symbolism conveys patriarchal authority, with references to the Colonel’s stick and top-hat. His daughters are so much in thrall that they imagine he is still in the bed, in the chest of drawers, or poised behind the door-handle ‘ready to spring’. Josephine and Constantia are child-like in their attitudes and behaviour; barely able to make decisions for themselves.

The Garden Party and Other Stories by Katherine Mansfield 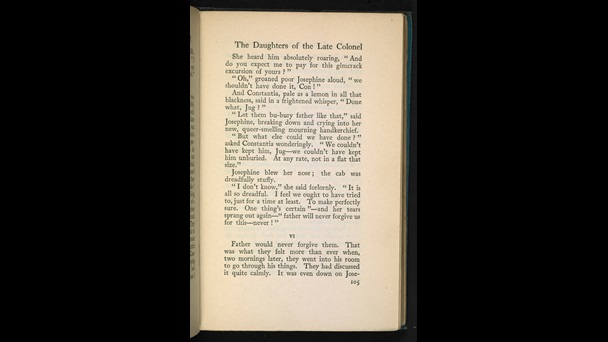 The sisters struggling to overcome their father’s control in ‘The Daughters of the Late Colonel’, 1922.

Originally, Mansfield intended to call the story ‘The Non-Compounders’. In her teens she had travelled to Britain from her home in Wellington, New Zealand, to study at Queen’s College, London, and the term ‘non-compounders’ was applied to students who attended classes without being officially registered. It is applicable to Josephine and Constantia because they are members of society yet are marginalised figures within it.

Towards the end there is a glimmer of hope, triggered by a seemingly trivial occurrence. The sisters have been accustomed to bribe the organ-grinder to go away, as his noise distressed their father; but it strikes them that they will never have to resort to such behaviour again. At this precise moment the sun – almost tentatively – ventures into the room: ‘On the Indian carpet there fell a square of sunlight, pale red; it came and went and came – and stayed, deepened – until it shone almost golden’. Simultaneously the barrel-organ scatters ‘[a] perfect fountain of bubbling notes’. As Constantia looks at her favourite Buddha on the mantelpiece, his smile suggests that he knows a special secret; something that Constantia might be on the verge of grasping. ‘The thieving sun’ touches Josephine, too; then it retreats behind a cloud and the story ends suddenly.

It is widely regarded as one of Mansfield’s finest works, and generations of readers have appreciated its delightful comic touches: for example, the hilarious account of the women urging their nephew Cyril to talk to his grandfather about meringues. Nevertheless, the reader is left with a lingering sense of anxiety. What will become of Josephine and Constantia? Will they ever be able to enjoy meaningful lives? Claire Tomalin, after comparing them to ‘beached whales’, stresses that Mansfield does not tell the story ‘satirically at the expense of the sisters’. Rather, she writes affectionately: ‘and so quietly, without pity or emphasis, that it is quite possible to enjoy its jokes about early twentieth-century genteel womanhood and miss the devastating nature of what it is saying’.[6] Indeed, Mansfield did voice her concern about people’s failure to assimilate her point. Thomas Hardy admired the piece, yet invited a sequel. Mansfield found this reaction strange, and told her friend, Dorothy Brett: ‘I put my all into that story and hardly anyone saw what I was getting at. Even dear old Hardy told me to write more about those sisters. As if there was any more to say!’ In a letter to the writer William Gerhardi she elaborated:

All was meant, of course, to lead up to that last paragraph, when my two flowerless ones turned with that timid gesture, to the sun. “Perhaps now”. And after that, it seemed to me, they died as truly as Father was dead.

Like James Joyce’s Ulysses (1922) and Woolf’s Mrs Dalloway (1925), ‘At the Bay’ covers just one day from different points of view. Modernist writers followed the example of cubist artists, who used multiple perspectives to delineate their subjects.

Beryl Fairfield has become friendly with a controversial figure, Mrs Harry Kember: ‘the only woman at the Bay who smoked’. The other ladies consider her ‘very, very fast. Her lack of vanity, her slang, the way she treated men as though she was one of them, and the fact that she didn’t care twopence about her house and called the servant Gladys “Glad-eyes”, was disgraceful’. It is widely assumed that her husband must have married her for her money.

Linda Burnell, Beryl’s sister, is married, with children; Beryl is single and childless; neither woman has found fulfilment. Beryl indulges in fantasies about a lover, and in the final scene she is propositioned by a man. Although she recognises him, the reader is kept waiting. Her feelings fluctuate: initially, she senses the possibility of achieving her desire for ‘a new, wonderful, far more thrilling and exciting world than the daylight one’. When Beryl reaches the gate, she becomes terrified: ‘The moonlight stared and glittered; the shadows were like bars of iron’. Harry Kember urges her on; yet she fears the ‘little pit of darkness’ beyond the fence. Ultimately, Beryl faces a moment of understanding and, again, the reader wonders what her prospects will be subsequently.

Mansfield’s stories often address class issues. In ‘The Daughters of the Late Colonel’ Josephine and Constantia are scared of their maid, Kate, who treats them with unveiled contempt. The servant Alice, in ‘At the Bay’, feels just as trapped as Linda and Beryl; however, the disparity in rank and class prevents them from becoming allies. Growing awareness of class differences actually leads to a moment of epiphany for Laura Sheridan in ‘The Garden Party’.

She anticipates a wonderful day of lavish celebrations, until her pleasure is spoiled by the news that an impoverished local carter has died suddenly in a freak accident – leaving a wife and five children. Her immediate thought is to cancel the special event; however, the prospect of wearing a delightful new hat takes precedence over her qualms. Afterwards, as she sets out to deliver a basket of leftovers to the bereaved family, her success lingers: ‘And it seemed to her that kisses, voices, tinkling spoons, laughter, the smell of crushed grass were somehow inside her’. Entering the carter’s humble abode, the sight of his corpse moves Laura profoundly because he is ‘wonderful, beautiful’. An apology bursts from her lips: ‘Forgive my hat’. She can scarcely grasp or explain why she feels as she does, but the open, modernist ending intimates that Laura has been teetering on the threshold of learning something meaningful about herself and about life.

Mansfield’s relationships with other modernist authors are interesting. She had fractured, on-off friendships with both D H Lawrence and Virginia Woolf. After Mansfield’s death, Woolf admitted in her diary that her writing was ‘the only writing I have ever been jealous of … Probably we had something in common which I shall never find in anybody else’.