An introduction to Katie Mitchell's theatre

Katie Mitchell's theatre productions often combine extreme naturalism with creative use of multimedia and the exploration of feminist themes. Miriam Gillinson, a freelance theatre critic, examines the director's experimental and sometimes controversial techniques, and the strong reactions they provoke.

Katie Mitchell inspires great loyalty, respect – and a fair bit of outrage. She is a highly influential theatre director, feted in Europe and twice selected for the prestigious Theatretreffen showcase in Berlin. But Mitchell’s relationship with the British theatre establishment has always been complicated. Whilst she has worked as Associate Director at both the Royal Court and National Theatre, Mitchell has spent many years working abroad. She has legions of admirers in Britain and a team of long-term collaborators but her relationship with the mainstream critics, the general public (her bold shows have inspired many a disgruntled walk-out) and the establishment is chequered. She is restlessly experimental, unapologetically controversial and – perhaps most risky of all – an outspoken feminist, keen to fill the stage with female voices.

In Britain, Mitchell is best known for her bracing adaptations of classic plays (particularly Chekhov), for her naturalistic or Stanislavskian approach to performance (in which the purpose behind every line is fully interrogated), and for her immersive use of multimedia. Mitchell’s theatre often doesn’t seem like theatre at all: it might feel like flicking through a novel (Waves), a frightening lecture on climate change (Ten Billion), a nightmarish riff on Hamlet (Ophelias Zimmer), or something ‘between a dream, a nightmare, an art installation and a melodrama’ (Time Out on Anatomy of a Suicide).[1]

During an interview for National Theatre Discover, Mitchell reflects on the impetus behind her landmark National Theatre production in 2006, a startling remake of Virginia Woolf’s modernist novel The Waves: ‘I suppose I got rather bored of mainstream theatre and the way of organising narratives, with consecutive scenes and lots of words…’[2] Mitchell wasn’t interested in creating a conventional piece of theatre with a neatly defined beginning, middle and end. Instead, she wanted to find a way to theatrically mimic Virginia Woolf’s stream of consciousness technique and somehow place thought – chaotic, alive and fleeting – on stage. To do this, Mitchell would need to create a new theatre language with her company of actors, musicians and creatives: ‘The aim is to capture what happens inside people’s heads, and we’re going to use dance and sound and video to do that.’[3]

The result was a production that felt like a mix between a flickering film, a live radio record, a novel reading and a day dream. This was a show of fleeting moments of beauty, meticulously constructed before our eyes. Foley artists (sound artists), normally hidden behind the scenes, stood front stage and created the sound of shuffling feet and trickling water. Sound became visible and thought grew tangible. Each scene was elaborately prepared: an actor was dressed, a set façade placed in front of him and the action recorded and projected onto a screen above the stage. Tiny moments took on momentary majesty; a match sparking into flame or a window pane streaked with rain pierces itself on the mind. 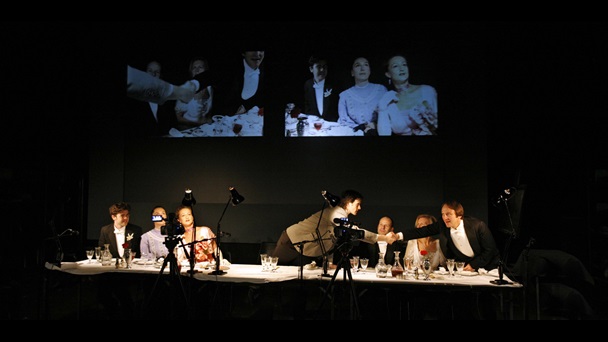 ‘Waves’ offered up a new type of theatre, which did not strive to be complete, chronological or even coherent. Mitchell’s production also paved the way for a new type of relationship between a theatre production and its audience – a relationship that could be tricky and uncomfortable but honest and challenging too. With so much activity on stage and so much artifice revealed, ‘Waves’ allowed the audience to choose which characters to follow, and how much magic to believe in. Some critics loved it (‘Theatre and video come together so seamlessly and complement each other so exquisitely it is as if Mitchell, her actors and video artist Leo Warner have created an entirely new art form’[4]) and others hated it (‘There seems to me something extravagantly pointless about trying to give Woolf’s words a physical reality…a celebration of technical ingenuity that leaves the heart untouched.’[5]).

Naturalism in the extreme

Mitchell’s strident re-interpretations of classic plays – Chekhov’s in particular – have also divided opinion. The story goes (and it is a story Mitchell repeats often) that after Mitchell’s and playwright Martin Crimp’s version of The Seagull at National Theatre in 2006, a fuming spectator sent Mitchell a programme scrawled with the words: ‘Rubbish, rubbish, rubbish!’ The reason for this outrage (with many critics following suit) was largely down to Mitchell’s unconventional staging choices. Mitchell’s production was infused with restless activity: servants scurried across the stage, doors slammed, plates clattered. On top of this, the play was shorn of a solid context, prompting the Guardian to complain: ‘Where are we?’[6]

This decision to flood The Seagull with the clamour of everyday life felt risky and novel on the National Theatre stage – but Mitchell’s staging choices were, in reality, merely her own distinctive take on a theatre style known as ‘naturalism’, in which all the activity on stage is rendered as close to ‘real’ life as possible. Naturalism was extolled by Stanislavsky but what is striking about Mitchell’s version of naturalism is just how pronounced and theatrical it can feel: the actors’ movements are so studied they can sometimes seem robotic, the activity so ‘real’ it actually feels unreal. Many of Mitchell’s shows are naturalistic, then – but they are naturalistic in the extreme.

Photograph of Ben Whishaw and Hattie Morahan in Chekhov's The Seagull, 2006 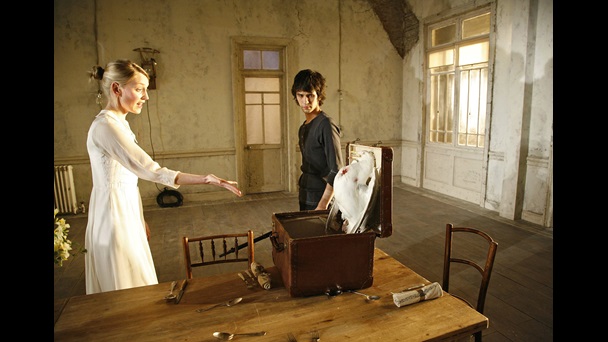 Mitchell re-interpreted The Seagull using her own take on the theatre style 'naturalism'.

Mitchell’s naturalistic productions are the result of an intense rehearsal process. It is during these rigorous rehearsals that Mitchell nails down the extensive details necessary for her ‘extreme’ naturalism. The script is studied forensic detail, every tiny movement examined, the backstory of each character painstakingly discussed. The activity back-stage (Mitchell often cues her actors from a few feet off-stage) and unspoken histories are just as important as the main action on stage. Behind the scenes and centre stage cannot be fully separated in a Katie Mitchell production.

Naturalism is just one aspect of Mitchell’s theatre: feminism, deconstruction of the text and an increasingly immersive use of multimedia have become equally important over recent years. The Forbidden Zone (Barbican, 2016) is a collaboration between Katie Mitchell, playwright Duncan Macmillan and, as with Waves, video artist Leo Warner. The show tells the story of German scientist Fritz Haber, who weaponised chlorine gas and effectively invented chemical warfare. It is a film and female-led take on war (feminist texts are woven into the script) and is seen through the eyes of Fritz’s wife Clara Immerwahr, who eventually committed suicide in a public act of protest against her husband.

In a similar manner to Waves, the on-stage activity was filmed live and projected onto a large screen that hung above the stage. Sometimes the screen seemed to extract great life and energy from the tiny figures bustling below, at other times it threatened to crush the stage completely. Tiny details embedded into the meticulous stage design and action – a DANGER sign on a chemical bottle or a soldier’s trembling arm – took on great significance. In a powerful protest against the brutal anonymity of war, the camera closed in on individual faces, magnifying them way beyond their normal ‘human’ scale. A close-up of a woman’s eyes (bigger than an army of men) was projected above the stage, all seeing and all important – if only for a moment.

Mitchell’s works continues to provoke heated debate. Her 2016 production of Donizetti’s opera Lucia Di Lammermoor was performed on a split stage, allowing us to witness Lucia’s lonely and sometimes seedy back-stage life. This bold approach so enraged some spectators that the Royal Opera House felt compelled to issue a warning to the public. Mitchell’s unflinching production of Sarah Kane’s notoriously violent play, Cleansed (National Theatre, May 2016), prompted gleeful tales of spectators fainting in the aisles. Her arch deconstruction of Shakespeare’s Hamlet – Ophelias Zimmer (Royal Court, 2016) – grinded the audience into submission as the terrible boredom of Ophelia’s closeted life wriggled its way under the spectator’s skin.

Anatomy of a Suicide (Royal Court, 2017), written by Alice Birch, is one of Mitchell’s most explicitly feminist works to date. Three generations of women, all suffering from depression, stand side by side on a gloomy stage. Their scenes overlap and crash up against each other: words, tics and mannerisms slide between these women, as depression make its dark presence felt across the generations. In between these jagged and disturbing scenes, the women are stripped down to their underwear. Music pulses, the lights throb and the three actresses turn towards us, imploring us to watch, listen and care. Mitchell’s theatre continues to be peculiar and thrilling – symptomatic of a director that refuses to settle and always sets out to unsettle her audience.

[3] From Heroine to Villain, Telegraph interview with Dominic Cavendish, 30 October 2006