An introduction to Stanislavski

Petonelle Archer explains how Konstantin Stanislavski developed his legendary method for training actors to discover the inner world of their characters.

In 1898 Konstantin Stanislavski and Vladimir Nemirovich-Danchenko formed the hugely influential Moscow Art Theatre. An important production in the opening season was Anton Chekhov’s The Seagull, and in honour of this and the long artistic association with the playwright, the Theatre took the symbol of a seagull as its emblem. The play’s premiere in St Petersburg in 1896 had not been a success, and Stanislavski had spent months working on detailed staging and character notes to create a realistic setting for the actors in his production. His attempts to imitate real life on stage mirrored the preoccupations of the naturalist movement in literature, initiated by Émile Zola. In his novels, Zola attempted to depict characters objectively and accurately, characters whose actions are controlled by a combination of factors relating to their environment and to inherited traits.

Photograph of Chekhov, Stanislavski and the Moscow Art Theatre group, 1900 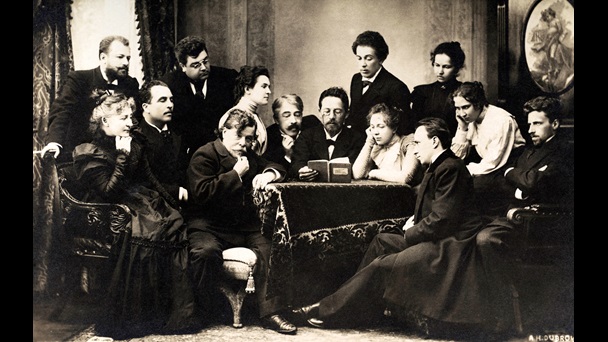 Naturalistic or realistic theatre incorporates the concept of the ‘fourth wall’ – the idea that the audience is outside the fiction, peering in on the 'real' events taking place on stage. To maintain the illusion of reality, the actors portray their characters as authentically as possible, avoiding stylised theatrical techniques (such as addressing the audience directly). Settings, too, are true to life, often containing period details. Plays tend to concern the lives of middle- or working-class characters in contemporary contexts, and often address topical social issues. Dialogue is based on conversational prose that reflects everyday life.

The Moscow Art Theatre production of The Seagull was more successful than the first, but Stanislavski realised that he had concentrated on an external ‘truth’ without giving the actors direction for their inner emotions. Chekhov was driven to exclaim ‘But the theatre is art! …. You don’t have a fourth wall!’[1]

Troubled by his perceived lack of success as an actor and by the traditional autocratic role of the director, Stanislavski worked on a new methodology for training and practice; he set about creating a ‘system’ which would give much more creative power to the actor.

He used improvisation as a key tool to enable the actors to explore their inner emotions, and encouraged them to train their bodies and voices in readiness for the physical and emotional demands of a role. His book, An Actor Prepares (1936), takes the form of a series of semi-fictional acting classes in which students engage with his methods to help them tackle the challenges involved in playing a new role.

Here we explore some of the techniques that form the basis of his practice.

The actors must make an initial examination of the text to gather information about their characters’ situation, relationships, history and physical characteristics. This material is used as a baseline for all further character development. In addition, the actors are encouraged to consider how the details of the production, such as mise en scène, sets, lighting, costumes and properties, affect the characters’ psychology and actions.

Each character in the play has an overarching objective (such as ‘to achieve independence’) towards which all of their actions are directed. Progress along the way is subdivided into units which have objectives, often examined through an active or transitive verb, for example, ‘to confront her’ or ‘to tempt him’. For each objective, the actors may need a corresponding physical action to deal with an obstacle or barrier. The through-line is the path that takes the character from an initial position to his or her goal or super-objective, which is often the outcome of the play.

The play has a super-objective, which Stanislavski describes as:

… the inner essence, the all-embracing goal, the objective of all objectives, the concentration of the entire score of the role, of all its major and minor units. The super-objective contains the meaning, the inner sense, of all the subordinate objectives of the play. In carrying out this one super-objective you have arrived at something even more important, superconscious, ineffable, which is the spirit of [the writer] himself, the thing that inspired him to write and which inspires an actor to act.[2]

In order to be able to ‘inhabit’ their characters, actors should explore their own experiences to find equivalent emotions to those examined in the text and on stage. At the age of 25, cast as an elderly knight in a Pushkin play, Stanislavski spent a night locked in the cellar of a castle in an attempt to stimulate his imagination. He believed that accessing memories or creating analogous situations in real life would help actors to avoid using stereotypical tropes in performance.

Photograph of Stanislavski's 1903 production of Chekhov's The Cherry Orchard 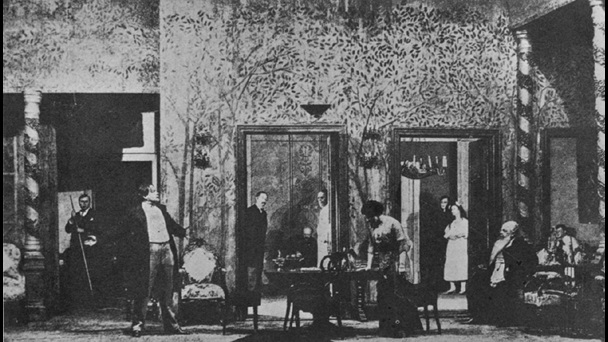 Stanislavski encouraged the actors of the Moscow Arts Theatre Group to stay 'in character' even when undertaking mundane actions.

By remaining ‘in character’, even when engaging in mundane physical actions, an actor can improve the veracity of a performance. During the rehearsal process, an actor should move from ‘activity’ – a simple piece of stage business – to finding a set of ‘physical actions’ which will lead to a more complex psychological portrayal of character.

In rehearsal, the actor must respond to questions such as ‘What would you do if you were in this particular situation?’ Stanislavski believed this would help to elicit honest and direct feelings in the actor, leading to a more truthful performance.

The subtext is driven by the underlying meaning in the play, as opposed to the words declared on stage. This can be communicated to the audience through, for example, the actor’s use of intonation, gesture, pauses or stillness. Stanislavski instructs the actor to create all of the thoughts which precede his or her cue, but not to express them all. ‘Keep in mind that a person says only ten per cent of what lies in his head, ninety per cent remains unspoken’.

These terms relate to the speed, intensity and patterning of action and delivery.

Stanislavski describes characters as having an inner ‘emotional turmoil’ whatever their outward appearance. He advises actors to listen to the inner tempo-rhythm of their lines and use this as a key to finding psychological truth in performance.

The revolutionary spirit of the naturalist movement has had a widespread and persistent influence on theatre in Europe and America. The treatment of contemporary social issues, the use of ideas to inform action, the focus on the representation of women and the link between theory, text and performance are still at the core of much of the theatrical experience today.

… we sought for inner truth, for the truth of feeling and experience …[3]