An introduction to The Homecoming

Michael Billington considers The Homecoming in the context of Harold Pinter's life and work, and explores how attitudes towards the play's portrayal of gender relations have changed.

1965 was a great year for new British plays. Edward Bond's Saved dealt with the violence of an educationally deprived underclass, and horrifically showed a baby being stoned to death. John Osborne's A Patriot For Me put a drag-ball on stage to indicate the sexual conflicts in the last days of the Austro-Hungarian Empire. On a more cheerful note, Peter Shaffer's Black Comedy was a brilliant farce in which characters stumbled around in the dark on a fully lit stage. But of all the plays to emerge that year, none has survived so well as Harold Pinter's The Homecoming. When I saw it in its famous first production at London's Aldwych Theatre in 1965, it left audiences puzzled, intrigued and shocked. Seeing it again, in a 50th anniversary revival at the Trafalgar Studios – starring Gemma Chan from TV's Humans – I discovered it still had the power to provoke fierce discussion and argument: a sure sign of a great play.

Programme for The Homecoming at the Aldwych Theatre, 1965 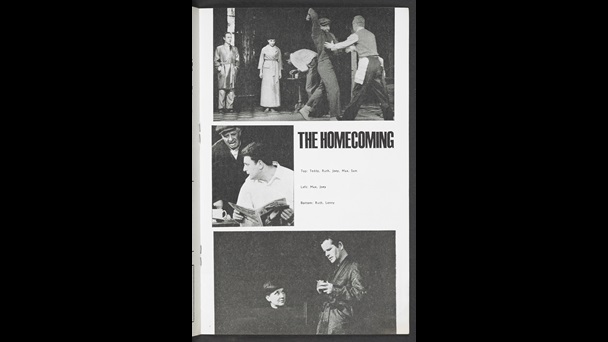 Usage terms © Aldwych Theatre. You may not use the material for commercial purposes. Please credit the copyright holder when reusing this work. David Sim: © David Sim / ArenaPAL www.arenapal.com

But who exactly is – or more precisely was, since he died in 2008 – Harold Pinter? He early on, in plays such as The Birthday Party (1958) and The Caretaker (1960), wrote work that was regarded as enigmatic and mysterious: ‘like a Hitchcock movie with the last reel missing’, as one critic wrote. But, while Pinter was supposedly baffling theatre audiences, he also wrote plays for television such as The Collection (1961) and The Lover (1963) that went out at peak-viewing periods and gained mass audiences. He also wrote the scripts for popular movies such as The Servant (1963) and The Quiller Memorandum (1966), still one of the best Berlin spy movies ever made.

Pinter came from a working-class East End Jewish family and, as a teenager, greedily devoured all the great modernist authors. Dostoevsky, Kafka, James Joyce, T S Eliot, Virginia Woolf and (later on) Samuel Beckett were his favourites. As a young man, Pinter also worked as an actor playing in a huge variety of thrillers, whodunnits and farces. Samuel Beckett was one of Pinter’s favourite writers when he was a young man. The two playwrights were later to become great friends, exchanging letters and postcards.

Pinter was a unique blend of the kind of intellectual you see in European cafes and a practical man of the theatre. That helps to explain what he did when he came to write plays. I would, in fact, pick out two qualities that made Pinter a revolutionary dramatist.

Pre-1950, we accepted the idea of the dramatist as an omniscient figure who knew everything about his or her characters. Beckett helped to change that in Waiting for Godot in 1955. But, unlike Beckett, Pinter placed his characters in a concrete, realistic setting and suggested he knew no more about their ultimate fate than we did: he simply offered audiences the evidence and then allowed them to make up their own minds. Pinter also radically changed the language of drama. In the past, plays had tended to be written in high-flown poetry or supposedly realistic prose. What Pinter did was to take common everyday speech – with all its hesitations, repetitions, periodic crudities and aching silences – and turn it into a form of poetry. Pinter took common everyday speech – with all its hesitations, repetitions and aching silences – and turned it into a form of poetry.

All this is seen in The Homecoming. On a surface level, the action is perfectly clear. Teddy, an academic living in America, returns to the north London home where he grew up. He brings with him his wife, Ruth, whom he secretly married some years ago and whom his family has never met. Ruth discovers that she is an object of curiosity to the members of this brutal, misogynist, all-male household. Max, the father, is a tyrannical ex-butcher. As for Teddy's brothers, Lenny is a manipulative pimp and Joey a dim-witted boxer. At some point, Ruth decides to let her husband return to America without her and to stay with her rackety in-laws. It is even suggested, at the end, that they plan to make her earn her keep by becoming a high-class sex-worker in Soho. The ending still shocks.

But, in order to understand the play, one needs first to look at its origins. In writing Pinter's biography, I discovered that all his plays had their starting-point in real life. In the case of The Homecoming, I found that one of Pinter's closest Jewish friends from his Hackney youth had secretly married a Gentile girl and become an academic in Canada, where he and his wife raised a family: eventually, Pinter's friend was persuaded by his old chums to come home and reveal the truth. Pinter was emphatic that The Homecoming is not a specifically Jewish play about what, in the immediate post-war world, was seen as the cardinal sin of ‘marrying out’. Nor, Pinter stressed, is the play a direct transcription of actual events. But The Homecoming, like all his work, was triggered by memory and experience (Pinter's first wife, Vivien Merchant, was also a non-Jewish girl whom he married without inviting his family) which then takes off into the realm of imagination. 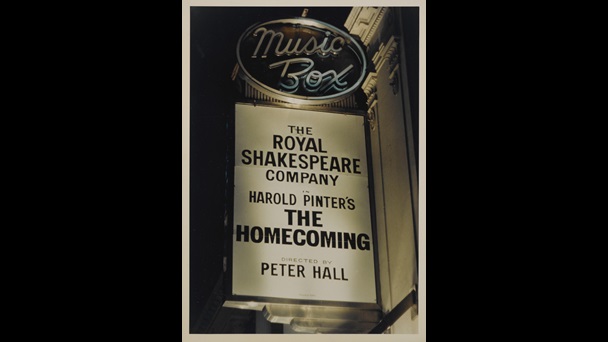 The Homecoming at the Music Box theatre, New York, 1967, directed by Peter Hall, starring Vivien Merchant as Ruth and Paul Rogers as Max.

But the question inevitably arises of what the play actually means. Above all, there is still a fierce debate about whether Ruth is an exploited victim or a free agent. The answer varies depending on the viewpoint (and maybe the gender) of the questioner and the age in which it is asked. When the play first appeared, some saw it as a mythic study of the sacrifice of the ancient king (Max) and his replacement by a fertility goddess (Ruth). Others saw it as a classic Pinter study of a battle for territorial supremacy watched by an emasculated observer (the husband, Teddy). It was also seen as a Freudian fantasy in which sons humiliate a father (Max) and achieve sexual conquest of the surrogate mother (Ruth).The great thing about Pinter is that all those interpretations are perfectly valid. But what fascinates me about the play is how attitudes to Ruth have subtly changed over the years. In 1965 many male critics were shocked at Ruth's seeming acceptance of the role of upmarket sex-worker. It took a female critic, Penelope Gilliatt, to point out that Ruth achieves a form of empowerment. ‘Ruth’, wrote Gilliatt, ‘looks on her body rather as a landlord would look on a corner-site. As soon as she has apparently been exploited sexually she really has the advantage because she owns the property’. Ruth negotiates the terms and conditions of her role as an upmarket sex worker.

The more I've seen the play, the more I've come to view it as an implicitly – nothing in Pinter is ever explicit – feminist work. Our first glimpse of Ruth and Teddy reveals the hidden tension in their marriage. Ruth then encounters Teddy's brother, Lenny, who tries to intimidate her with stories of his violence and sexual bravado; Ruth listens quietly and then completely routs Lenny when they do something as seemingly simple as battle over a glass of water. Throughout, Ruth is poised, cool, unruffled; she even puts up with the suffocatingly patronising tone of Teddy who, urging her to return to America, says ‘You can help me with my lectures when we get back’. The fact is that it is Ruth herself who makes the decision to abandon the sterility of American campus life for the noisy exuberance of north London. The final image of the play, with Ruth enthroned in Max's chair and surrounded by supplicant males, suggests to me that she has exchanged captivity for freedom, and that the idea of her becoming a prostitute is simply the family's fantasy. Ruth (‘Susan’ in this early draft) offers to pour ‘a long cool sip of water’ down Lenny’s throat.

Photograph of The Homecoming by Harold Pinter, 1990 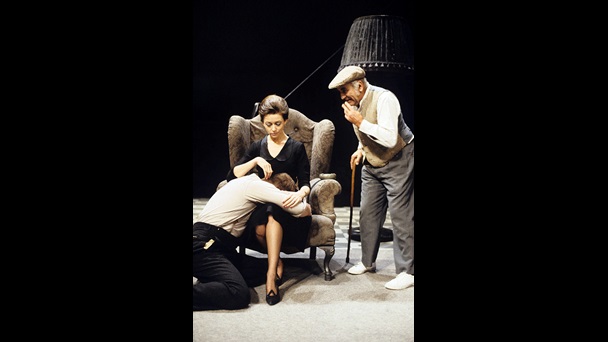 The final scene of The Homecoming in which Max and Joey kneel before the seated Ruth, from a production directed by Peter Hall at the Comedy Theatre, London, in 1990.

But don't take my word for it: you will have to make up your own mind. What is indisputable is the vitality of Pinter's language in its portrait of a coarse, violent, male household: ‘I love and detest the lot of them’, Pinter once wrote in a letter to a friend. Each member of the family also has his own idiom. Max, the one-time butcher, exudes a patriarchal crudity. Speaking of his late wife, he says ‘Even though it made me sick just to look at her rotten stinking face, she wasn't such a bad bitch’. The pimping Lenny, meanwhile, adopts a tone of affected knowledge in the presence of his brother, Teddy, asking him at one point: ‘Do you detect a certain logical incoherence in the central affirmations of Christian theism?’ It is typical of Teddy's detachment that he loftily replies, ‘That question doesn't fall within my province’. It is also significant that Ruth cuts through all the male point-scoring at this moment by suggesting that actions often carry greater weight than words. ‘Look at me’, she says: ‘I ... move my leg. That's all it is. But I wear ... underwear ... which moves with me ... it captures your attention. The action is simple. It's a leg ... moving’. Even the use of three dots, to denote a slight pause, demonstrates Pinter's ability to show that theatrical poetry resides in physical gesture as well as verbal outpouring. The Homecoming is too rich a play to be encompassed in a single essay. It offers multiple possibilities. It is, in part, a play about the savage bonds of family life. It is about the reckless fantasies that fill the masturbatory dreams of an all-male household. It is about the unknowability of the past and, in particular, about the presumed faithlessness of Max's late wife. But, for me, it is primarily a play about Ruth's homecoming and her realisation that, in rejecting the role of a trophy-wife, she is reclaiming her independence and, in Pinter's own words, is ‘in possession of a certain kind of freedom’. It is a measure of Pinter's innovative genius that he leaves it to us to determine the precise nature of that freedom.

Photograph from a production of The Homecoming in Stockholm, 1993 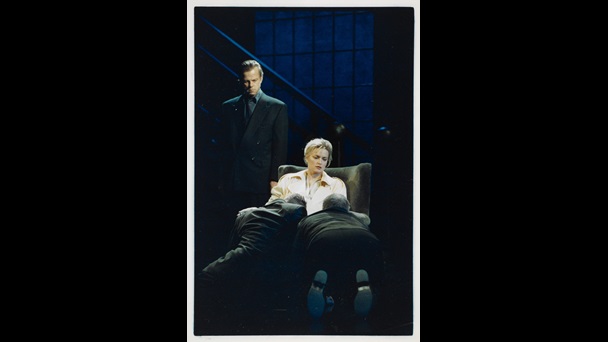 The final scene of The Homecoming from a 1993 production in Stockholm, Sweden.