Auden loved all kinds of music, from opera and nursery rhymes to blues and Berlin cabaret. Here Valentine Cunningham explores Auden’s musical influences and considers how music helped to produce some of his most subversive work.

Poetry and music have always gone together. And of all the great modern poets who have kept alive the ancient alliance between poetry and singing, there's no one to beat W H Auden. Auden sang without stop.

We've all, he said on one of the many public occasions when he talked about music, ‘experienced occasions when, as we say, we felt like singing’. He thought composers the most enviable of artists because: ‘Only your song is an absolute gift.’ That's in his sonnet ‘The Composer’, which praises song for being artistic perfection. In his long poem ‘Letter to Lord Byron’ he tells us that when it comes to expressing ‘the heart-felt exultations and the short despairs’, a musician is required: ‘Bach, say, or Schubert’. Auden doted on opera, too. Opera's plots might be daft, he said, their performers ludicrous fatties in funny frocks, but it tells the truth about love.

No surprise, then, that Auden's poetic career should be one long effort to get his writing as close as could be to the condition of music. He poured out songs, ballads and lullabies. He collaborated with composers. One of his strongest poetic times was in the 1930s, writing love lyrics for Benjamin Britten to set (many of them, of course, addressed to Britten). He translated libretti into English and was a keen librettist in his own right, providing the words for Britten in the American operetta Paul Bunyan, for Hans Werner Henze in Elegy for Young Lovers and The Bassarids, and for Stravinsky in The Rake's Progress.

Benjamin Britten's music for The Ascent of F6, a play by Auden and Isherwood 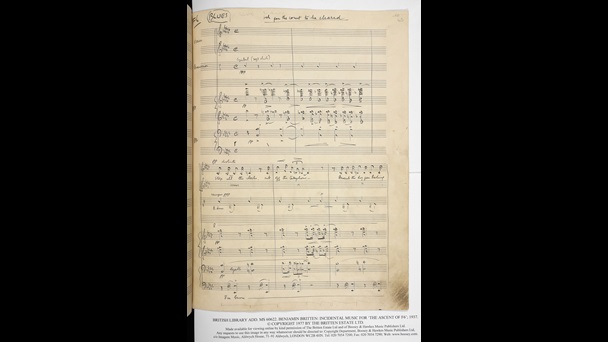 Usage terms Benjamin Britten: © Britten-Pears Foundation, Aldeburgh. Published under a Creative Commons Non-Commercial Licence. © Reproduced by permission of Boosey & Hawkes Music Publishers Ltd. Published under a Creative Commons Non-Commercial Licence. W H Auden: © Copyright by the Estate of W. H. Auden. You may not use the material for commercial purposes. Please credit the copyright holder when reusing this work. Christopher Isherwood: Copyright © Katherine Bucknell and Don Bachardy 2012, used by permission of The Wylie Agency (UK) Limited. Except as otherwise permitted by your national copyright laws this material may not be copied or distributed further.

The Ascent of F6 by W H Auden and Christopher Isherwood 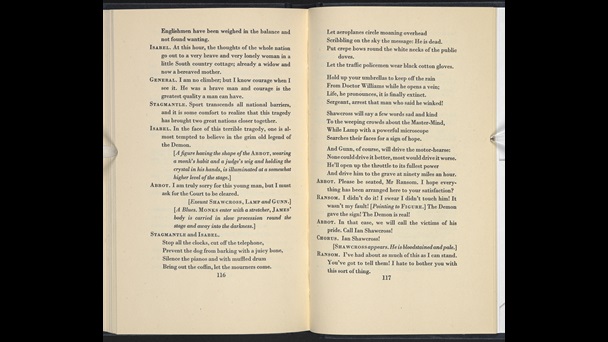 Extract from Auden and Isherwood’s 1936 play The Ascent of F6, including the lyrics for the song ‘Stop All the Clocks’.

So far, so posh. But Auden was also captivated and animated by lower musicality – the demotic, the popular, the vulgar. His Complete Works are packed with songs flavoured by the 20th century's popular forms – blues, cabaret. Indeed, his regular rhyming habits were greatly influenced by Broadway. ‘All music is good except the boring kind,’ he said, quoting Rossini. He hated only the middlebrow. His mission was the culturally subversive one of marrying the high and the popular, and poetical-musical eclecticism was his means.

He propagandised hard for the value of ordinary verse. For him, nursery rhymes, kiddy doggerel and folk verse were the genetic stuff of poetry. ‘Sing a song of sixpence, A pocket full of rye’ was pretty nearly ‘pure poetry’. The first part of the anthology The Poet's Tongue (1935), which he edited with John Garrett to show schoolchildren what poetry is, consists mainly of such material. It was the kind of lyricism Auden championed as ‘light verse’ in his anthology The Oxford Book of Light Verse (1938) – poetry as it might be remembered by children and the person in the street, the poetry, as Auden put it, of a ‘genuine community’. No one before this had put such verses on the cultural high ground.

One of the loveliest things Auden ever wrote is his introduction to the 1947 selection of John Betjeman's poems Slick But Not Streamlined, in which he pays tribute to the initiating poetic power of hymns. Betjeman is ‘a man one has sung hymns with’. He must be Auden's double, or the ghost of Auden’s dotty Anglican Aunt Daisy, for how else ‘could he be so at home with the provincial gaslit towns, the seaside lodgings, the bicycle, the harmonium’, or know ‘what hymns are sung to Melcomb, Eudoxia, Redhead 76, Nicaea, Irby, Stockport, University College, etc’. Betjeman's poems will stand on Auden's shelf next to the treasured Icelandic Legends, Strüwwelpeter and Hymns Ancient and Modern.

From delighting in the ordinary aesthetics of the church and chapel hymn, the hum and strum of the harmonium, it was an easy step to embrace the verbal and musical pleasures of the popular songbook of the 1920s and 30s: the great waves of American sounds flooding over Europe, the black American jazz and blues 1930s leftist poets particularly admired as up-to-date examples of folk poetry, as well as the sounds of Berlin cabaret, which Auden experienced first-hand in that city at the end of the 1920s – the musical art that Bertolt Brecht and Kurt Weill and their kind transformed into a great weapon of socialist satire.

In the 1930s Auden turned out many ‘cabaret songs’. They were mainly written for Hedli Anderson, a singer in exile from Hitler's Berlin. She became the star of the Group Theatre in which Auden, Isherwood, Britten and Rupert Doone tried to do German-style satirical cabaret and musical drama for London. Here was Brecht-Weill song given an American accent for British consumption by popular-American-music dotty Auden. Graham Greene acclaimed Cole Porter's song ‘You're the Top’, from the stage show Anything Goes, for ‘the Audenesque charm’ of its rhymes (‘murdered’, Greene said, in the 1936 film version). The kind of rhymes Auden worked very hard at reproducing. ‘I'm a jam tart, I'm a bargain basement, / I'm a work of art, I'm a magic casement’: that’s a typical bit of silly Porteresque from one of the ‘cabaret songs’ for Hedli Anderson. 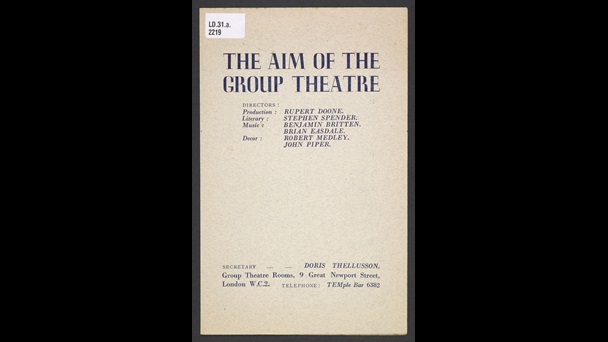 Pamphlet advertising the Group Theatre, the company who performed the plays by Auden and Isherwood.

Usage terms © The Group Theatre. Except as otherwise permitted by your national copyright laws this material may not be copied or distributed further.

The likes of Porter and Ira (‘I love to rhyme’) Gershwin were Auden's patron saints in such song-writing. Take, for instance, that characteristic quick-fire exchange of rhymes between Inkslinger and the Chorus in ‘No 15, The Love Song’ in the Auden-Britten Paul Bunyan:  ‘Appendectomy’ (‘'s a pain in the neck to me’); ‘Ichthyosaureses’ (‘Won't sing in choruses’); ‘Septuagesima’ (‘Ate less and lessima’). It’s straight Gershwinese – Gershwin of the ‘sweet embraceable/irreplaceable/silk-and-laceable you’ master-rhyming ilk. Here was the cod-rhyming of the playground, re-spun now for adults who had the verbal zest and zaniness of popular American song in their heads. It was Auden’s investment in what is celebrated in Paul Bunyan as ‘the accidental beauties of silly songs’ (lovely Audenesque phrase that one, enjoying Auden’s favourite formulaic arrangement of nouns and adjectives).

Auden knew very well what his enemies, the censors of his constant blaspheming against the norms of highbrow culture, would say. And his constant workings of the popular musical lode were indeed provocative cultural shock tactics. Shocking then, and shocking still. It does make you really sit up when you find out what the Selected and Collected editions of Auden's works suppressed: that the poem ‘Victor’ (about a religious murderer) was originally to be sung to the tune of ‘Frankie and Johnny’, or that ‘James Honeyman’ (about a scientist inventor of poison gas) was set to the tune of ‘Stagolee’. Singing those poems, as originally invited, to those tunes carefully works against the grain of the grown-up ethical horror their subject-matter might properly otherwise prompt. Here was contrived tonal discomfiture – music as the handmaid of a terrible spry blaspheming against the good and the human.

Music as weaponry. As in ‘Miss Gee’, that cynical satire against a churchy old maid who dies of cancer brought on by sexual repression: a sick, molesting poem, made even worse when you learn it was to be sung to the tune of the ‘St James Infirmary’ blues. Jeeringly cut-up on the autopsy slab by repressed medical students (Oxford Groupers, who’d like to be gropers, in Auden’s harsh implicit pun, but can’t because their Moral Rearmament piety won’t let them), Miss Gee is as it were doubly roughed over by the cruel contrast that the musical setting invokes with the lamented beloved on the mortuary marble in the extremely moving ‘St James Infirmary’ blues: ‘see my baby there ... so cold, so white, so bare’.

Here were cultural, poetical and moral blasphemies egged on by the musical setting. Secular blasphemings that draw aweingly on their foundational religious force in the early poem titled ‘Chorale’. It’s one of Auden’s back-from-Berlin 1930 German poems, this one celebrating the private body parts and sexual energies of his tough German boyfriend Gert Meyer in slangy Berlin street demotic. He’s got ‘zwei nette Eier’ (‘two nice balls’), ‘Ein fein Schwanz auch dazu’ (‘also a fine dick’); and he’s good at all kinds of kissing and ‘blasen’ (blowing/fellatio). Sing it ‘To the Passion Chorale Tune’, the subtitle advises in English: the tune of the Lutheran hymn about the body of the crucified Christ that Bach adapted for his chorale in the Matthew Passion. ‘Oh Haupt voll Blut und Wunden’: known in English and English hymn books – and of course to the pious Anglican mothers of Auden and Isherwood and Britten – as the Easter hymn ‘O sacred head sore wounded’. You couldn’t get more blasphemous than this. It was carefully offensive, an impious assault on all that was sacred, the conventions, the beliefs of Auden’s family, of his culture, of the Anglican Christianity he would return to at the end of the 1930s. At the time he of course passed it on to Isherwood, his close friend and collaborator and fellow-esteemer of Berlin boys (who saved it among his papers). But it was perhaps too much even for the then bad-boy Auden to publish. In 1948, some time before he got around to scrubbing out all the embarrassing settings from ‘Miss Gee’ and the rest, Anglican Auden was asked by the Saturday Review of Literature to name his favourite records. He put the Matthew Passion at the head of his list.