J R R Tolkien as map-maker in The Hobbit

Focussing on the maps within The Hobbit, Sally Bushell examines how J R R Tolkien was a highly visual writer who needed to draw and map as part of the creative process.

If you are writing a piece of pure fantasy, where do you begin? How do you make that world come to life and seem real to your readers? One way is through the presence of a map – a feature that is ubiquitous for ‘High Fantasy’, the genre created by J R R Tolkien, as it is not for any other literary genre. What does the map do? Since fantasy explicitly creates a world that signals its difference from our own in time and space, it must follow that it is precisely because fantasy is so self-consciously unfamiliar that the need is felt for a map to ground it. The fantasy world is consistent within its own terms, enabling it to be accurately mapped, but it is also absolutely not of this world. The presence of a map provides a familiar control and power over the alien landscape for the reader. It is no coincidence that Tolkien’s own imagination was powerfully visual and cartographic. Very unusually, Tolkien is a writer who draws and maps his worlds in order to write them in a highly integrated visual-verbal process. In a letter to his publisher about the writing of The Lord of the Rings he states: ‘[In] such a story one cannot make a map for the narrative, but must first make a map and make the narrative agree’.[1] As this makes clear, mapping was as important as writing to him.

This integrated process can be seen in Tolkien’s first literary work for children, The Hobbit (1937). The first edition of The Hobbit was both written and drawn by Tolkien. He designed the front cover, drew the ten ink illustrations and the two endpaper maps for the front and back of the book. Many of those illustrations involved depictions of routes across the landscape and even if we look at the front cover (here folded out flat) we can see that it is a highly stylised image that works almost like a map seen from a very low perspective. At any rate it depicts a route through the mountains to the ‘Lonely Mountain’. 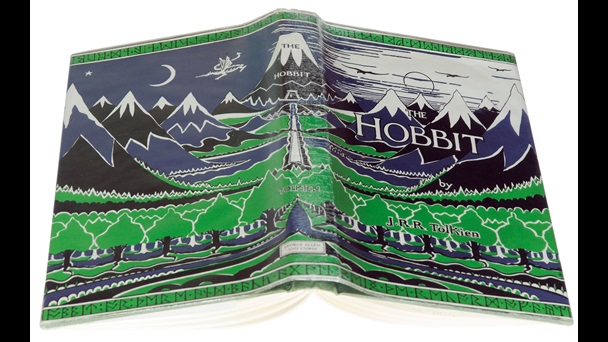 Within the covers of the book, on the inside as well as the outside, Tolkien also provided the maps. These ‘endpaper’ maps frame the text and they are a central part of the work itself – both as it was published and in terms of their importance to the writer’s imagination.

‘Thror’s Map’, given at the front of the book, is named after its supposed maker within the story, an ancestor of the leader of the dwarves, Thorin. We know that Thror’s map was important to Tolkien because it formed part of Tolkien’s earliest ideas and drafts for The Hobbit. Tolkien is recorded as recalling the starting point for The Hobbit very clearly. He was correcting examination papers when he came across a page left blank:

I scrawled: ‘In a hole in the ground there lived a hobbit.’ I did not and do not know why. I did nothing about it, for a long time, and for some years I got no further than the production of Thror’s map.[1]

Mapping and writing went together for Tolkien, right from the beginning: with the opening line (verbal) comes the making of the map (visual). 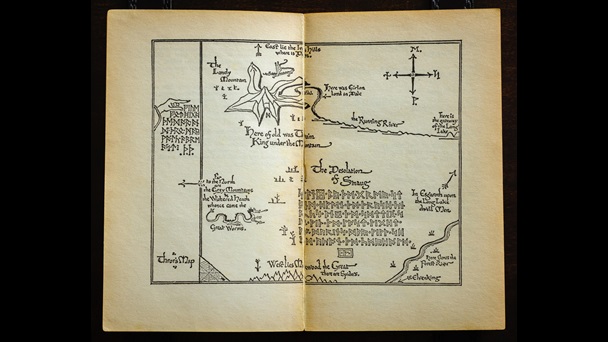 As readers, Thror’s map is also the first thing we see or read, since we encounter it before we read the story. What do we learn from the content on the map? What kind of world or culture has it come from? It appears to offer limited geographical information: the location of rivers, a mountain, a wasteland and warnings of dangerous areas containing worms and spiders. A compass orientation is provided, but the letters on the compass are not familiar so it is not immediately clear whether it is helpful or not. The pictorial nature of the map, and the presence of dragon pictograms, signal that it is ancient rather than modern and not of our world. This is reinforced by the ‘parchment’ colour of the background and the ornate font design. At the centre of the image lies a block of unreadable text in an alien language. The odd marginal space included on the left of the map also contains further runes of a similar sort with a hand that points slightly above them. All these elements strongly suggest that the fictional world we are about to encounter is very different from our own. So the (visual) map actively prepares us for the strange new (verbal) genre that Tolkien has created.

Early on in the book, ‘Thror’s Map’ is represented within the story where it is intended to aid the dwarves in their search for their ancestors’ treasure. Its usefulness is not immediately obvious, though, as the characters themselves make clear. The wizard Gandalf presents the map to its rightful owner, Thorin:

On the table in the light of a big lamp with a red shade he spread a piece of parchment rather like a map.

‘This was made by Thror, your grandfather, Thorin,’ he said in answer to the dwarves’ excited questions. ‘It is a plan of the Mountain.’
‘I don't see that this will help us much,’ said Thorin disappointedly after a glance. ‘I remember the Mountain well enough and the lands about it. And I know where Mirkwood is, and the Withered Heath where the great dragons bred.’
‘There is a dragon marked in red on the Mountain,’ said Balin, ‘but it will be easy enough to find him without that, if ever we arrive there.’[3]

The map described in the narrative corresponds to its visual counterpart, reassuring the reader that what appears on the endpaper is ‘the same’ as what the characters within the book are looking at. But the dwarves, whose quest this is, respond to the map with scepticism. It is in danger of being dismissed by them as a historical artefact rather than a thing of use, until Gandalf redirects their attention:

‘There is one point that you haven't noticed,’ said the wizard, ‘and that is the secret entrance. You see that rune on the west side, and the hand pointing to it from the other runes? That marks a hidden passage to the Lower Halls.’ (Look at the map at the beginning of this book, and you will see there the runes). (p. 34)

Gandalf's gentle rebuke to the dwarves (reinforced by the narrator) is significant to the reader as well. It reveals the crucial detail to which the hand was pointing. The map’s true value lies not in its representation of larger geography but in the runic message and in its disclosing of a highly site-specific location (the secret entrance in the side of the mountain) known only to a few.

The meaning of both sets of runes is not uncovered until the characters arrive at Rivendell. It is revealed to its owners when they show the elf lord, Elrond, the map and he is able to translate both sets of runes:

He held up the map and the white light shone through it. ‘What is this?’ he said. ‘There are moon-letters here, beside the plain runes which say ‘five feet high the door and three may walk abreast’ (p. 72).

The plain runes are those below the pointing finger (describing the secret entrance into the mountain). The ‘moon-letters’ are those in the centre of the map. Elrond translates: ‘Stand by the grey stone when the thrush knocks,’ read Elrond, ‘and the setting sun with the last light of Durin’s Day will shine upon the keyhole’ (p. 73).

Again Tolkien as mapmaker had strong ambitions for how these runes were to appear in his book: ‘Tolkien wanted ... the moon-runes to be printed as a mirror-image on the back of the map ... so that they could be read correctly through the paper when it was held as directed by the legend at lower left, simulating the effect of the runes as they are revealed to Elrond by moonlight’.[4] Unfortunately for Tolkien, the publishers would only allow a pair of endpaper maps for reasons of cost. Nevertheless, his attention to detail makes clear both how important mapping was to him, and how integrated a part of the experience of the work he wanted it to be for the reader.

If ‘Thror's Map’ is a map that allows the reader to share knowledge with the characters in the narrative, the more ‘general map’ of Wilderland that is published at the back of the book operates very differently. For one thing, this map is clearly intended only for the reader since the characters do not possess or use it within the story. Secondly, it is given after the narrative has ended.

The Wilderland map is far more closely tied into the narrative and the route that the characters follow than Thror’s Map. In fact, if we look more closely at the detail of it we can see that it allows us to trace the route, the stopping points and the journey of the characters. From left to right on the detail below we can see Rivendell, the old ford where they cross the river, the house of Beorn, the forest road through Mirkwood, hung with spiders’ webs, and on the far side the River Running. All these features correspond to key events in the narrative as the characters make their uncertain way towards their final destination. So, the front endpaper initiates the journey, action and quest, whilst the map at the back allows the reader to reflect upon the whole journey once it has been safely completed. In the case of The Hobbit this reinforces the reassuring subtitle of the book, ‘There and Back Again’, and allows the reader to revisit the story visually.

What have we learnt from approaching The Hobbit through its endpaper maps? First, we realise how carefully a spatial writer such as Tolkien thinks about the presentation of his maps and how important they were to him – and were to become to his readers. Tolkien emerges as a visual-verbal innovator who needed to draw maps as part of the creative process. Second, we learn about the compromises that the author is forced to make at the hands of publishers and market forces which bear directly upon the material nature of the literary work. And finally, we learn not to ignore any part of a book’s meaning – and always to read the map!