Sukhdev Sandhu explores the way in which, since the 1930s, writers such as J G Ballard and Hanif Kureishi have portrayed the suburbs as bland, consumerist and conservative.

It seems hard to believe, given how much scorn has been poured on them for well over a century, that there was a time when British suburbs were portrayed as vital and desirable. Writing in 1891, the journalist Sidney Low pointed out that the country’s population wasn’t rising in cities so much as in the rings just outside them. ‘The Englishman of the future will be a suburb-dweller’, he claimed. ‘The majority of the people of this island will live in the suburbs; and the suburban type will be the most widespread and characteristic of all’.

For Low, the rise of the suburbs was a good thing. He saw them as the antithesis of Victorian London, a city that, for all its economic productivity and population growth, he found to be essentially delinquent and degenerate. He described its architecture and streetscapes in language – ‘this Brazilian forest of houses, this Sargasso Sea of asphalt and paving’ – that made it seem foreign. Suburbia, by contrast, was a place of order, rationality, harmony; its homes and gardens sang an essentially patriotic tune.

A more comic and also more enduring snapshot of the suburban psyche, was published in book form the following year. George and Weedon Grossmith’s The Diary of a Nobody (1892), which originally appeared in serial form in the humorous weekly Punch, recounts episodes in the life of a lower-middle-class clerk, Charles Pooter:

‘My dear wife Carrie and I have just been a week in our new home, “The Laurels”, Brickfield Terrace, Holloway – a nice six-roomed residence, not counting basement, with a front breakfast-parlour …. We have a nice back little garden which runs down to the railway. We were rather afraid of the noise of the trains at first, but the landlord said we should not notice them after a bit, and took 2 pounds of the rent.’

This is, to paraphrase the name of a 1979 New Wave single by the Members, 'The Sound of the Suburbs'. It’s acquisitive, a little pompous, not especially masculine. (Low had thought suburbia would be the bedrock of the British imperial project.) It’s essentially domestic and inward-looking, rather than expansive and alert to broader social and cultural dynamics. It’s a voice that scholars have often associated with once-popular writers such as H G Wells, John Galsworthy and Arnold Bennett; the latter, discussed in Virginia Woolf’s famous essay ‘Mr Bennett and Mrs Brown’ (1923), was indicted for a ‘materialist’ approach to reality and paying too little interest to psychological complexity. 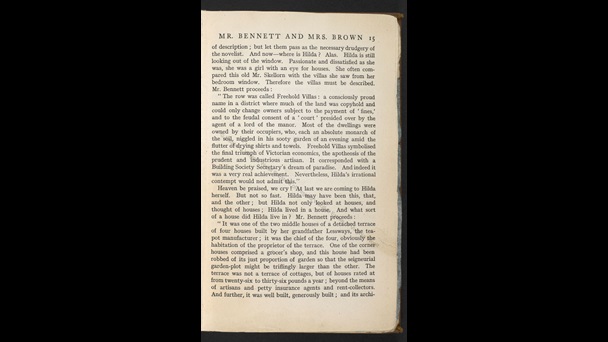 Virginia Woolf critiques Arnold Bennett’s novel Hilda Lessways, arguing that it favours long, detailed descriptions of suburban neighbourhoods and houses at the expense of capturing the nature and inner life of its lead character.

‘A kind of scum, churning against the walls of the city’

Almost all the early 20th-century writers whose works are still studied were essentially urbanists – whether it’s the language- and reality-scramblers of Dada, the speed and technology obsessives of Futurism, or the likes of T S Eliot (who launched his influential journal Criterion to challenge ‘suburban democracy’) and James Joyce (who described Rudyard Kipling as a ‘suburban subaltern’). Anthony Bertram, in The House: A Machine for Living In (1935), argued that ‘The man who builds a bogus Tudoresque villa or castellates his suburban home is committing a crime against truth and tradition. He is denying the history of progress, denying his own age and insulting the very thing he pretends to imitate by misusing it’. Two years earlier, the International Congress of Modern Architecture had been even fiercer, denouncing suburbia as ‘as a kind of scum, churning against the walls of the city … one of the greatest evils of the century’.

It was during the 1930s that a growing number of writers began to portray the inhabitants of suburbia as minor men. In ‘Letter To Lord Byron’ (1937), W H Auden contrasted ‘the John Bull of the good old days’ with ‘the bowler hat who strap-hangs in the tube’ and ‘kicks the tyrant only in his dreams’. In ‘The Magnetic Mountain’ (1933) C Day Lewis asked ‘Where is the bourgeois, the backbone of our race?’ only to answer ‘Bent double with lackeying’. Values that are championed in contemporary critical theory – ambivalence, liminality, in-betweenness: all of them invoking a kind of creative ambiguity – had scant value in the context of suburbia which was damned for being culturally stranded, for being neither rural nor urban.

For many commentators, the suburbs are places of consumption rather than culture. In his late novel Kingdom Come (2006), J G Ballard, widely regarded as one of the most perceptive observers of emerging landscapes (both social and psychological), talked of how ‘Beyond Heathrow [there] lay empires of consumerism … a dormant people who had everything [and] grazed contentedly like docile cattle … Over four decades every citizen of Brooklands, every resident within sight of the M25, was constantly trading the contents of house and home, replacing the same cars and cameras, the same ceramic hobs and fitted bedrooms. Nothing was being swapped for nothing. Behind this frantic turnover, a gigantic boredom prevailed.’

This ‘gigantic boredom’ has been dramatised time and again in American films as diverse as The Ice Storm (1997), American Beauty (1999), The Stepford Wives (2004) and Revolutionary Road (2008). Suburbia, for all its manicured lawns and glistening white picket fences, for all its niceness, is represented as a brake on ambition, an injunction against desire, a fetishisation of the nuclear family over vagrant, vivid youth. It’s a place where that energy gets sublimated and, all too often, channelled into spy-on-the-neighbour prurience, solitary drinking, hypocritical and hapless affairs. Where is there to go after one has moved to the suburbs? According to one mid-80s UK sitcom, in ever decreasing circles…

The funniest literary account of the suburbs is Hanif Kureishi’s The Buddha of Suburbia (1990), a semi-autobiographical coming-of-age novel set in the 1970s. In some ways it amplifies the belief of the Sierra Leonian writer A B C Merriman-Labor who, in his satirical travelogue Britons Through Negro Spectacles (1909), claimed, ‘In the low class suburbs stands the chance of being laughed to scorn until he takes to his heels’. At one point, Buddha’s central character Karim goes to see his white girlfriend only to have her father declare, ‘We don’t want you blackies coming to the house,’ before setting a Great Dane on him.

Typescript second draft of The Buddha of Suburbia by Hanif Kureishi 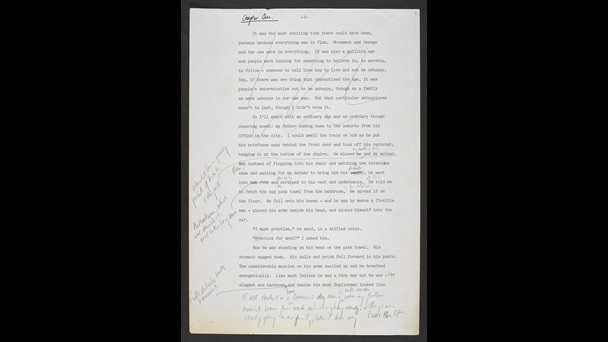 ‘So I’ll start with an ordinary day and an ordinary though cheering event: my father coming home to the suburbs from his office in the city’: Karim establishes the suburban scene in the second draft of The Buddha of Suburbia (composed 1987–88).

All Karim’s dreams during his adolescence revolve around escape. He thinks of Bromley as a prison that shackles its inhabitants, represses women, and subjects the children of immigrants to endless indignities. He doesn’t want to be insulated from the world by double glazing; he craves noise, experiences, sexual adventures, communities that are created out of social and political idealism rather than from race and DNA. He’s in love with pop music – particularly with David Bowie who grew up in Bromley – because of the premium it places on immersion, intensity and shape-shifting rather than more established and solid forms of identity. London becomes his Mecca.

For many of its readers, Kureishi’s novel, which was later adapted into a successful four-part television series, cemented the idea that suburbia was a homogeneous and culturally conservative enclave that was coded as white. In recent years, however, the British suburbs have become more ethnically diverse, socially stratified and harder than ever before to generalise about. A number of prominent television series and films by and about Asians – Goodness Gracious Me (1998–2001), The Kumars At No. 42 (2001–06), Bend It Like Beckham (2002) – have had suburban settings. News and current-affairs programmes routinely feature reports about terror cells being discovered there. Perhaps, after over a century of jokes and yawns, derision and diminution, suburbia – its hidden past, mutant present and fissile future – is about to get a sustained spotlight shone on it.