In the years after the First World War, a number of American writers took up residence in Paris. Steve Cleary assesses some of the work that came out of their time abroad.

This article provides an overview of those English-language writers, mainly North Americans, who were drawn to forsake their countries of origin to live and work in the French capital, most famously in the decade or so following World War One.

The 1920s was the golden age of literary modernism, and Paris was then the literary and artistic capital of the western world. A remarkable number of the men among these writers-in-exile had volunteered as ambulance drivers during the war, including the young Ernest Hemingway, who was seriously wounded while serving on the Italian front.

Hemingway's posthumously assembled memoir of the period, A Moveable Feast (1964), features many of the period’s cast of characters: Ezra Pound; Wyndham Lewis; Ford Madox Ford; James Joyce; F Scott Fitzgerald; and, centrally, Gertrude Stein, whose art-filled studio apartment Hemingway visited, and whose gnomic, faux-innocent literary style he in part adopted. As he put it in the book:

She had discovered many truths about rhythms and the use of words in repetition that were valid and valuable and she talked well about them.[1]

Photograph of Gertrude Stein in her Paris studio, 1930 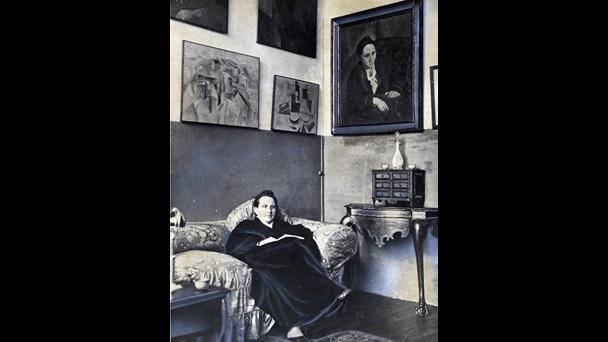 Photograph of Gertrude Stein in her Paris apartment, a meeting place for many writers and artists in the early 20th century. On the wall, right, hands a portrait of Stein by Picasso.

It was Gertrude Stein who first used the term 'lost generation' to describe Hemingway and his contemporaries:

That's what you are. That's what you all are,' Miss Stein said. 'All of you young people who served in the war. You are a lost generation … you have no respect for anything. You drink yourselves to death…'[2]

Hemingway disagreed with Gertrude Stein's indictment, but none the less used the phrase ironically as one of the two epigraphs to his first novel The Sun Also Rises (1926). In 1966, looking back on the Paris of the 1920s, US poet Archibald MacLeish wrote:

It was not the lost generation which was lost: It was the world out of which that generation came. And it was not a generation of expatriates who found themselves in Paris in those years but a generation whose patria, wherever it may once have been, was no longer waiting for them anywhere.[3]

As a struggling writer, Hemingway had little money to spare on books. He was thus fortunate to discover, 'on a cold windswept street',[4] an English-language bookshop with a rental library attached.

This was Shakespeare and Company, and its generous owner Sylvia Beach allowed Hemingway to borrow as many volumes as he wished, and to pay his subscription fees whenever he could find the money. Thus, on his first visit to this 'warm cheerful place'[5] Hemingway walked away with an armful of books by Turgenev, D H Lawrence, Tolstoy and Dostoevsky.

James Joyce was also a regular visitor. In 1922 Beach's company published his novel Ulysses, subsequently considered one of the high-water marks of literary modernism, after Joyce had been unable to secure publication elsewhere. 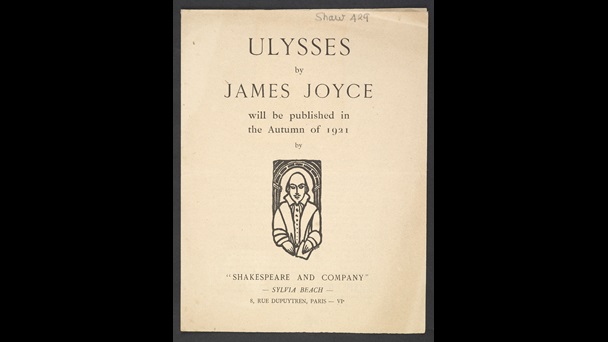 Sylvia Beach first met James Joyce at a party in Paris in 1920, when Joyce was still writing Ulysses. This is the prospectus and order form for the Shakespeare and Company edition of Ulysses that Beach sent out to potential customers.

Ulysses by James Joyce, published by Shakespeare and Company 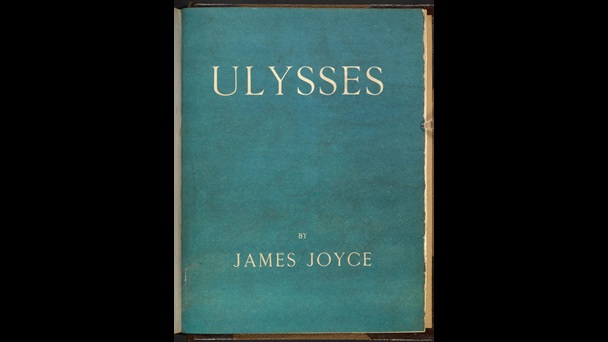 Front cover to the first edition of James Joyce’s Ulysses, 1922.

Two years later Beach persuaded Joyce to make an audio recording of an extract from the book, for pressing to disc. Just 30 discs were issued, and most were given away to Joyce's family and friends. The British Library holds one of the few copies to have survived, signed on the label 'James Joyce, Paris, 27 November 1924'. 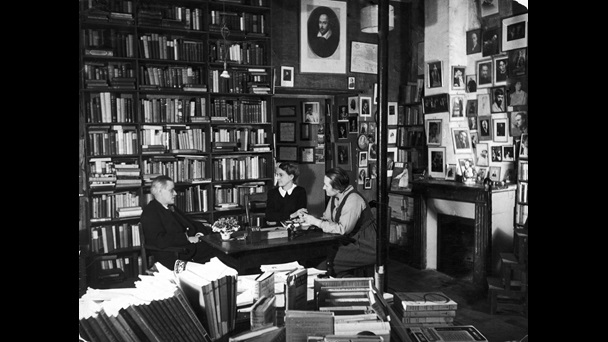 James Joyce and Sylvia Beach inside the Shakespeare and Company bookshop, 1938.

Like Hemingway before him, Henry Miller wandered the streets of Paris as a struggling writer, poor and often hungry but also happy: 'the happiest man alive'[6] if his alter ego in Tropic of Cancer is to be believed.

The novel was a first-person account of the sexual and other adventures of the archetypal American bohemian in Paris. It was first published in 1934 in an edition of 1,000 copies by the Obelisk Press, a company whose output mixed serious English-language modern and avant garde literature with books designed to appeal to English-language tourists seeking salacious content.

As with Joyce's Ulysses, the book could be published with impunity in France – where the obscenity laws applied only to books published in French – but was banned from importation to the US or UK on account of its explicit sexual content. The cover art – a giant crab holding a woman in its claws – was created by the 14-year-old son of Obelisk's owner Jack Kahane.

As an adult, Maurice Kahane (by then known as Maurice Girodias) would continue in the family tradition, overseeing the post-war rebranding of the Obelisk Press as the Olympia Press, and publishing key modern literary works such as Watt (1953) by Samuel Beckett, alongside works of light erotica such as Helen and Desire (1954) by 'Frances Lengel' (aka Scottish novelist Alexander Trocchi).

The Jazz Age and after

A burgeoning African-American community had existed in Paris since the 1920s, when black musicians and dancers had first enjoyed success in the clubs of Montmartre.

Writers Langston Hughes, Claude McKay, Gwendolyn Bennett and numerous other key figures of the New York-based African-American arts movement known as the Harlem Renaissance all spent time in the city in those years, finding France to be relatively free of the widespread racial discrimination prevalent in the US. Few, however, stayed more than a year or two.

In the post-war period, novelists such as Richard Wright, James Baldwin and crime writer Chester Himes pioneered a more permanent black American literary community. Wright was an established, highly successful novelist but the official persecution engendered by his outspoken statements on racial issues in the US had effectively forced him into political exile. Gertrude Stein helped Wright obtain a visa and was on hand to welcome him to Paris in 1946, in the last months of her life.

In the late 1950s members of the Beat Generation and their friends followed, escaping not racial discrimination (they were mainly white) but the strictures of US societal conformity in general.

Novelist William S Burroughs, poets Allen Ginsberg, Gregory Corso and Harold Norse and painter Brion Gysin took up residence at the legendary 'Beat Hotel' (in reality, the hotel had no name), at 9 Rue Gît-le-Coeur on the Left Bank.

'[This] fleabag shrine will be documented by art historians',[7] wrote Norse.

It was at the Beat Hotel that Gysin introduced Burroughs to the 'cut-up' literary technique, in which pre-existing texts, taken initially from newspapers and magazines, were cut up and juxtaposed to form new phrases. 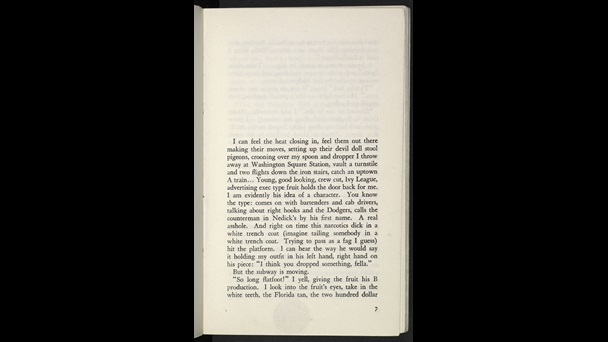 The Olympia Press published William S Burroughs’ The Naked Lunch (1959), which had been refused by American publishers due to its explicit depictions of sex and drug use.

Among the novels Burroughs was working on at this time was Naked Lunch, now considered among the key works of 20th-century US literature. The book was published in Paris by Maurice Girodias's Olympia Press in 1959. Somewhat in the grand tradition, the book was deemed obscene in Burroughs's home country, and a US edition did not follow until 1962.