Elgar’s first orchestral masterpiece is a set of variations on an original theme, for orchestra. Precedents for orchestral variations from composers Elgar greatly admired include Brahms’s ‘St Anthony’ Variations op. 56 (1873), using a theme attributed to Haydn, and Dvořák’s ‘Symphonic Variations’ op. 78 (1877), based on an earlier work of his own. Elgar’s works shares an overall structure with these: the theme is introduced, followed by 14 discrete variations of varied character, the work rounded off with a longer finale.

The title-page of the autograph reads ‘Dedicated to my friends pictured within. Variations for orchestra composed by Edward Elgar op. 36’ (no mention of any ‘enigma’). There are precedents for musical portraits in Mozart, Schumann and Tchaikovsky. Portraiture allowed Elgar the freedom to write variations that depart from the structure and harmonic layout of his theme, unlike the stricter variations of, for instance, Bach or Brahms.

At the head of each variation, the friends are identified by initials, or are otherwise lightly disguised. Elgar told A.J. Jaeger (Var. IX, ‘Nimrod’) that this private matter was of no interest to audiences. The friends were mostly from Mrs Elgar’s social circle (a cut above Elgar’s, whose father was ‘in trade’). Only three were professional musicians: ‘Nimrod’, who worked for Elgar’s publisher Novello; Var. XI, ‘G.R.S.’, George Sinclair, organist of Hereford Cathedral (though the variation concerns the antics of his dog, Dan); and Elgar himself, in the finale, lightly disguised as ‘E.D.U.’ (‘Edu’ was his wife’s affectionate reduction of ‘Edward’). 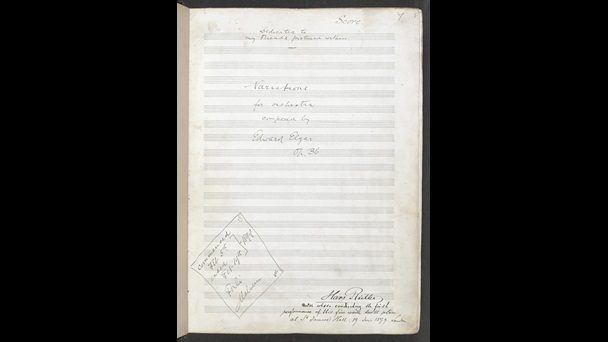 The 'Enigma' Variations was the first work to bring Elgar to public recognition. This is the full score of this work in the composer’s own hand.

Elgar thought of including ‘Parry’ and ‘Sullivan’, senior composers who had helped him, but decided he should not play the game of composing in their styles (as did Schumann with ‘Chopin’ and ‘Paganini’ in Carnaval). Another musician eventually omitted was Ivor Atkins, organist of Worcester Cathedral; sketches show an idea labelled ‘I.A.’, eventually transferred to Var. III, ‘R.B.T.’ (Richard Townshend).

The probable exception is Lady Mary Lygon, ‘L.M.L.’ in the sketches. Eventually Var. XIII was headed ‘(***)’. Much later, Elgar said that the ‘pretty lady’ dedicatee was on a sea-voyage at the time of composition; the music suggests the noise of engines, and quotes Mendelssohn’s Calm Sea and Prosperous Voyage. Lady Mary was soon to embark for Australia, and this was presumably no secret, but at the time of composition she was still in Worcestershire. This discrepancy, and the asterisks, have encouraged speculation that Elgar had someone else in mind, perhaps his first fiancée, Helen Weaver, who had emigrated years before to New Zealand. But it is just as likely that Elgar, some thirty years later, simply misremembered. There seems no definitive answer to this puzzle, which is not the principal ‘enigma’ over which argument still simmers.

If his later account is to be believed, Elgar hit on the theme while improvising at the piano (21 October 1898, soon after the premiere of his Leeds Festival cantata Caractacus). He amused himself and his wife by varying it as their friends might have done ‘if they were asses enough to compose’. He developed the ‘portraits’ on paper, completing the score, according to his note, on ‘Feb 18 1898’ (although it was actually 1899). Soon he was playing some of the variations to friends. 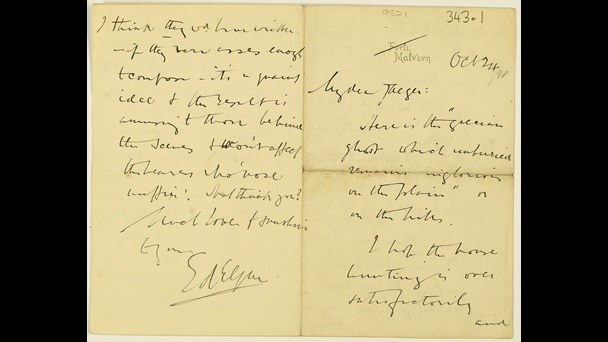 In this letter Elgar mentions to his close friend and publisher August Jaeger that he has started working on a set of variations. These later became known as the 'Enigma' variations.

Elgar sent the score to the agent of the Austro-Hungarian Hans Richter, who agreed to conduct it. The endorsement of so prominent a figure (conductor of the first complete Ring cycle at Bayreuth in 1876) was of inestimable value to Elgar, enabling him at 42 to escape the perception that he was merely a provincial musician in a nation prone to musical xenophilia. The premiere (St James’s Hall, London, 19 June 1899) was immediately understood as an important event; the music’s outstanding quality was recognized by such musicians as Hubert Parry and the young Gustav Holst. The work was soon taken up by other conductors at home and abroad. Elgar’s most productive twenty years followed, including further recognition overseas, mainly in Germany and the U.S.A.

What was it (and is it) about the music that inspired such immediate and lasting recognition? One element is its orchestral mastery. The word ‘orchestration’ may seem inappropriate; this is music composed for orchestra. But Elgar, though largely self-taught, had some respect for ‘orchestration’ as the realisation in full colour of music that nevertheless makes sense in monochrome, on a piano. A number of his works, including the Variations, were published in versions for solo piano or for piano, four hands, as was normal at a time when recording had barely been invented. Such arrangements had a better sale than full orchestral scores, with the music adapted to lie under the hands, so that its melodies and harmonies could be relished in the home. The solo piano version has been separately recorded, despite the existence of many fine orchestral recordings.

Also important was Elgar’s freedom, in creating unforgettable miniatures – some of them variations only in name. ‘Dorabella’ is called ‘Intermezzo’, and barely touches on the theme; the finale is a symphonic expansion of the theme, incorporating material from two variations (‘C.A.E.’ and ‘Nimrod’), and new themes of its own. Elgar proved wonderfully inventive in deriving from the theme musical images of markedly different character. Var. I ‘C.A.E.’ (his wife, not yet Lady Elgar) is the variation closest to the theme, but it includes new material (Elgar’s whistle that said ‘I’m home’) and the work’s most emotional climax. Elgar played violin in a piano trio with the pianist Hew Stuart-Powell (Var. II, ‘H.D.S.P.’) and cellist Basil Nevison (Var. XII, ‘B.G.N.’); their playing is reflected in these variations. The viola is represented in ‘Ysobel’. Richard Arnold’s laugh  (Var. V, ‘R.P.A.’) and ‘Dorabella’s’ light stammer have also been identified in the music, as has the energy of ‘Troyte’ and the atmosphere of the Norbury home. Elgar’s perception of all these people (and the dog) may be directly inferred from the music, and his later account (My Friends Pictured Within, 1929) tells us all we need to know. 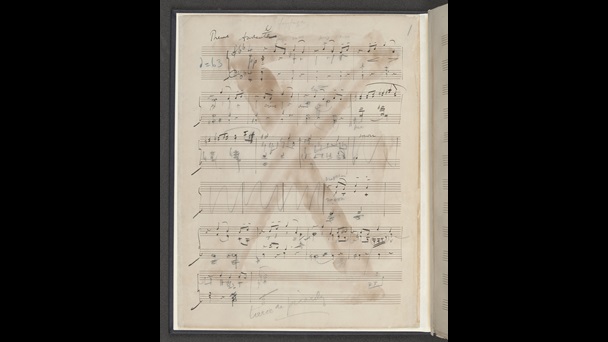 Elgar’s sketches for the 'Enigma' Variations reveal his initial ideas for the variations and characters portrayed in this work.

The identities of the friends were never much of a mystery, and were not the enigma. Elgar did not write ‘Enigma’ on the autograph; it is in ‘Nimrod’s’ hand, and not on the title-page, so perhaps it only applies to the theme. However Elgar, assisting with the original programme-note, encouraged speculation by mentioning a ‘dark saying’ that ‘must be left unguessed’, as if he would prefer us not to try to penetrate any possible mystery (a prohibition that has deterred nobody).

Also in the programme-note is Elgar’s odd statement that ‘over the whole set another and larger theme “goes” but is not played’. This cannot be meant literally; no musical theme could combine with a ‘whole’ of nearly half an hour. Rather than a tune, it has been suggested, ‘theme’ could be a metaphor for an idea, perhaps ‘friendship’. Perhaps the original programme note was mainly intended as publicity, to attract interest in a work by a composer almost unknown in London. Elgar seems later to have been embarrassed by the fuss made of this aspect of the story of his variations. Efforts continue to be made, however, to follow ‘Dorabella’s’ assertion that everyone assumed that the mystery involved a tune.

Some have tried explanations based on the theme itself: how original was it? Elgar had recently heard Mozart’s ‘Prague’ symphony, and a motif in the second movement corresponds to the opening of the theme; perhaps he recalled this recent performance as he improvised. But the interval-series that opens the theme is common property. It occurs in many earlier works including Caractacus and, notably, Arne’s ‘Rule Britannia’; the latter has suggested another candidate for a metaphorical ‘larger theme’, patriotism.

Actual tunes have been written and played over the theme, generating heated debate, although the results, as counterpoint, are of variable plausibility and none is really even as clean a ‘fit’ as Elgar’s ‘jape’, in which he combined Tchaikovsky’s ‘Pathétique’ with the National Anthem. Tunes proposed include ‘Auld lang syne’, appropriate for ‘friendship’; but Elgar vehemently denied the connection.

Since he cannot have composed all the variations, given their different lengths and keys, as a counterpoint to the same tune, finding one that fits the theme doesn’t resolve the enigma of the ‘larger theme’. ‘Dorabella’, whose husband hit on ‘Auld lang syne’, sadly concluded that Elgar’s denial had been a lie. Since the figure of Britannia appeared on the pre-decimal penny, ‘Rule Britannia’ could explain why Elgar told Dora Penny that she ‘of all people’ should to be able to guess the ‘solution’. That her father was a clergyman, however, is hardly a reason for her ‘of all people’ to spot a tune that everyone else would also have known, such as an Anglican hymn; and some hymns that have been suggested are stridently Protestant, although Elgar was a Roman Catholic.

Well over a century after the work’s composition, it is perhaps better to agree with Elgar’s biographer Michael Kennedy that there may be no great mystery to solve, and with the composer, as reported by his first major biographer, Basil Maine, that ‘the listener should hear the music as music, and not trouble himself with any intricacies of “programme”’.