The composer Anthony Payne, who completed Elgar’s unfinished Third Symphony, describes Elgar’s compositional methods as seen in the surviving sketches for this work at the British Library.

There are probably as many ways of creating a work of music as there are composers achieving it: ranging from those who organise every detail in their heads and then quickly write out the finished piece, to those who sketch ideas out of chronological order and in various stages of development before placing them satisfactorily in a continuous process. Then there are those who use a keyboard to bring their ideas alive, as against those who have no such need. We may cite Mozart, as one who did most of his composing in his head, whereas Beethoven sketched, erased and crossed out continuously until the work finally emerged.

Elgar employed a highly personal mixture of these methods, which I became conversant with in my efforts to complete his Third Symphony, left only half finished at his death – methods, moreover, which were totally different from those which I employed in my own music. His procedure might be loosely compared to that of completing a jigsaw puzzle, but without always having a clear view of the finished work. That could emerge at a late stage in the creation. In the First Symphony, for example, his neat copy of the full score had reached the finale’s development section when he suddenly realised he had not supplied the movement with enough thematic material. He tore open the score and slotted in a new second theme, which then had to be woven into the development section.

Looking for the first time at the sketches for his Third Symphony which he had accumulated by the time of his death, one can see strong evidence of his jigsaw methods: there are a number of broad sections for all four movements, including a complete exposition and virtually complete recapitulation for the first. At the same time there are numerous shorter ideas – motives, phrases and paragraphs – initially of doubtful significance and often with little indication of their structural purpose.

They cannot, however, be seen as evidence of what stage Elgar’s composing had reached, because various reports from friends who had been around during the composer’s last year mention that he had given virtually complete performances of the symphony at the piano. The sketches must have marked an earlier stage in its composition. It is highly likely that by now the whole work was lodged in his mind, especially as one of the most valuable of the sketches was hardly that – rather the opening of the symphony in full score, showing that Elgar was beginning to write out the complete work, just before going into hospital where the unexpected diagnosis of terminal cancer spelled the end of his creative activities. 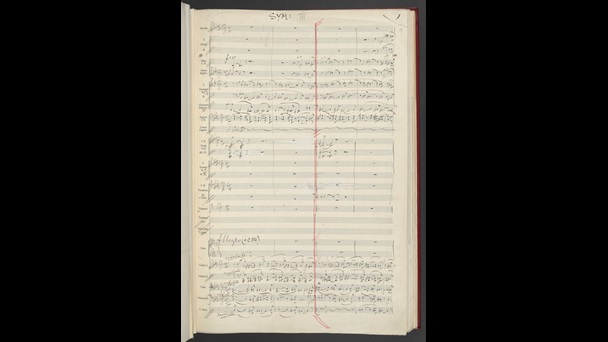 The sketches for Elgar's unfinished Third Symphony range from short ideas only a few bars long to entire passages written in full score, showing different stages in the work's development.

Usage terms Reproduced by kind permission of the publishers: Boosey & Hawkes Music Publishers Ltd. Except as otherwise permitted under your national copyright law this material may not be copied or distributed further.

One of the most intriguing and indeed controversial aspects of the material which Elgar bequeathed us is the evidence it gives of his use of ideas originally intended for other works, some never realised, such as The Last Judgement, which would have formed a trilogy together with The Apostles and The Kingdom, but others successfully completed, like the incidental music for the play King Arthur. 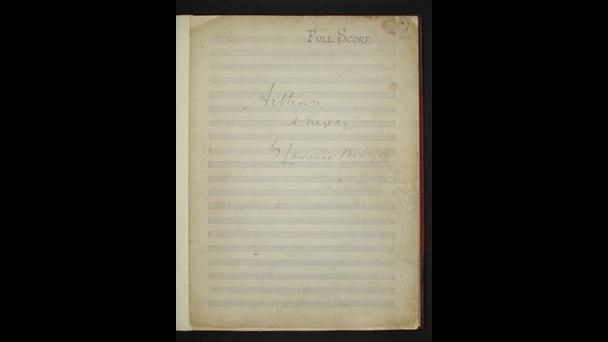 Self-borrowings from earlier works were quite common in Elgar’s output. The music for Arthur, unpublished in Elgar’s lifetime, includes some sections that would be incorporated into his unfinished Third Symphony.

The latter was to have been re-used in both the scherzo and the finale of the symphony, and would have significantly coloured its emotional world. It has been argued that such self-borrowing robs the work of artistic integrity, but this criticism does not stand up to close scrutiny. It is worth remembering that the glorious finale theme of Beethoven’s A minor Quartet had originally appeared in sketches for the Ninth Symphony, while the slow movement of Elgar’s own First Symphony had been intended for a string quartet which never materialised. We must deduce that musical ideas are often flexible enough in their meaning to find a satisfactory place in differing contexts, to be subsumed by a broad and powerful vision. The overall concept of the Third Symphony possessed just such a power and could gather to itself apparently contrasting ideas, moulding them into a convincing whole.

We must ask, however, where these various and perhaps not immediately related ideas came from in the first place. Many stories recounted about the composer, which span much of his creative life, suggest that keyboard improvisation was vital to the creative process. We hear of Elgar sitting at the piano after a hard day’s teaching, and drawing the attention of his wife Alice to an idea he was toying with. She quizzed him about it, but Elgar failed to catch on, continuing to doodle until she noticed it again. ‘Oh that’ said the composer, ‘That’s nothing, but perhaps something could be made of it.’ He had begun the ‘Enigma’ Variations, but was initially unaware, until focussed by Alice. Individual variations followed within a week and were played for various friends while being improvisationally adjusted, and a short time later he wrote out the full score in just two weeks. The nature of the improvisational practice that launched the ‘Enigma’ Variations can perhaps be deduced from a recording Elgar made in 1929 of a set of five free improvisations, all of which seem to show ideas which could have grown to significance if they had been worked upon, but which floated in and out of every day accompaniments awaiting visionary injection.

Nearly all the ideas for the Third Symphony were initially written down as if for two hands at the keyboard, suggesting they were conceived through that medium, some texturally complete, but others only half-formed, perhaps as an aide memoire for music that was fully formed in Elgar’s mind. Significantly they include very few indications of the orchestral sonorities he intended, and again we must assume that this aspect of the score was always in his head. It does not imply that the orchestral sound had yet to be decided, given the astonishing speed with which he always wrote out his full scores.

The nature of the alchemy which could blend such an apparently heterogeneous collection of thoughts into one grand and all-embracing statement is well-nigh impossible to define – such is the nature of creative genius. But we can imagine that when Elgar received his commission from the BBC for a new symphony, he thought of preserving ideas from his horde of unused sketchbook material, and, over and above this, attempting an all-embracing summary of his life’s symphonic achievement – heroic, tragic, heraldic and lightweight-nostalgic worlds of feeling abound, covering a wider range of emotion than any other of his symphonic works.

My efforts to extend these ideas and place them in a meaningful context depended on detective work and, more importantly, intuition, since the sketches rarely made the overall structure clear, in some cases even failing to allot an idea to a particular movement. I lived with these ideas for around 20 years before I became actively compositional with them, and had frequently relished the hints at a great symphonic journey which they threw out.

Naturally I bore in mind my intimate acquaintanceship with all of the composer’s major works when filling out the spacious four-movement structure, but most importantly I relied on those thoughts that appeared to come from nowhere. These certainly allowed me to fill out the broad tracts which were missing from the sketches: Elgar’s known intentions could supply only half of the work, the rest including nearly all of the orchestration required of me hard core composition intuitively carried out. In this I hope I got as close as is possible to the composer’s complex creative being.

https://sounds.bl.uk/resources/Music-since-1900/ElgarPayne%20Symphony%203.mp3
Update Required To play the media you will need to either update your browser to a recent version or update your Flash plugin.