Music and the First World War

Kate Kennedy examines the impact of the First World War on British composers and the music composed both during the war and in its aftermath.

The First World War is now remembered through its literature perhaps more than any other art form; we are all familiar with the traditional canon of war poets, with Siegfried Sassoon and Wilfred Owen. However, we are considerably less familiar with the response of classical musicians to the war, both during and after the conflict. One soldier/composer, Ivor Gurney, even combined identities as a war poet and a composer, suggesting that there was a genre of composition that has not yet been defined – if we can accept the ‘war poet’, then were there in fact ‘war composers’? The answer is yes, but, as in literature, there were many different voices writing music from many different perspectives, both civilian and combatant.

The war had come at a time of transition for English composers. The older generation of Sir Hubert Parry, Sir Charles Villiers Stanford and Sir Edward Elgar were at the end of their reign, and a younger generation (of enlistment age) were being trained up, largely by the Royal College of Music. Ivor Gurney, Arthur Bliss and Herbert Howells were all students in 1914. Ralph Vaughan Williams, approximately a decade older than the undergraduate composers, interrupted his work to enlist. Of those composers who went to fight, George Butterworth, F S Kelly, William Denis Browne, Ernest Farrar, the Royal Academy’s young star Willie Manson, and the Scottish composer Cecil Coles did not survive. Of these, George Butterworth is perhaps the best known. His exquisite settings of the poems of A E Housman, all written in the years leading up to the war, are still much loved. A E Housman’s poetry frequently returns to the idea of ‘lads that will die in their glory, and never be old.’ Butterworth’s own death on the Somme makes his songs into a poignant premonition of his own premature death. 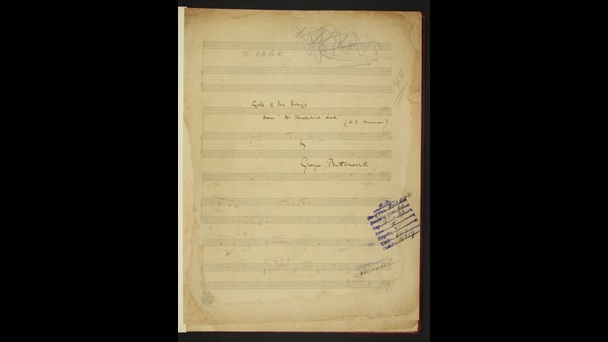 George Butterworth’s settings for voice and piano of poems from A.E. Housman’s A Shropshire Lad are among his best known works.

Ivor Gurney returned after 15 months at the Front, having been shot and gassed, but with five of his most enduring songs, some written practically in the front line. One mud-spattered manuscript, a setting of ‘By a Bierside’, was written by the light of a stump of candle in a trench mortar emplacement. Ernest Moeran, composer of exquisite songs, returned with a drinking problem from his stint as a motorbike dispatch rider, and a large piece of shrapnel in his head; and Vaughan Williams returned from his work with the Medical Corps saddened and traumatised by what he had experienced. And yet, this seemingly shattered generation was to prove the vanguard of a renaissance in British music in the post-war years. They poured their experiences into works such as Vaughan Williams’ Pastoral Symphony (1921), an understated and achingly beautiful monument to loss, with bugle calls echoing across the French landscape. 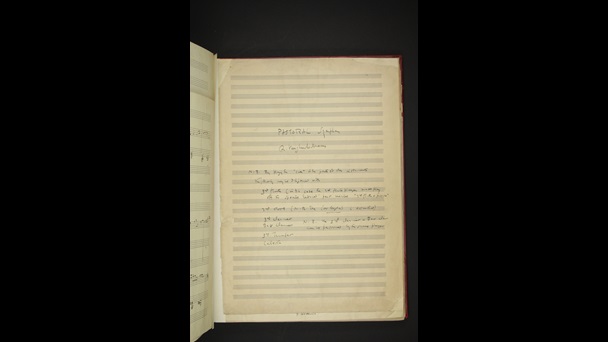 Vaughan Williams’s Pastoral Symphony, composed in 1921, was inspired by the landscape in northern France where the composer served during the First World War in 1916. This is the full score of this work in the composer’s own handwriting.

Letter from Holst to Vaughan Williams (1933) 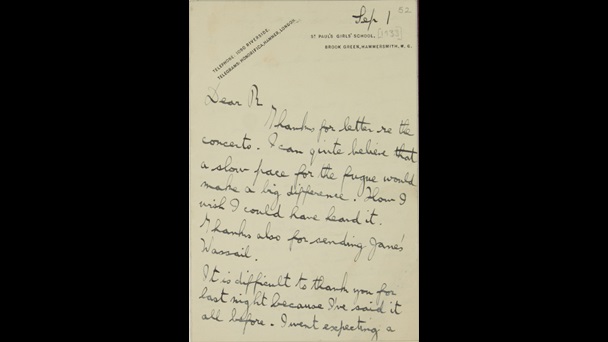 Vaughan Williams had just finished his beautiful pastoral Lark Ascending when the war broke out. It is still a perennial favourite, and has rather overshadowed the more turbulent and troubled works he was to write as his long career progressed. His Pastoral Symphony was inspired not by the English idyll he had drawn on before the war, as was erroneously assumed at the time, but the French landscape he had recently left, with its incongruous combination of beautiful sunrises and unimaginable destruction. 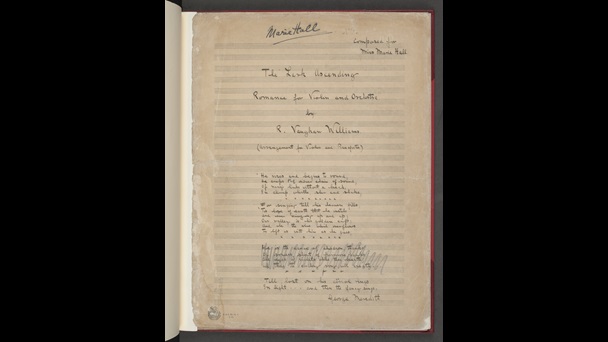 This manuscript, a fair copy of Ralph Vaughan Williams’s arrangement for violin and piano of one of his most popular works, The Lark Ascending, contains extensive cuts, additions and corrections in the composer's hand.

https://sounds.bl.uk/resources/Music-since-1900/Vaughan%20Williams%20The%20Lark%20Ascending.mp3
Update Required To play the media you will need to either update your browser to a recent version or update your Flash plugin.

The war affected the work and lives of composers in innumerable ways, just as it affected almost every aspect of civilian life. Before 1914, British music making and the repertoire taught in music colleges had been overwhelmingly reliant on German composers. Brahms, Strauss and Beethoven were staples of the repertoire for the generation of young composers who went to fight. Concert series such as Henry Wood’s Promenade Concerts, or The Proms as they are now better known, changed their programming to shift the bias from German to allied nations’ music. Many musicians had been travelling or working in Germany at the outbreak of hostilities.

Composers such as Edgar Bainton, Benjamin Dale and the young composer / conductor Ernest Macmillan were rounded up and interned in cramped horse stalls on Ruhleben racecourse, in the suburbs of Berlin. There they quickly founded orchestras, choirs and a whole education programme for the benefit of the 5,000 other prisoners, who found themselves treated to all-male performances of Gilbert and Sullivan’s Mikado, with improvised costumes, and lectures on the history of music. Macmillan even completed a doctorate, conferred by Oxford, for his composition England, an Ode while interned there. The performers and composers who spent four years there saw at first hand the importance of music for the internees’ psychological well-being. They took the organisational and compositional skills they learnt in the camp back into civilian life, influencing the running of music colleges, opera houses and major music festivals across the UK, Canada and Australia.

Composition on the home front

It was, of course, more difficult for composers to write whilst on active service, and the majority of music written during the war was composed by those too old or unfit to serve. These pieces are a barometer for the needs of the time – music serves a public need as well as being a vehicle for private emotion. The variety of approaches was as multifarious as people’s experiences and perspectives on the war itself; from the pacifist Frank Bridge’s deeply disturbed Lament (1915) for a girl who died on the Lusitania, to Edward Elgar’s hearty setting of Rudyard Kipling’s Fringes of the Fleet, written in the same year.

Composers such as Elgar, Stanford and Parry felt strongly that they should write works that met the general populace’s needs to mourn, commemorate, celebrate and raise spirits. There were calls in journals such as The Musical Times for composers to write ‘the piece of the war’ that might speak both for and to the British people. Since his much-loved 'Enigma' Variations of 1899, Elgar had been the unofficial king of English music, and the responsibility of writing for the public fell heavily on his shoulders. He wrote a handful of rousing war works such as Carillon, written in anger at the suffering of the Belgian people in 1914. His most enduring wartime composition was The Spirit of England (1916–17), which set texts by poet Laurence Binyon, best remembered now for his words used as part of the armistice commemoration services across the country: ‘they shall not grow old as we that are left grow old…’  As the war progressed, peoples’ emotional needs changed, and by the end of the conflict the emphasis was far more on a piece that would express people’s grief, and serve as a memorial to the dead.

Music, like sculpture, had a central role to play in public and collective mourning. With the leisure that peace provided, both ex-combatant and civilian composers set to the task of writing musical memorials. Works written specifically to remember included John Foulds’s eccentric epic World Requiem (1919–21), which required 1,250 performers, and Arthur Bliss’s ‘symphony on war’ for orchestra, narrator and chorus entitled Morning Heroes (1930). Often, as in the case of Bliss, such public works were written as an act of private catharsis, in his case to exorcise war-related nightmares, and to honour his brother, who was killed on the Somme.

One of the texts he chose to set was a poem by Wilfred Owen, whose poetry has now become so well known that it is impossible to separate our understanding of the war from his viscerally depicted trenchscapes. Back in 1930 he was far less well known, and Bliss’s chilling setting of his poem ‘Spring Offensive’ for only a narrator and timpani was a devastating shock for audiences – the thumping of the guns were brought to life in the concert hall, over a decade after they had been silenced.  This dramatic work paved the way for Benjamin Britten’s War Requiem, written in 1962 in the aftermath of the Second World War but with its roots firmly in the First, as it combines the Latin Requiem Mass with Owen’s poetry. The legacy of the First World War composers, shaping their experiences into sound, stretched through the 20th century and beyond. Standing on their shoulders, composers such as Nico Muhly, Anthony Ritchie, Tim Watts and Mark Anthony Turnage are finding new ways to construct musical memorials to commemorate the centenary of the war. 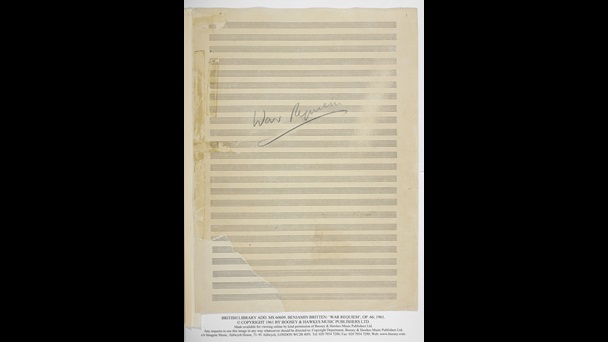 Benjamin Britten’s draft score for the War Requiem is written in pencil and comprises the complete composition in a reduced scoring, together with additional discarded draft material.

Usage terms Reproduced by kind permission of the publishers: Boosey & Hawkes Music Publishers Ltd.  Except as otherwise permitted under your national copyright law this material may not be copied or distributed further.
Held by© Boosey & Hawkes

https://sounds.bl.uk/resources/Music-since-1900/Britten%20War%20Requiem%20R%20Aeternam.mp3
Update Required To play the media you will need to either update your browser to a recent version or update your Flash plugin.